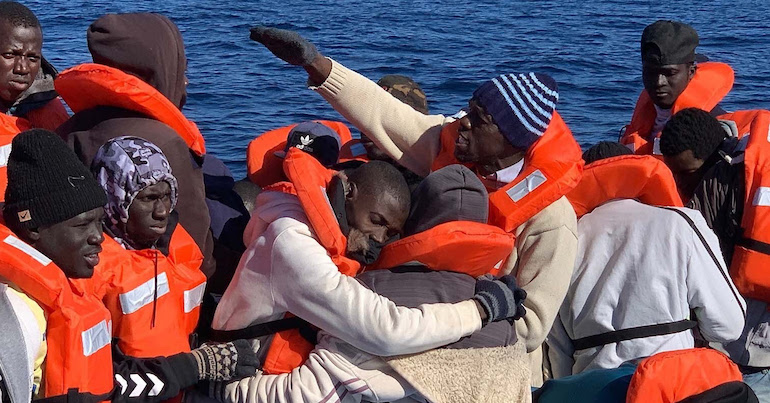 It’s one month into 2019 and, according to UN figures, at least 185 people (refugees and asylum seekers) have been reported dead or missing after trying to reach safety in Europe by sea. Since August 2018, voluntary rescue boats have been deliberately grounded. As The Canary reported, this means thousands more people risk drowning in the Mediterranean.

The Canary spoke to a volunteer onboard Sea-Watch 3, the only rescue boat currently able to save lives. They’ve just rescued 47 people and gone through a cyclone. But now they’re stuck and the situation is critical.

Yet the UK stays silent.

On 20 January, the Sea-Watch 3 crew rescued 47 people, including eight unaccompanied children, from a dinghy in international waters north of Libya. As a Sea-Watch press release explained, just 24 hours earlier, another 117 shipwrecked people died.

Dan Bebawi spoke to The Canary from the Mediterranean. He explained that Sea-Watch 3 is “the only rescue vessel in the Libyan search and rescue area” because “the others are all detained in port or have been refused a crew change”.

But the crisis in the Mediterranean doesn’t stop.

On 19 January, Sea-Watch heard an Italian military helicopter over the radio, talking “about a boat that was partially deflated” and reports of “people in the water”. It took Sea-Watch “about 12 hours” to locate and they “went full speed for another ten hours” to find the boat. As far as they’re aware, only three people survived. Italian military had returned those survivors to Libya by the time Sea-Watch arrived.

EU policy has cost 170 lives in the Mediterranean this week. As the only civilian rescue vessel left, we are taking care of those rescued yesterday and are heading for another boat in distress 10 hours away.#United4Med pic.twitter.com/zkDvxHFF5t

The following morning, Moonbird – the Sea-Watch reconnaissance plane – saw another dingy. The crew managed to find it and rescued 47 people who are now on board. As an Arabic speaker, Bebawi’s been trying to contact Libyan authorities since Italy claims it’s “not their rescue area”. But he says there’s no response from Libya – they simply won’t answer phone calls. “They’re basically non-functioning,” he explained. But there’s a further issue. The boat can’t return to port to get survivors to safety.

Sea-Watch 3 rescued 32 people, including three children, on its last mission. But the boat was forced to stay at sea for 19 days because Italy and Malta (the nearest ports) refused entry. “Finally the EU came up with a solution,” and eventually survivors got permission to disembark – they’re “currently in a detention centre in Malta”. They still need to wait for EU countries that might accept them as asylum seekers. Bebawi thinks they’ll face a similar situation with the 47 survivors currently on board. As he explained:

We’re a rescue operation and we’re simply not equipped to look after people long term at sea. There’s also a massive storm coming in… the waves will get to four or five meters. The ship will be safe, but it’s not going to be pleasant. Our role should be to look after people for a couple of days and get them to safety. But since Italy closed its ports to us and other countries are unwilling to let us in, we have to maintain peace and health for an extended period. It’s really difficult. But it’s also completely illegal.

For all those who find 7 meter waves in the #Mediterranean hard to imagine:

At 2m life is getting uncomfortable on #SeaWatch3.

At 4m the ship turns quiet – whoever can stay in bed, does so.

At 5m we start worrying.

As Bebawi pointed out, under human rights law, “there’s a clear obligation rescue people at sea and offer a safe place to disembark”.

On 24 January, to shelter from the storm, Sea-Watch 3 anchored in Santa Pelagia Bay, Italy and made an urgent request to allow passengers to leave the boat. At the time of writing, they’re still being refused entry. Bebawi says they’re still there, waiting but “hoping for movement soon”. This also means there are no other boats available to rescue anyone else.

Returning anyone to Libya is simply not an option. As Human Rights Watch reported on 21 January, it’s a “nightmare” situation. Judith Sunderland, associate director of the Europe and Central Asia division at Human Rights Watch, said:

Migrants and asylum seekers detained in Libya, including children, are trapped in a nightmare, and what EU governments are doing perpetuates detention instead of getting people out of these abusive conditions.

The UK is fully complicit in this. Chaos followed the NATO bombing campaign of Libya in 2011. Former prime minister David Cameron was instrumental in a military assault that left the country both splintered and a perfect playground for terrorists. But not only did the UK play a leading role in the bombing campaign, it also facilitated unrest in the country while Muammar Gaddafi was in power.

Bebawi said Italy and other EU countries are, currently “enabling the Libyan Coast Guard to intercept people” at sea, only to “return them to cruel, inhuman, or degrading treatment in Libya”. This amounts to “aiding or assisting in the commission of serious human rights violations”.

As Bebawi said, “for the EU to refuse entry is completely illegal”. Many people they’ve rescued have tried to escape several times, but the Libyan coastguard picks them up and returns them back to detention. From there, “people traffickers see them as a commodity”, and buy them “directly from detention centres”.

Bebawi explained that the survivors on board have already faced “every horrible, disgusting thing you can imagine in Libya”. People traffickers “extort money from families” to ‘pay’ for the dingy rides to ‘safety’. Others are forced into slave labour to pay for the trip. This continues because, as Bebawi said, “there is no authority in Libya”. He continued:

There are six different governments. It’s incredibly complicated. But they’re entirely reliant on the militias. Ultimately the militia does what they want… It’s utter chaos. People live in constant fear… There’s no safety, security or law and order.

People head to Libya to escape from other brutal regimes, famine, and economic instability throughout Africa. This mission rescued people from Mali, Gambia, Sudan, Guinea, Guinea Basa, Ivory Coast, Sierra Leone, Senegal, and the Central African Republic. Eight are unaccompanied children. Before arriving in Libya, many “travelled thousands of miles, often through desert”. It’s not a journey anyone undertakes lightly.

For Bebawi, there’s one key way to stop this situation: “more co-operation between European countries”. He continued:

The reason this is such a mess is that the EU abandoned Italy and Greece to deal with the crisis. Part of the reason Italy’s got a right-wing government and closed its ports is because the rest of Europe left them to it. It didn’t help with the redistribution of people, it didn’t help them with finances or resources for rescue operations. Italy’s initial response was incredible… but the EU abandoned them. That lead to resentment in Italy and.. to a right-wing government which closed its ports and persecuted rescue operations.

The EU needs to come up with a workable solution for redistribution and the asylum process so that people don’t need to claim asylum in the country of arrival. This is the largest movement of people in living memory. It’s not going to stop. All the EU can determine is how many people will die trying to get to Europe.

“The EU,” he feels, “is using the Mediterranean as a moat”. If people could leave ships in Italy and travel safely to countries “like Portugal”, this would prevent further distress for people “who are already traumatised”.

As Sea-Watch 3 tries to find safe harbour for the 47 people on board, many more refugees still face distress and death at sea. After the Sea-Watch rescue, they heard reports from AlarmPhone of another boat – carrying around 150 people – in distress. It’s thought there were around 60 people onboard, including pregnant women. They were rescued but returned to detention in Libya. In just one week, AlarmPhone has picked up alerts of six boats in distress. But Sea-Watch is the only boat operating in a vast area.

There’s barely any coverage of this crisis in the UK media. As Bebawi said, “imagine if one boat with two westerners went missing? There’d be instant international outrage and a huge rescue mission”.

The UK media and government are complicit through silence. Yet until action is taken, these tragedies won’t stop. As death statistics rise, we must remember, these aren’t numbers: they’re people.