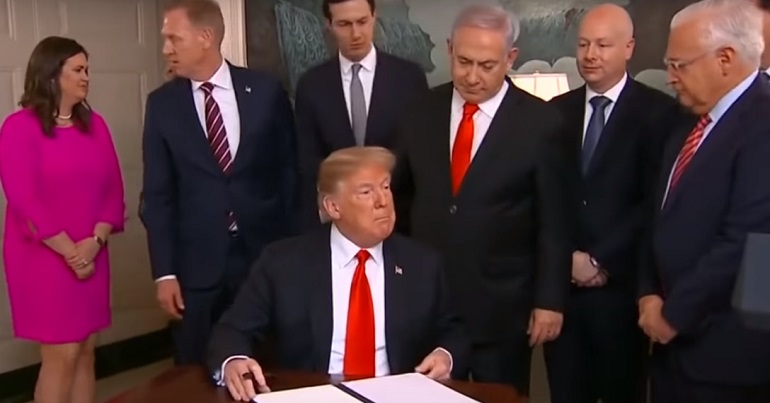 The major conclusions of the ‘Mueller investigation’ have just come out in the US. Mueller didn’t find significant evidence of alleged Russian collusion in the 2016 US elections. So the whole exercise has in many ways been a waste of time. It’s also diverted precious resources and media attention away from Donald Trump’s actual crimes (past and present). And it’s bolstered his claim of being subjected to a ‘witch hunt’ by a ‘Washington elite’ ever since taking office.

The obsessing over Russia has also obscured a far more destructive relationship that Trump has been nurturing with Israel.

On 24 March, the US attorney general released a summary of findings from the probe led by special counsel Robert Mueller, which focused on allegations of Russian collusion with Trump’s election campaign. It states that:

[W]hile this report does not conclude that the president committed a crime, it also does not exonerate [Trump].

Trump claimed this was a total vindication (it wasn’t). He also showcased some of his usual authoritarian tendencies. In a thinly-veiled threat to political opponents connected to the investigation, for example, he said:

There are a lot of people out there that have done some very, very evil things, very bad things—I would say treasonous things—against our country… Those people will certainly be looked at.

Establishment Democrats essentially presented Trump with this open goal. And their allies in the establishment liberal media fanned the flames. Award-winning journalist Glenn Greenwald described their role as “the saddest media spectacle I’ve ever seen”, pointing out that the investigation has diverted precious attention away from stories of real importance.

Not least of these important stories is Trump’s bootlicking of the hard–right Israeli government of Benjamin Netanyahu. And the timing of the release of the Mueller report couldn’t have been more apt. Because just as it hit the headlines, other reports highlighted the extent to which Trump is kowtowing to Netanyahu’s extreme agenda.

On 25 March, just a day after the release of the Mueller summary, Trump officially recognized Israel’s claim to the occupied Golan Heights. He was even joined at a White House signing ceremony by Netanyahu himself. The latter was in Washington to speak at the annual conference of the American Israel Public Affairs Committee (AIPAC).

Israel took control of this territory from Syria during the Six Day War in 1967 and annexed it in 1981. The UN and the vast majority of countries consider both the occupation and annexation to be illegal under international law. Even the US had accepted this position for decades.

Trump’s meeting with Netanyahu also came as Israel launched a fresh round of attacks on Gaza. Over the weekend, meanwhile, Israeli soldiers shot dead at least three Palestinians – injuring dozens more – who were participating in the ‘Great March of Return’ protest.

Clearly, it is the Trump administration’s relationship with Israel, not Russia, that the media should be focusing on. But for the liberal establishment, Russia is a convenient scapegoat. After all, their own record of unbending support for Israel – no matter how low it sinks – is only marginally better than that of their Republican counterparts.

The US position has now gone from support for Israel’s right wing to support for its hard-right fringes. And ‘Russiagate’ has helped to provide a dangerous smokescreen for that shift.