Joe Biden is the worst choice to face Trump. The proof's in his fundraising efforts. - Canary 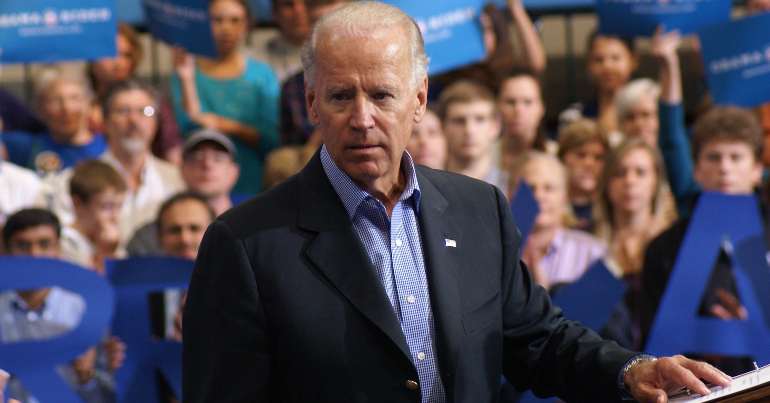 Former US vice president Joe Biden has been leading many polls for the Democratic Party nomination since announcing his candidacy in April. Some liberal commentators are describing him as “the best shot at beating Trump”. But as reports emerge of his controversial upcoming fundraisers, it’s important to remember that he represents the very same corporate interests as Hillary Clinton and Barack Obama. And that’s precisely why he’s the worst candidate to face Trump in 2020.

On 18 June 18, the Hill received information that Biden will be attending several events with wealthy donors in California to build his campaign war chest. Each of them will cost $2,800 a head to attend, with proceeds going directly to his campaign. Commentators expect him to raise between $20m and $25m by the end of his fundraising drive. And he’s already well on his way, having secured $6.3m in just 24 hours after announcing his intention to run for president. At a recent event in Los Angeles, he raised around $700,000 in just one day.

These figures speak volumes about the extent to which both Republicans and establishment Democrats have their pockets lined by wealthy interests. And this is nothing new. Because both Obama in 2008 and 2012 and Clinton in 2016 raised hundreds of millions of dollars for their presidential campaigns. Much of it came from corporate interests such as healthcare industry companies and financial institutions. In fact, these figures received more in Wall Street contributions than their Republican challengers, and were largely seen as Wall Street’s preferred candidates.

Once in office, Obama served these corporate interests as obediently as his predecessor. Far from working to reform the system that led to the 2007/8 financial crash, in which millions of people lost their jobs and/or homes, he followed the same neoliberal path that created it. He continued George W. Bush’s bank bailout program and appointed the very Wall Street insiders who had presided over the crash to prominent positions in his administration. And although he passed the Dodd-Frank legislation to increase regulations on Wall Street, the law was severely watered down; and it didn’t include the wide-ranging reforms expected from progressive campaigners. Bailouts to homeowners from the working and middle classes, who had done the least to cause the crash yet suffered the most from it, were meagre in comparison to the bank bailouts.

Clinton’s association with this utter failure and kowtowing to corporate interests, meanwhile, was a large part of why she lost the 2016 presidential race to Trump. Though it was a con job from day one, Trump consistently (and to a large extent successfully) portrayed himself as the champion of ordinary people left behind by an out-of-touch Washington elite. And he accurately painted Clinton as the very personification of the corrupt and self-serving establishment wing of the Democratic Party.

The heir to this toxic legacy

Today, Biden is the new heir-apparent to this toxic legacy of failure. After all, he was the vice president throughout Obama’s two terms in office. And the latest news about his fundraisers makes clear that he will be just as much of a corporate and Wall Street puppet as Obama and Clinton.

Senator Bernie Sanders, on the other hand, refused in his 2016 campaign to take any corporate campaign contributions from so-called Political Action Committees (PACs). Rather, he relied on large-scale small contributions from individuals. His average campaign donation was $27, which once multiplied many times made him so competitive that he very almost beat Clinton – and may well have done had it not been for the connivance of establishment party figures and the nefarious influence of so-called superdelegates. Sanders has also expressed a deep and nuanced understanding of how the influence of money has thoroughly corrupted US politics. And he has pledged to overturn the ‘Citizens United’ Supreme Court decision that decimated the few paltry campaign finance restrictions that existed before 2010.

In short, while Sanders represents a break from the corporate blackmail of current US politics, Biden is its very embodiment. That’s why progressives must fight tooth and nail against his empty brand of neoliberalism-lite that does nothing for ordinary people while emboldening right-wing conmen like Trump.