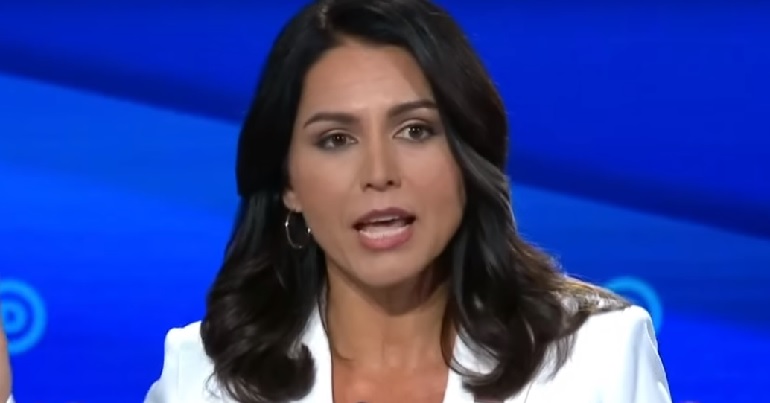 Establishment media outlets are openly smearing Democratic presidential hopeful Tulsi Gabbard. Why? Because the army veteran firmly opposes devastating US regime-change wars abroad, and she tells the truth about US links to terrorism.

The smears keep rolling in

Elitist mainstream media outlets in the US tend to support regime-change wars. And that seems to be the driving force behind their hostility towards Gabbard.

There is no question that Tulsi Gabbard, of all the 12, is a puppet for the Russian government.

.@Bakari_Sellers: "There is no question that Tulsi Gabbard is a puppet for the Russian government." pic.twitter.com/a5qtVjFu2i

The New York Times also put out a smear piece on Gabbard:

@cnn calls her a Russian asset and Assad apologist all the time. It’s nice to know this is how the elite treat veterans who have actually seen war. Anyway here’s the smear article from: @nytimes : https://t.co/0pPGVPnfeI

Speaking during the debate about US regime-change efforts in Syria, Gabbard spoke out against these smears, saying:

New York Times and CNN have also smeared veterans like myself for calling to an end to this regime-change war.

And she called this campaign “completely despicable”.

The smearing continued, however, with other establishment journalists accusing Gabbard of echoing “Russian talking points”:

It is a fact that the Russian talking point for years has been that the United States arms al-Qaeda in Syria. Tulsi Gabbard just said it on national television.

How odd to listen to Tulsi Gabbard mouthing Syrian and Russian talking points on the Democratic debate stage…sorry but no one thinks US troops withdrawn by Trump were there as part of a 'regime change war' by the US. It's as untruthful as anything from POTUS.

Gabbard has previously called Syria’s Bashar al-Assad a “brutal dictator” and has argued for the importance of diplomacy while vocally opposing “the illegal war to arm, fund and train terrorist-aligned rebels in Syria to overthrow Assad”. And despite her criticising Russia in the past, her campaign says opponents are resorting to “Russia-baiting propaganda” attacks against anyone “who speaks out against regime change war or the new Cold War”.

When the truth makes the rich and powerful feel uncomfortable, they’ll resort to smears

Gabbard has long criticised the close US relationship with Saudi Arabia, accusing the dictatorship of “both providing direct and indirect support directly to al-Qaeda” and calling it “the propagator of this Wahhabi-Salafist ideology that provides the fertile recruiting grounds for terrorist groups like al-Qaeda and Isis [Daesh]”. And she’s right on a number of fronts.

Don’t buy the smears. We need to listen to Tulsi Gabbard.

Notice that no one will refute Tulsi’s claim that US weapons/support helped Al Qaeda in Syria (because it’s true).

Indeed, the evidence is on Gabbard’s side. That’s why the rich and powerful probably hope US voters will just buy their smears and ignore her.

There are, of course, some positions from Gabbard that progressives could genuinely criticise. But her opposition to disastrous regime-change wars isn’t one of them. On that, she’s spot on – and we must resist the smears trying to convince us otherwise.