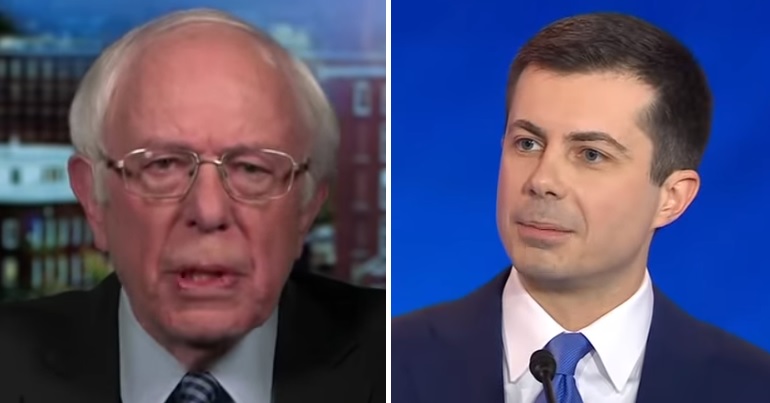 In the first vote of the Democratic primaries in Iowa, Pete Buttigieg emerged as the main challenger to Bernie Sanders.

The media has fawned over Buttigieg since before he officially announced his bid for the presidency in April 2019. That’s not surprising given his centrist positioning. But Sanders has pointed out an important fact about the former mayor of South Bend, Indiana, that voters should be wise to.

Since the vote in Iowa, Sanders has turned people’s attention to the source of Buttigieg’s funding. On 9 February, the Vermont senator appeared on Fox News. The anchor Chris Wallace posed the following question to Sanders:

Senator, I just asked mayor Buttigieg about your charges about him that he’s accepting money from billionaires. He says the point is you’ve got to build a coalition and accept money from all sources if you’re going to beat Donald Trump.

So the question is are you more interested in purity than you are in winning?

No, I am more interested in transforming this country and lowering the outrageous cost of prescription drugs, in making sure that every American has healthcare as a human right not a privilege, in making sure that our kids can afford to go to college and not leave school deeply in debt.

And here’s the problem, everybody knows this… It is the billionaires and the big money interests that control what goes on politically, what goes on legislatively, in this country. And if you do, as mayor Buttigieg does, take huge amounts of contributions from the CEOs of the pharmaceutical industry, from financiers in fossil fuel industry, from the insurance companies, from Wall Street, does anyone seriously believe that you’re going to stand up to those powerful entities and represent working people?

Sanders is right – it is common knowledge to most that those who throw money at politicians expect to get something in return – and often do. As Time magazine reported in 2019, Donald Trump has employed officials “tied” to the Koch brothers, who have used “millions of dollars to pervasively, perniciously and secretly influence” political decision-making in the White House and government agencies. There, those officials have:

So Buttigieg’s choice to accept money from 40 billionaires, second only to Joe Biden’s support from 44, should be a cause for concern for anyone who wants an unbeholden president.

In his bid to become president, Buttigieg has billed himself as “unorthodox” and an outsider of sorts. His funding from dozens of billionaires jars with this. The Grayzone has also recently reported on the mayor’s past positions within the US military, which suggests he was very much an insider when it comes to the US military / industrial complex.

The outlet has highlighted that a number of intelligence veterans are “throwing their weight” behind Buttigieg. In further reporting, it’s also discussed military documents which it says appear to show:

the former mayor worked alongside the CIA while serving as a high-ranking Naval intelligence officer during his short stint in Afghanistan.

Furthermore, the Grayzone reports that the unit Buttigieg served with – the Afghanistan Threat Finance Cell (ATFC) – “operated under the watch” of the Drug Enforcement Administration (DEA). The DEA, it notes, was “responsible for the disastrous war on drugs“.

The Grayzone says the collaboration between ATFC and the CIA is an “open secret”. It points to an Agence France-Presse article that describes the outfit:

Alongside his six months in Afghanistan, Buttigieg spent a number of years in the Navy Reserves as an intelligence officer. His press secretary has said he was not in the CIA. Giving an insight into his own views on his time serving abroad, Buttigieg tweeted in 2017:

Buttigieg’s support from the US billionaire class and his ties to the intelligence community suggest that, far from an unorthodox, non-establishment candidate, he’s very much drawn from the status quo.

Sanders is most certainly not. As the candidate who shuns billionaire backing and is critical of the oppressive overreach of the national security state, he’s promising to take on the establishment. As he explained during a recent event:

So voters looking for an anti-establishment candidate who’s willing to challenge the status quo need look no further than Sanders.