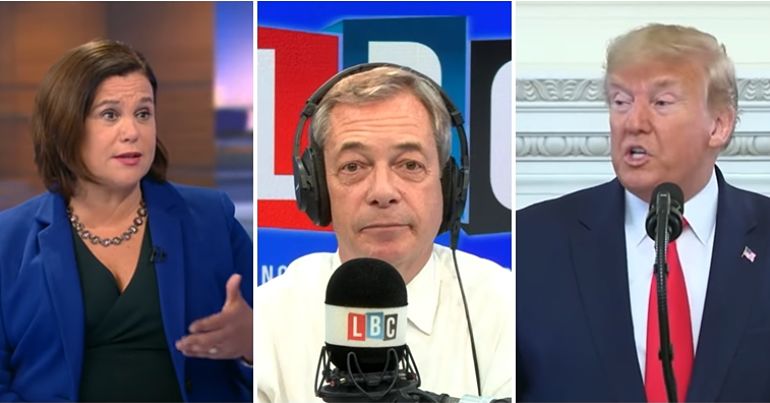 Staff writer at the Atlantic Yasmeen Serhan has written about the outcome of the Irish general election, which took place on 8 February. Serhan’s article attempted to dismiss the historic result as a “familiar tale” whereby “mainstream parties falter” so ‘populists fill the vacuum’. The result reflected ‘a rise in Irish nationalism and anti-English sentiment’. But she got it badly wrong, as did one person who shared her article:

So people immediately took to social media to put to bed any notion that this vote was nationalistic in the xenophobic sense:

This person clearly showed the Atlantic staff writer how little importance Irish people gave to immigration during the election: 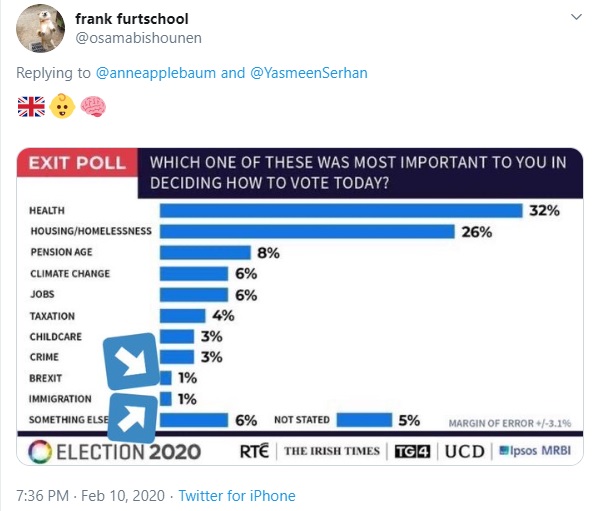 What the Irish election was about

So nothing could be further from the truth. And no analysis on the outcome of the Irish election could be wider of the mark than Serhan’s paltry assessment. The rise in support for Sinn Féin and the left bears no resemblance to the rise in nationalism in the UK, the US, or Brazil.

Irish people wanted action on the crises in homelessness, health, and housing that exist in a country experiencing economic growth. Because the mainstream parties certainly did “falter” on these: 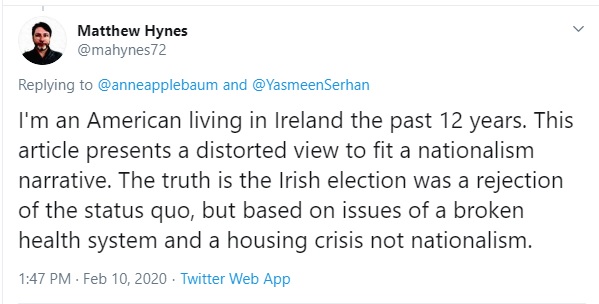 UK Labour Party deputy leadership candidate Richard Burgon also got involved. While looking at the Irish election from the UK, he was clear why there’d been a swing to Sinn Féin:

Ireland's election shows why those media commentators arguing for Labour to move to the centre are completely wrong.

Sinn Fein benefited from being a strong voice against austerity.

Ours was a Brexit election. The next one won't be. We must defend our socialist policies.

Other people who took to social media highlighted how Serhan misunderstood Irish ‘nationalism’:

Contrast this with the anti-immigration position of the Brexit campaign or Trump’s 2016 election campaign. Sinn Féin supports multiculturalism. In fact, the party’s justice spokesperson received death threats and had his car set on fire. This happened just days after he condemned the peddling of far-right ideology in Ireland.

In her article, Serhan used an opinion piece by one Irish journalist to show growing “anti-English sentiment” in Ireland. It was an unsubstantiated article full of hearsay and rambling anecdotes. So it had no relevance to the election result in Ireland.

What the election result means

It is true that the largest left-wing party in Ireland has a nationalist element to it. It supports a united Ireland. But it’s primarily a left-wing republican party whose stance on issues such as multiculturalism, a woman’s right to choose, and same sex marriage are at complete odds with the nationalist movements she has linked them to.

The swing to the left in Ireland was anti-austerity and pro-people – plain and simple. Let’s hope it’s one swing of many.