US street-based projects are talking about more than just police reforms. They want outright liberation - The Canary 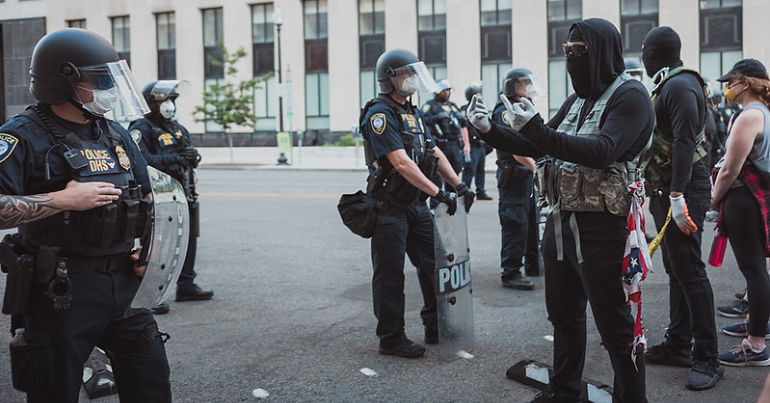 On the west coast of America, authorities have threatened to send in police to retake Seattle’s Capitol Hill Autonomous Zone (CHAZ). While on the east coast, the Black Lives Matter chair for Greater New York has called for armed “peace officers” to monitor police activity.

Meanwhile, all across the US, legislation is being introduced to reform policing in the wake of the killing of Black man George Floyd and the subsequent protests against police violence. More than 160 separate pieces of legislation have been raised in 19 states. These range from improving accountability, to bans on chokeholds and use of tear gas and rubber bullets. And in some states and cities police budgets have been slashed. Although in Kansas, a bill to prevent the hiring of police officers who have a history of misconduct allegations was rejected.

Locals in Seattle fed up with police violence closed down the district police station and declared Capitol Hill an ‘Autonomous Zone’. But Jenny Durkan, Seattle’s mayor, is now threatening to send in police to reopen the precinct station and retake the free zone.

However, Decriminalize Seattle, which represents a coalition of local groups, later released a statement rejecting the need for a police presence:

We know that in every neighborhood of our city, violence is a constant. We know that police do not stop violence. We know that violence happens even when the police are present. Less than a year ago, a Black woman was killed on the same block as last night’s shooting, with the East Precinct fully staffed with officers only 200 feet away. The presence of police did not stop that death…

Police don’t keep us safe, we keep us safe. Last night’s shooting should redirect us to the task at hand – to defend Black lives by dismantling the Seattle Police Department and investing in real community safety.

The threat to retake CHAZ followed a shooting in the vicinity of a park that saw one person dead and another wounded. Locals prevented police from entering the park to see to the victims unless the police dropped their weapons. One of the victims was transported by local volunteer medics to receive CPR. He and the second victim were taken by the CHAZ medics to Harborview Medical Center.

In a statement, Socialist Alternative councillor Kshama Sawant suggested the shooting was by the far-right:

there are indications that this may have been a right-wing attack. If so, this would not be the first such attack on the Capitol Hill Black Lives Matter protest. As many recall, an armed man drove into the protest action on June 8, and shot black activist Dan Gregory, who had heroically intervened to stop the driver.

However another report suggested that the dead man, Lorenzo Anderson, was targeted “because of a personal beef”.

On the other side of the US, Black Lives Matters chair for Greater New York called for the monitoring of police by armed “peace officers”. In an interview with DailyMailTV, Newsome explained that these peace officers would be armed, similar to the Black Panthers:

We pattern ourselves after the Black Panthers, after the Nation of Islam, we believe that we need an arm to defend ourselves. …

I don’t see us working with police. I see us policing ourselves. I see us teaching black people how to police their own communities.

We want liberation. We want the power to determine our own destiny. We want freedom from an oppressive government, and we want the immediate end of government sanctioned murder by the police.

And we prepare to stop these government sanctioned murders by any means necessary. We are preparing and training our people to defend our communities.

The Black Panthers Movement (BPM) was a US-wide mass organisation, prominent during the 1960s and 1970s. It received support from figures such as actor Marlon Brando, actor Jane Fonda, and musician John Lennon.

One of the Panthers’ demands was:

We believe we can end police brutality in our Black community by organizing Black self-defense groups that are dedicated to defending our Black community from racist police oppression and brutality. The Second Amendment to the Constitution of the United States gives a right to bear arms. We therefore believe that all Black people should arm themselves for self-defense.

The following video provides a good overview of the Black Panthers. It also shows how they were a prominent target of the FBI’s counter-intelligence programme (COINTELPRO), used to “track, harass, discredit, infiltrate, destroy, and destabilize dissident groups in the United States”.

Apparently, “233 of 295 domestic covert actions by the FBI aimed at black nationalist groups were directed against the Panthers”.

All across the US, police have reacted to the Black Lives Matter protests with even more brutality and extreme aggression. But that response led to the growth of CHAZ, as well as the proposal for Black Panther-style interventions by armed peace officers. In parallel, established anti-fascist defensive organisations, are working in support of Black struggles.

Fundamentally, these different initiatives don’t just challenge the need for the police and the state but explore how people can liberate themselves from both. A massive task.