In another sign that Biden is the true neocon candidate, his inner circle reads like a who's who of US imperialism - The Canary 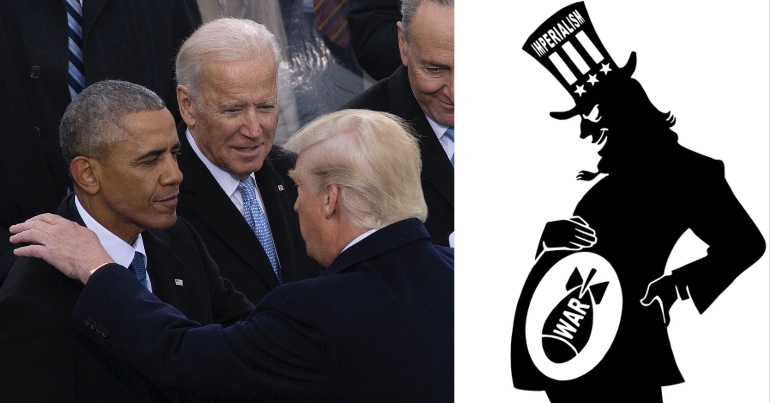 The Canary recently reported that major figures from a previous Republican Party administration are rallying behind presumptive Democratic Party presidential nominee Joe Biden. This provides clear evidence that Biden is the preferred choice of Washington’s neoconservative establishment. Moreover, it demonstrates that the US has two right-wing, imperialist major parties.

Now figures from the Democratic Party’s small progressive (or, perhaps more accurately, moderate) wing have issued a damning letter criticizing Biden’s choice of company. As the letter points out, his inner circle reads like a who’s who of US interventionism. And this provides even further confirmation that the US is now essentially a one-party state when it comes to foreign policy.

On 5 August, the Huffington Post reported that it had obtained a letter signed by several Democratic National Convention delegates. The letter describes Biden’s current group of advisors – and presumably, likely cabinet picks – as a “horror show” of people with long records of supporting “disastrous” US military interventions.

Most of the delegates are ‘pledged’ to Bernie Sanders, which means that Democratic Party members elected them during the party’s primary. According to US internal party politics, these delegates then vote for him at the party’s convention. But since Biden already won the majority of delegates, this process is largely a formality and he is all but certain to be the party’s candidate.

A motley crew of warhawks

We ask you not to rely on foreign policy advice from those who may have a conflict of interest as a result of their relationships and lobbying on behalf of merchants selling weapons and surveillance technology.

We ask you to appoint top foreign policy advisors whose records reflect good judgment and an understanding of the importance of diplomacy and international cooperation, particularly in the face of global climate catastrophe.

It singles out former US ambassador to the United Nations (UN) Susan Rice, former deputy secretary of state Antony Blinken, and former deputy director of the CIA Avril Haines. All three served during the Obama administration. And as The Canary has extensively reported, Obama’s foreign policy was (with one or two notable exceptions) largely a continuation of that of his predecessor George W Bush.

Rice played a key role in arguing in favor of US intervention in Libya as the Obama administration’s representative at the UN. Blinken was involved in crafting US policy in Afghanistan, where US troop numbers were increased, and in Pakistan, which also saw continued US meddling. Haines, meanwhile, was involved in executing Obama’s infamous drone assassination program, which was ten times worse than Bush’s, and also attempted to suppress information about the Bush administration’s use of torture.

As if any further evidence were needed, this shows beyond any doubt that the establishment wing of the Democratic Party, of which Biden is a part, is just as bad as the Republicans when it comes to foreign policy. Indeed, as The Canary previously reported, major figures from the George W Bush administration recently formed a ‘Super-PAC’ backing Biden for president. This is because Biden will be a more competent and reliable administrator of US empire than the erratic Trump administration.

This is not, of course, to say that Trump is any better than Biden. Though Trump has technically been the first president in a long time who has not started a new US war and, unlike his predecessors, did attempt to improve relations with Russia, his presidency has nonetheless been a veritable horror show in its own bizarre way. From an attempt at regime change in Venezuela to cozying up to the far-right Israeli government, and from pulling out of the Iran nuclear deal to tightening sanctions on Nicaragua and Cuba, Trump has proven that his campaign pledge to govern as an isolationist was a self-serving lie from the start.

Voting for either of these imperialist parties serves only to lend credibility to this status quo of endless war and, in turn, makes one complicit in its heinous catalogue of crimes. Clearly, for anyone who opposes this status quo the only option is to either vote for a third party or else not vote at all.