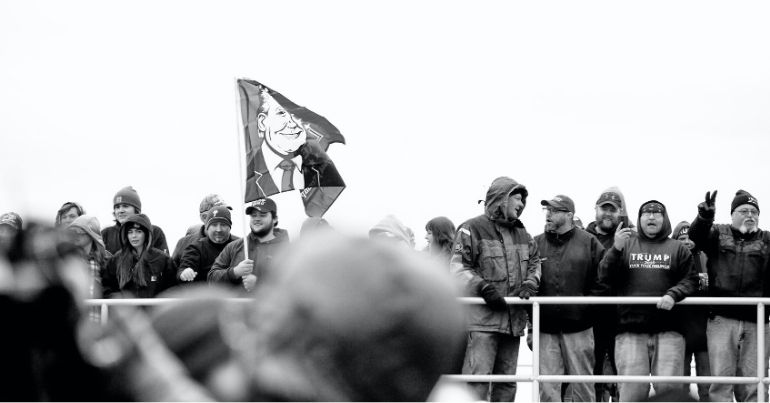 At a right-wing ‘Save America’ rally on 6 January, Trump repeated unsubstantiated claims of voter fraud. And he urged his supporters to continue the fight against the US election results. He told marchers:

Following this speech, on the same day, a right-wing mob violently stormed the US Capitol building in Washington, D.C. Five people were killed in the insurrection, including one police officer.

Several White House officials have resigned following the violence. Moreover, Twitter has permanently suspended Trump’s account “due to the risk of further incitement of violence”.

Bringing white supremacy to the fore

According to the New York Times, images from the insurrection “suggested ties to far-right movements”. Outlets have identified insurgents, such as a QAnon influencer who goes by the name of “Q Shaman”, and Matthew Heimbach, a well-known white nationalist. Other insurgents proudly displayed their white supremacist ties, evidenced by one militia’s shirt emblazoned with “Camp Auschwitz”.

This is what the president has caused today, this insurrection.

Indeed, over the course of the 2020 election period, Trump has made a concerted effort to whip his supporters into a frenzy. But the Capitol coup has been a long time in the making.

I could stand in the middle of Fifth Avenue and shoot somebody and I wouldn’t lose any voters.

Having deflected blame for the violence that took place in Charlottesville away from the far-right, saying there was “blame on both sides”, Trump responded to 2020 Black Lives Matter protests by posting a racist tweet, saying:

This stands in stark contrast to his response to white supremacist domestic terrorists. In fact, ABC News has linked 54 acts of violence to Trump’s divisive rhetoric.

Beyond Trump, the Capitol coup stands firmly in America’s history of white supremacists fiercely fighting against progress. From the Wounded Knee Massacre, through Selma’s ‘Bloody Sunday’ to Charlottesville, white supremacy has always played a central role in American history. The president has just given this predilection a voice, a platform, and credence. America is now a nation where far-right white supremacists feel emboldened to storm the Capitol and bring Congress to a standstill.

The relatively mild police response to armed white terrorists speaks volumes, especially when compared with the brutality peaceful Black Lives Matter protesters were met with this year. A video emerged of Capitol police standing idly by as rioters flocked into the building. Another clip shows officers who appears to be letting rioters past the barricades. This disparity in police responses is a clear indicator that racism in America goes beyond Trump. New York congressman Jamaal Bowman is calling for a commission to investigate Capitol police and whether any of its members have ties to white nationalist groups.

This unprecedented event demonstrates that white supremacy is a legitimate threat to democracy. It’s imperative that the US government and judiciary hold the president to account. But sadly, the ideologies that Trump has brought to the fore will not retire when he leaves office. His powerful allies and fervent supporters will remain at large. America can’t put the genie back in the bottle.