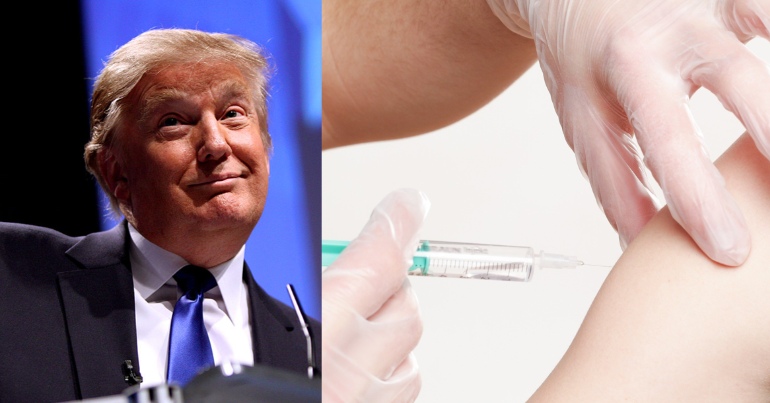 The one-year anniversary of the outbreak of coronavirus (Covid-19) passed last December. But following the approval of multiple vaccinations from several different pharmaceutical companies, the end seemed within sight. Just as a return to normality begins to look possible, though, this notion seems increasingly threatened by the rise of a familiar foe of science, progress, and public health. The long-simmering anti-vaccination movement is going into overdrive in its attempts to portray mass vaccination as some kind of evil conspiracy.

The Trump administration established a prolific record of opposing science and promoting all manner of conspiracy theories. But it has perhaps exceeded even its own standards, with one last dismal act of support of anti-vaxxer hysteria.

On 18 January, the Washington Post reported that the US federal government granted several anti-vaccine groups bailout money from public coffers. This was in the waning days of the disgraced Trump administration. Five of the most prominent organizations belonging to the anti-vaxxer movement received more than $850k in loans from the Paycheck Protection Program (PPP). The PPP was formed to help small businesses and non-profit organizations struggling under the crippling financial fallout of the coronavirus pandemic.

The process has been controversial due to applicants’ ability to self-certify the loans’ approval. The Post also reported that corporate restaurant giants such as Shake Shack, and a defense contractor with billions in sales, “benefitted handsomely” from the loans. Meanwhile “debt collectors and high-interest lenders pocketed more than $500 million”.

A who’s who of the ‘anti-vaxxer’ movement

The five anti-vaccine groups that received PPP money are:

The Children’s Health Defense is perhaps the most high profile and notorious of these groups. And it was founded by a member of the US’s prominent Kennedy political dynasty, Robert F. Kennedy Jr. On 17 January, Kennedy wrote an article in which he claims that health officials are “depriving people of the information they need to make informed decisions [about coronavirus vaccinations]”.

The proof is in the outbreaks

Reluctance to vaccinate children, amongst a small but growing section of the US public, has led to localized outbreaks. These outbreaks are of diseases that were thought to have been consigned to the history books decades earlier. In January 2019, USA Today reported that a county in Washington state, known as an anti-vaxxer hotspot, had experienced over 70 cases of measles so far that year.

The county has one of the lowest vaccination rates in the state: Nearly one in four Clark County kindergarten students during the 2017-18 school year did not get all their immunizations, according to data from the Washington Department of Health. At three schools in the county, more than 40 percent of kindergartners did not receive all recommended shots before starting school.

Meanwhile, in December 2019, the World Health Organization reported that “vaccination rates globally have stagnated for almost a decade”. And as a result of these suboptimal vaccine rates, “more than 140,000 people died [worldwide] from measles in 2018″. This was while “measles cases surged globally, amidst devastating outbreaks in all regions”.

A familiar face of conspiracism

Trump himself has been a long-time exponent of anti-vaccination myths. He’s also voiced conspiracy theories about the pandemic, especially during the crucial early months of the outbreak. Trump’s handling of the crisis is widely viewed as one of the major reasons behind his 2020 election loss to Democratic Party challenger Joe Biden. The US, despite being the wealthiest and most powerful country in the world, holds the dubious distinction of having the most coronavirus cases and the most coronavirus related deaths in the world.

Though Trump is gone, the damage caused by these dangerous peddlers of pseudo-science will continue beyond his presidency. And the Biden administration will likely take a less oppositional stance toward science and reason-based public health measures than Trump. But the threat that these groups pose to containing the coronavirus outbreak – and that of other deadly diseases – will remain.