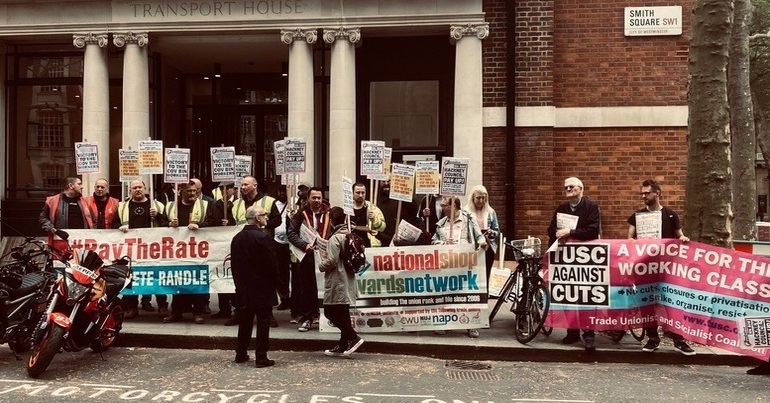 The above comment comes from The Canary‘s interview with Pete Randle, the suspended union representative for bin drivers in Coventry. His comments tell the story of the ongoing Coventry bin drivers dispute from the drivers’ point of view. The dispute started on the 31 January 2022, and took six months to resolve. Randle stated that the handling of the dispute by a majority Labour council was all about union-busting. In fact, it was not about any money-saving exercise as corporate media would have us believe.

Coventry city council has so far dominated media coverage on the ongoing bin drivers’ dispute. Corporate media has done their level best to feed the public a great deal of propaganda. In doing so, it has omitted the truth. Coventry council has hired Tom White Waste contract drivers to get around the impact of the strike.

Unite has staunchly defended the drivers, and fought to resolve this dispute – as they confirmed for The Canary:

Coventry HGV refuse drivers have been on an all-out strike since 31 January 2022 in a dispute over low pay. Unite’s support for the striking refuse workers in Coventry is 100 per cent solid including the union’s unwavering support for its rep Pete Randle who has been suspended by the council on bogus charges.

Unite explained to The Canary why the strike was so important:

The striking workers in Coventry earn a basic rate of just £22,183. 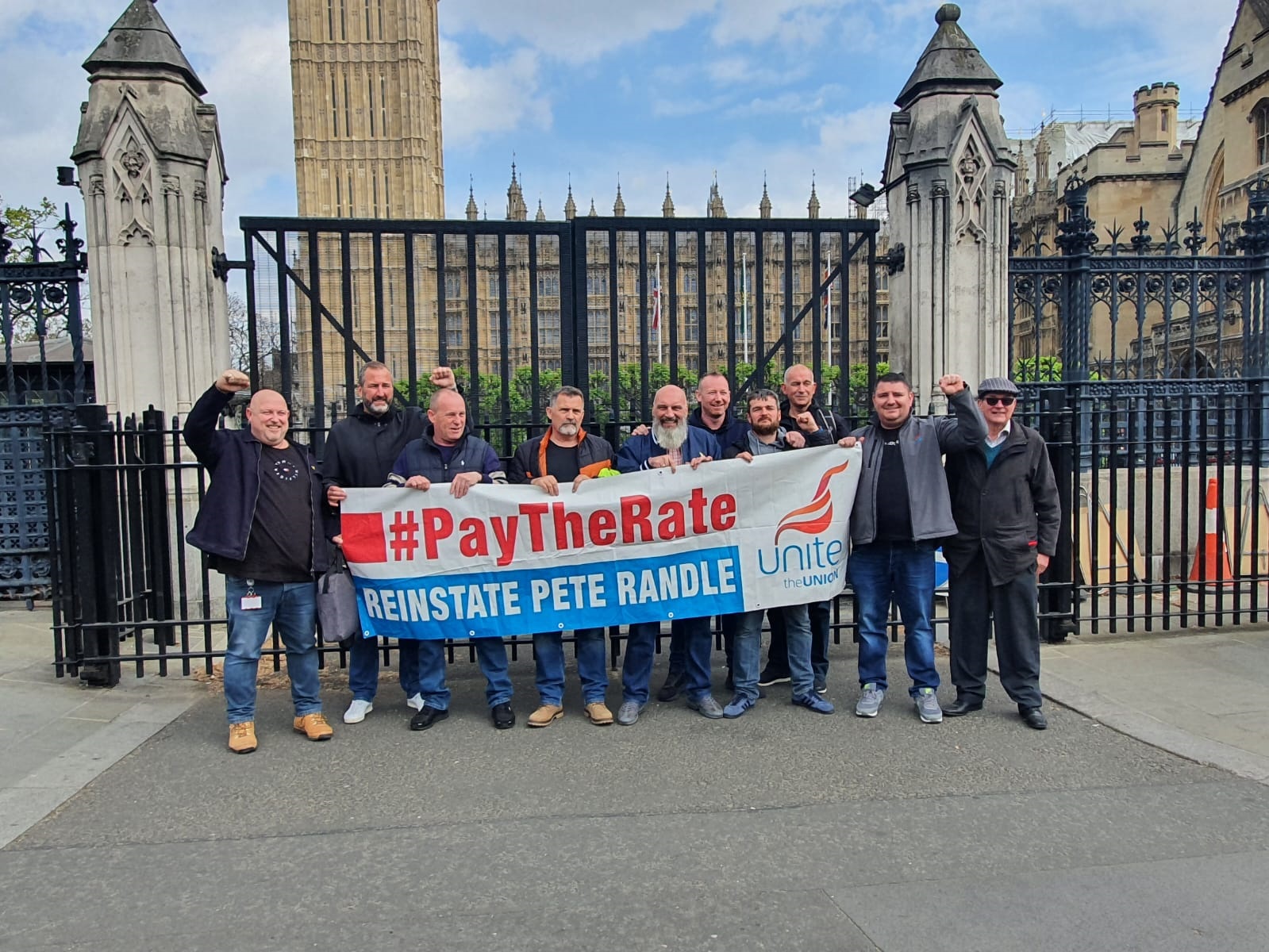 Unite also stated that Coventry council had been dragging their feet:

There’s not an obstacle that prevents the council from paying the workers the rate for the job. The council has taken the decision to ignore its workers, to ignore the people of Coventry, and to spend millions trying to break the strike.

Coventry council has so far not commented on any of the claims highlighted by The Canary.

A strike breaking workforce has been brought in, earning £18-£26 an hour.

Tom White Waste were actually paid more than the striking workforce, according to Randle:

The heroic bin workers were successful in getting a pay rise. Reflecting on the resolution, Randle said:

The deal gives us the financial equivalent of what we asked for, which was the Grade 6. We don’t mind what it’s called – the point is we achieved the extra pay. Specifically, we have been given extra pay in recognition of something we do already – which is work Saturdays.

Often, striking workers are cast as somehow greedy – but if the likes of union-busting Tom White Waste can be paid higher, why shouldn’t the regular workers?

Further evidence of the union-busting agenda is that Tom White Waste, which employs the scab drivers, does not take on union members. However, it would seem that this private company treats its employees better, as confirmed by Unite who said:

It has just emerged those refuse vehicle drivers employed by Tom White Ltd, a subsidiary of Coventry council that is being used to try to break the bin strike, have been given a 12 per cent pay increase.

It really is not unreasonable for council bin drivers to expect the same. Coventry Telegraph‘s recent poll shows that public opinion and support has been on the side of the drivers. Randle makes a point of highlighting the fact that:

We didn’t want to take industrial action, but we weren’t afraid to take it either. It was always a last resort to take the action.

Coventry council had created a scenario where they were forcing further privatisation of key services onto their residents. As the above support shows, many residents saw the bigger picture. Because this really isn’t just about bins being emptied. Nor is it merely about just one lot of workers demanding more pay. These disputes are going on all over the UK, and they are indicative of a changing political climate.

It is about solidarity between working-class people. Randle went on to confirm that bin drivers in Trafford, Manchester had managed to win their dispute and achieved a higher rate of pay. This had ultimately spurred Coventry bin drivers on and made them more determined to fight for what they knew they deserved.

The Canary contacted Tom White Waste for comment, and they did not respond. 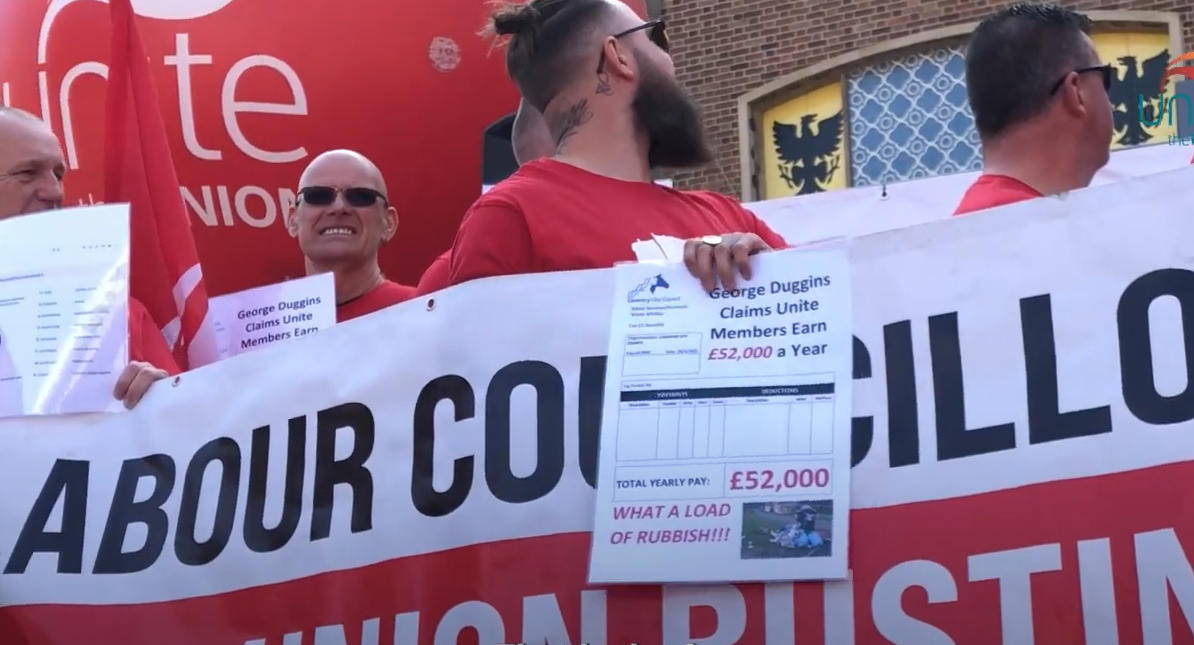 Workers’ rights are under attack

It is clear that this strike has split public opinion, between those who are anti-union (your typical Tory voters), the Labour councillors who are also anti-union, and those who still align with Labour’s core traditional values.

Disputes such as this highlight a split in a party that once represented working-class people. Randle goes on to explain that many party members have torn up their Labour membership cards in disgust:

A number of us have chucked our membership cards on the brazier.

The status quo is unlikely to change any time soon – not even under a Keir Starmer-led Labour Party. This is clearly an attack on workers’ rights. Union-busting is the agenda of those who try to keep the working classes on the back foot.

Unite’s Sharon Graham wraps it all up in a nutshell on Unite’s website, by saying:

While corporations make billions and ordinary working people suffer, this government chooses to attack the rights of British workers.

Graham also sends out a clear message to Keir Starmer and the Labour Party, when she adds this final thought:

I don’t want hard-to-believe promises for the future; we need concrete action now. This is an attack on working people and on the whole of the labour movement. It’s time for the political wing that was founded by and continues to be funded by our members to step up to the plate.

This dispute is indicative of the experiences felt by workers all over the UK. Solidarity with strike workers has to be a core part of the labour movement. The success of the Coventry bin workers strike should spur us all on to stand together with one another to get fair pay and good working conditions for everybody.