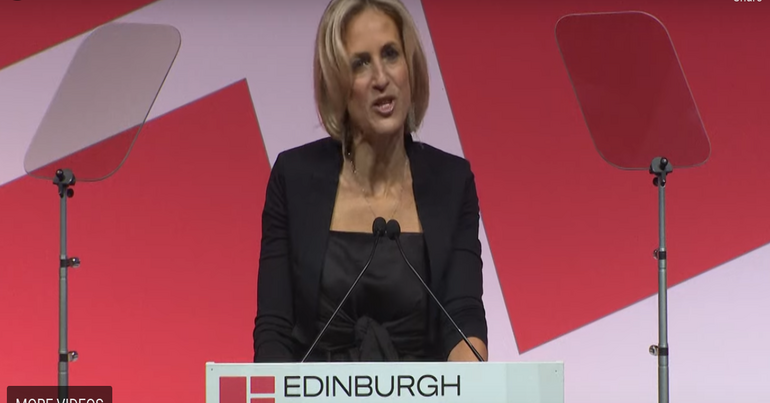 During a speech at an Edinburgh event, former BBC journalist Emily Maitlis accused her old employer of bias. She also referred to a BBC board member as the Conservative Party’s “active agent”. That board member was subsequently named in the media as Robbie Gibb.

None of this is new, though: The Canary and other media have been publishing similar accusations about Gibb’s role at the BBC – and much more – for some years.

Maitlis’ speech, which starts 10 minutes in, is here in full:

A complete transcript is here.

In an extract from her speech Maitlis referred to the BBC board:

where another active agent of the Conservative Party – a former Downing Street spin doctor and former advisor to BBC rival GB News – now sits acting as the arbiter of BBC impartiality.

Journalist Emily Maitlis has hit out at the BBC – her former employer – claiming its board has been infiltrated by a Conservative Party agent and former Downing Street spin doctor whom she claims is now an 'arbiter of BBC impartiality'.

Who is the “active agent”?

So who is this “active agent”?

Gibb is the brother of Tory MP Nick Gibb, who held the post of schools minister.

Robbie Gibb worked for the BBC for some 25 years. During that time he headed BBC Westminster; was editor of The Daily Politics and This Week, and was deputy editor of Newsnight.

In July 2017, after leaving the BBC, Gibb was appointed director of communications to then prime minister Theresa May. In 2019, May gave Gibb a knighthood.

Gibb’s media career was not confined to the BBC, for in August 2020 he went on to found the rightwing GB News, for whom he was an editorial adviser.

In April 2021, the BBC announced that Gibb had been appointed to its board. It mentioned, too, another senior appointment:

Richard Sharp replaced Sir David Clementi as the BBC’s chairman. Sharp, a former banker, investor and philanthropist, is close to Rishi Sunak, the Chancellor, who he worked with during the pandemic. Sunak previously worked with Sharp at Goldman Sachs.

One tweeter has called for a ban on anyone with a political background running the BBC:

Well said. I don't personally have any animosity towards journalists on the front line. It's management & editorial where there *is* a problem. There should be a ban on anyone with a political history running the BBC. No party donors, former party candidates & no No.10 advisers. pic.twitter.com/S4KJzTbHX4

Maitlis also referred to BBC bias and The Canary has covered this via numerous articles.

One example we covered was about how Gibb allegedly failed to run a story about Arron Banks’ Leave.EU and its ‘courting’ of the far-right while at the BBC:

https://t.co/pbNTdJCphb actively courted far right fascists during the referendum campaign. The BBC and Robbie Gibb have serious questions to answer over their failure to run this story in 2016. The truth is ugly but it must be exposed. https://t.co/MvdwYfo6MG

The story was aired as part of a Channel 4 News investigation. That investigation claimed to have seen leaked emails revealing how Banks “repeatedly lied to cover-up his Brexit campaign’s effort to attract far-right extremists”.

The Canary reported how extremists were alleged to have included supporters of known far-right groups, including “the National Front, the BNP, Britain First and the EDL”.

And, according to Channel 4 News:

Banks emailed another Leave.EU director, saying: “I don’t think they will Run it after all that lot . You will have a busy week next week since Robbie will react by giving us massive exposure.

The Canary revealed another example of Brexit bias. This was when it was shown that the BBC was guilty of ‘using bias by omission’ by editing a headline to downplay the part Brexit played in the bin lorry drivers shortage.

In her speech Maitlis was quite candid about how the BBC feared going against the Conservative government’s Brexit stance, saying that:

in case they get labelled pessimistic, anti-populist, or worse still, as above: unpatriotic.

The Canary also noted that Gibb was in charge of the corporation’s live political shows during the EU referendum. We reported, too, how Tory MP Nick Boles accused Gibb of being one of the key people urging May not to compromise on Brexit.

Then there was the accusation of antisemitism levelled at Jeremy Corbyn.

In April 2020, The Canary’s Ed Sykes reported on a consortium of individuals that purchased the anti-Corbyn and right-leaning Jewish Chronicle. The consortium included:

The infamous Panorama episode, referred to above, alleged antisemitism by Corbyn. However, The Canary revealed that out of the 10 people who came forward to provide ‘evidence’ against Corbyn, eight had leading roles in an anti-Corbyn organisation. It should be noted that the Jewish Chronicle has been successfully sued in recent years, on multiple times, for slandering socialists.

More details were provided via this tweet by The Canary’s James Wright:

Almost all the Panorama ‘whistleblowers’ have leading roles in the anti-Corbyn Jewish Labour Movement:#PanoramaPapers pic.twitter.com/QwtDIWSGnx

As for Gibb’s views on Corbyn, it’s no surprise he said that the Labour leader “opened the door to toxic extremism” for Labour.

It’s not just all about Gibb, but the systemic problem of bias at the BBC.

Prior to the 2019 General Election The Canary‘s Emily Apple reported more examples of BBC bias:

In another case The Canary revealed how the BBC ran with the government’s entirely false assertion that it had met its target of 100,000 Coronavirus (Covid-19) tests a day.

Maitlis should be applauded for her speech, though she herself is not without guilt.

One tweeter points out that Maitlis’ denouncement of BBC bias is from her new position in a “lucrative” new job:

Maitlis's credibility now as 'whistle blower' is more than a bit damaged by this.

It has taken her this long time (and a lucrative new job) to admit what we all knew was indefensible – but she was happy to see defended by the BBC.

And another tweeter reminds us of the time she warned of putting Corbyn into power:

I’m really finding this Maitlis adoration quite pathetic. Remember this ? “You're going to fail the country on this one possibly & put Jeremy Corbyn in power”

While the BBC produces excellent drama and the occasional documentary, the idea that it’s impartial in its news coverage is a myth. Moreover, Gibb’s role in this bias has been known for years – Maitlis merely confirmed that the accusations are true.