TUC regurgitates a Corbyn policy from four years ago 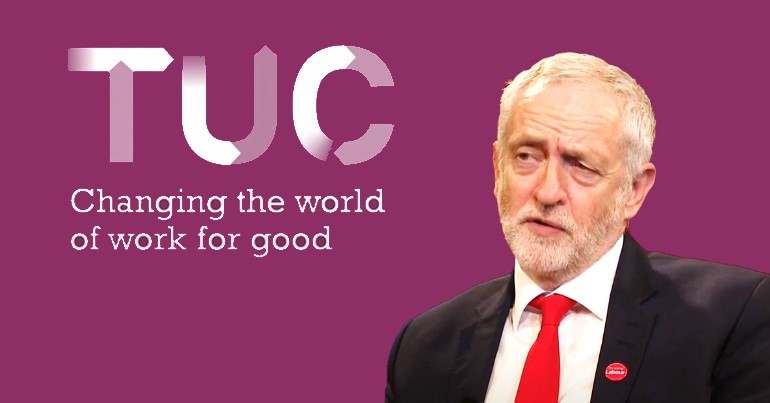 The Trades Union Congress (TUC) has once again shown that it is little more than a cog in the wheel of capitalism. After its tepid £15-an-hour minimum wage plan, it’s now resurrected a Jeremy Corbyn policy from four years ago.

As The Canary previously reported, the TUC announced on 24 August that it was calling on the government to put in place a £15 minimum wage by 2030. It also wanted this to be based on 75% of median earnings. But some people weren’t happy, saying the TUC should call for a general strike instead. Moreover, they thought it was too little, too late, given the current cost of living catastrophe.

However, it seems like the TUC missed the fact that its plans were underwhelming. It’s now made another announcement of a new policy. Except it’s not new, but copied directly from a policy announced by Corbyn’s Labour Party in 2018.

On Monday 29 August, the TUC said it was calling for four more bank holidays a year. It said in a press release that it was:

calling on government to recognise the low number of holidays UK workers get compared to other nations, and to show gratitude for grafters by levelling up our holidays with neighbouring workers in the EU.

England and Wales usually get 8 annual bank holidays, while Scotland and Northern Ireland typically get either 9 or 10 depending on the timing of New Year and their patron saint days.

However, this year the whole of the UK got an additional holiday for the Queen’s Platinum Jubilee.

The EU average is 12.3 days, which is over 4 days more than UK workers get in a typical year.

Of course, Corbyn’s Labour was doing this four years ago. He said in 2018 that:

Eight years of Tory austerity, which Labour will bring to an end, have had a disastrous effect on our vital public services and workers have paid a heavy price in the cost of living and their working lives. We will give our workers four extra days’ paid holiday.

Crucially, when Corbyn was calling for more bank holidays, the UK wasn’t in such an inflation and energy price crisis. Plus, it was in conjunction with other policies which would have helped families – such as free broadband and a 5% pay rise for public sector workers. The TUC calling for £15-an-hour minimum wage in 2030 and four bank holidays is not a coherent plan. It’s the ramblings of an organisation attempting to seem radical while just regurgitating democratic socialist policies from years ago. This is simply not good enough.