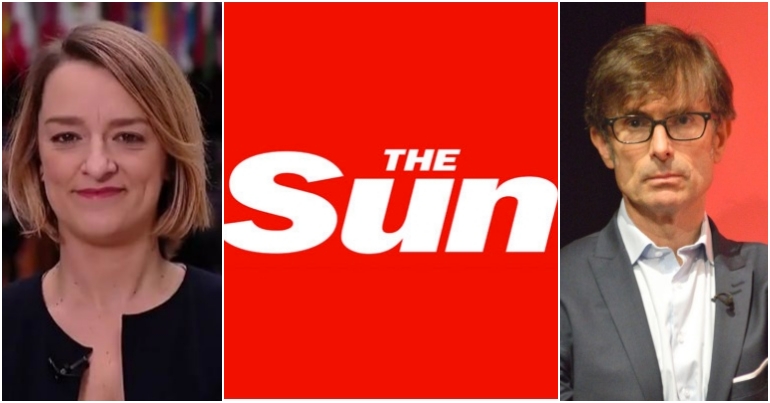 The sorry state of the establishment media was on full display on 9 December 2019. Following a bruising day for Boris Johnson, when he was shown the reality of NHS cuts and responded by pocketing a journalist’s phone, they decided to repeat a gross Tory lie without verification.

Health secretary Matt Hancock was accosted by angry voters who challenged him about the state of the NHS and the sick child who was forced to sleep on the floor. Following the incident, his team briefed journalists that one of his aides had been punched. This was a lie. But that didn’t stop the BBC‘s Laura Kuenssberg, ITV‘s Robert Peston, and Paul Brand and the Sun‘s Tom Newton Dunn promoting the lie to millions of followers: 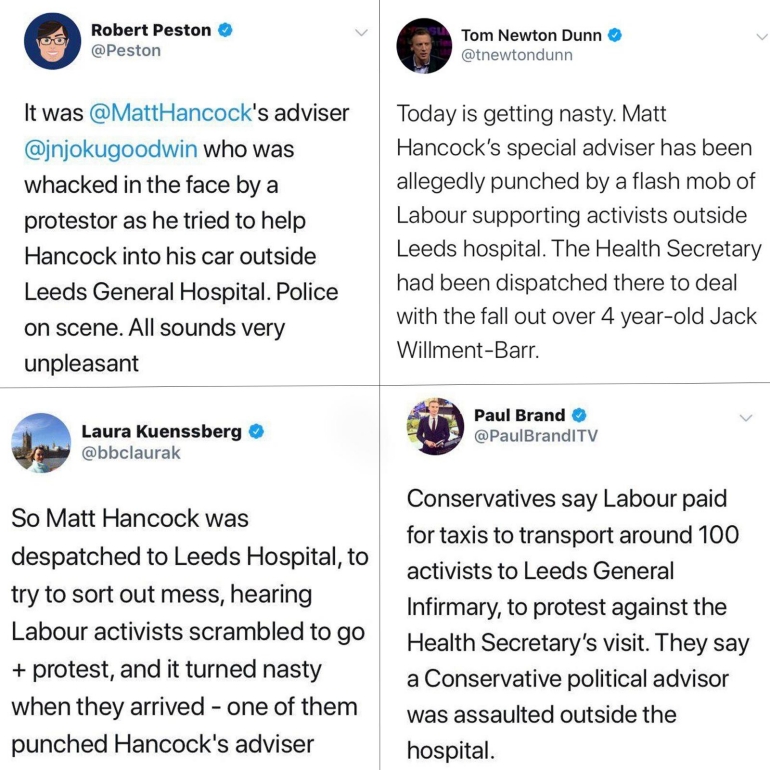 Invented by the Tories to divert your attention from a child having to lie on a hospital floor; reported by media that didn’t bother to check if it was true.

Peston, at least, issued a full apology for his tweet:

It is completely clear from video footage that @MattHancock's adviser was not whacked by a protestor, as I was told by senior Tories, but that he inadvertently walked into a protestor's hand. I apologise for getting this wrong.

Kuenssberg began by saying Labour said it was a lie:

Labour says Tories have 'resorted to bare faced lying' over the punch, that turned out not to be a punch after all in the footage from the hospital

Brand meanwhile, appears not to have apologised, but does seem to have deleted his tweet.

Newton Dunn, however, failed to either apologise or delete his tweet. In fact, he almost doubled down:

Video footage suggests that the fracas involving Hancock’s adviser was not an intentional punch, but a misplaced arm. Tories also now saying it might have been an accident – but the adviser felt at the time it wasn’t. The most acrimonious day of the campaign by far.

This, perhaps, shouldn’t be surprising. Newton Dunn, after all, didn’t apologise after writing a story based on neo-Nazi and antisemitic sources that the Sun was forced to remove from its site.

It’s all a bit grim

But one tweet from Kuenssberg that she didn’t delete really sums up how out of touch the establishment media are with the rest of us:

Have video from Hancock leaving Leeds General just come through so you can see for yourself – doesn’t look like punch thrown, rather, one of Tory team walks into protestor’s arm, pretty grim encounter pic.twitter.com/hD1KwA72gG

No, Kuenssberg, this was not a “pretty grim encounter”. This was local people who are furious about what Hancock and his Tory friends are doing to our NHS. What’s grim is a health service that’s suffered so many cuts that a child with suspected pneumonia was forced to sleep on the floor. What’s grim is a political elite that made a choice to deliberately push people into poverty while bailing out the bankers.

And what’s grim is the fact that rich establishment journalists appear to have no idea about the violence this system inflicts day in, day out on the rest of us. Describing people shouting at the health secretary as “pretty grim” shows a total disconnect about the abuse the Conservative Party has inflicted on every aspect of our lives. People like Kuenssberg don’t see this abuse because they don’t have to live it. It’s not their reality. And it’s not the reality of the people who live in their bubbles. Hancock was not abused. He was challenged and told he wasn’t welcome. Because he’s not. That’s not grim. That’s what so many of us would love to do if we were given the chance.

And perhaps even grimmer for this election is the state of our media. Establishment journalists have repeatedly and uncritically promoted Tory lies. This is not good enough. It’s not good enough to say you’re reporting on what’s said when you know it’s a lie. A million fact-checkers can never compensate for the value the original lying headline provides the Tories. Because more people read that headline than the fact-checkers.

This has been a nasty, dirty election; an election full of lies, backed up and propagated by a mainstream media happy to believe and promote those lies. We deserve so much better from both our media and our politicians.