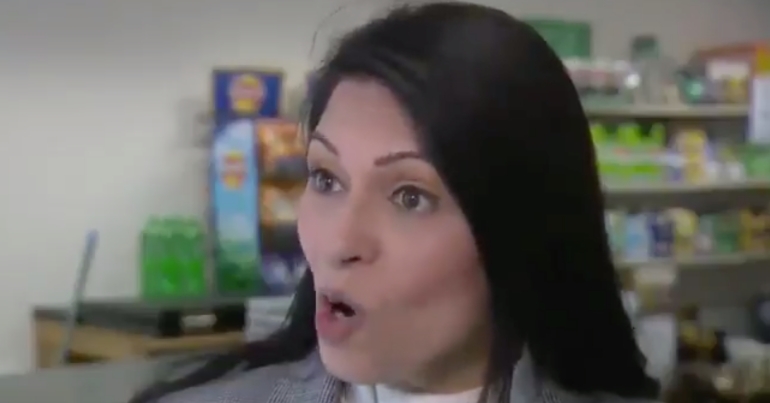 Home secretary Priti Patel has been in Barrow trying to woo voters to the Conservative Party. Barrow is a marginal seat which Labour hold with a majority of just 209.

But Patel’s comments should be enough not only to persuade the people of Barrow to vote Labour, but also everyone across the country. Because Patel doesn’t appear to believe that poverty is the government’s fault. Labour MP Laura Pidcock summed it up as “the most ridiculous thing I’ve heard from a Tory politician”:

Possibly the most ridiculous thing I’ve heard from a Tory politician. @patel4witham says poverty is not the fault of the Government. Seriously? 😳 pic.twitter.com/krNCvKoqHw

“Well, it’s not the government”

Patel was questioned on the levels of poverty in Barrow and the fact that “four out of 10 children in parts of Barrow are born into poverty”. But Patel refused to admit that nearly ten years of Conservative-led governments might just have something to do with this. Instead, she stated:

It’s not the government though, is it? Everybody just says it’s the government as if it’s this sort of bland blob that, you know, you can just go and blame.

The interviewer then challenged her directly as to whether the government is responsible. Patel replied:

Actually, well, it’s not. Because it’s all parts of society and the structures.

Patel then listed those who had a “role to play” in such poverty, including local authorities, education and public services. She said these were “locally led and locally run”. But it seems to have slipped her mind that most problems with these services are down to the vicious cuts Conservative-led governments have imposed on them.

Patel was very quick to blame local authorities in Barrow. But this local authority has had its funding slashed by the government and has to make budget cuts of £2.7m by April 2020. Mayor of Barrow Kevin Hamilton stated:

I didn’t enter politics to make cuts, I entered politics to help people but this is what Government cuts look like and where the savings have to be made.

And this follows on from cuts of £5m a year that the council were forced to make in 2011. Chief executive Tom Campbell commented at the time:

In the past the government has recognised that Barrow is a particularly poor area and we’ve been able to use the subsidy that we get from the government to keep our prices low.

Now that subsidy is disappearing, the council doesn’t really have any choice. It either has to charge an appropriate price or shut the facilities down.

So yes, Patel. Obviously the local authority is to blame for Conservative governments slashing millions from its budget – especially given the funding the government used to provide due to the levels of poverty in Barrow. Oh, that’s right, it is to blame.

Maybe Patel just missed the memo about the problems the Conservative government has caused.  After all, it’s not like any important bodies such as the UN have said anything much about poverty in the UK, have they?

So for Patel’s benefit, according to to the UN, the Conservatives have ‘deliberately’ pushed thousands of people into poverty:

Meanwhile, name any public service, and it’s suffered from vicious cuts. From schools to hospitals; youth services to domestic abuse refuges – everything has been decimated as the Conservative Party races to make the UK a playground for the rich. And the Institute for Public Policy Research found that austerity is to blame for 130,000 ‘preventable’ UK deaths since 2012.

Pidcock is right. Patel’s statement is “ridiculous”. It clearly doesn’t stand up to the evidence. And anyone who’s lived through the last ten years of Conservative-led rule can see straight through her. So make sure everyone sees this video. Because it should persuade everyone you know to vote Labour.