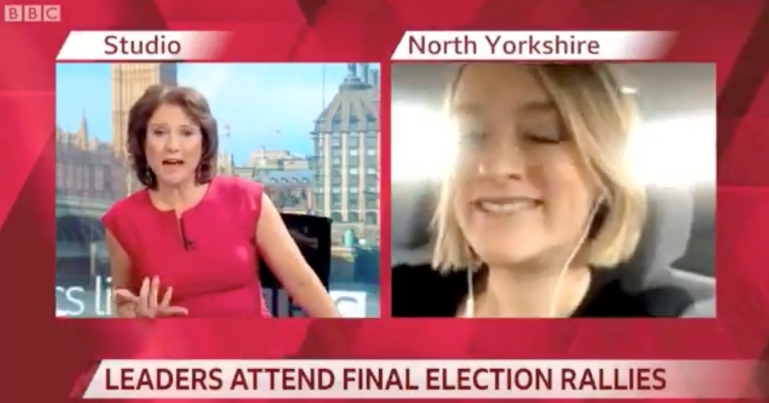 With just hours to go before polling stations open, the BBC‘s political editor Laura Kuenssberg made an extraordinary and extremely dodgy claim on live TV. In fact, what Kuenssberg said is so dodgy that some people are saying the BBC might have broken electoral law.

The postal votes… have already arrived. The parties, they’re not meant to look at it, but they do… get a hint.

She then revealed information from her sources about the contents of those votes.

Let’s pause a moment. Kuenssberg says she’s got information that parties are ‘not supposed to look at’. But it’s a little more than that. In fact, there are times when it could be a criminal offence, and:

Any person found guilty of breaching the secrecy requirements can face a fine or imprisonment.

The Electoral Commission confirmed to The Canary that:

Furthermore, as the Electoral Commission tweeted:

It may be an offence to communicate any information obtained at postal vote opening sessions, including about votes cast, before a poll has closed. Anyone with information to suggest this has happened should report it immediately to the police.

It is for this reason that The Canary is not reporting Kuenssberg’s exact words.

At this time, it’s impossible to say for sure if anyone is guilty of breaching election law. But it is safe to say there is something very wrong happening here.

Firstly, the Electoral Commission is clear. No-one should see or attempt to see the postal ballots at this stage. This process is about verifying that the votes are genuine, not counting votes.

It then follows that Kuenssberg’s sources might have broken the law in telling her what they’d seen during the session – even if they had accidentally seen votes. Whether or not Kuenssberg and the BBC broke the law in reporting this information is unclear. But at the very least, the BBC has a case to answer over the matter.

Thirdly, it’s just two days since Kuenssberg had to apologise after repeating false information from a source that a Tory aide had been punched. By now, she should know not to spread gossip and rumours from dodgy sources.

And finally, and perhaps most importantly, Kuenssberg is the BBC‘s political editor. She should know better. And we certainly deserve better.

A BBC Spokesperson said: “The BBC does not believe it, or its political editor, has breached electoral law”