Here's what the Tories did with nine years in power - Canary 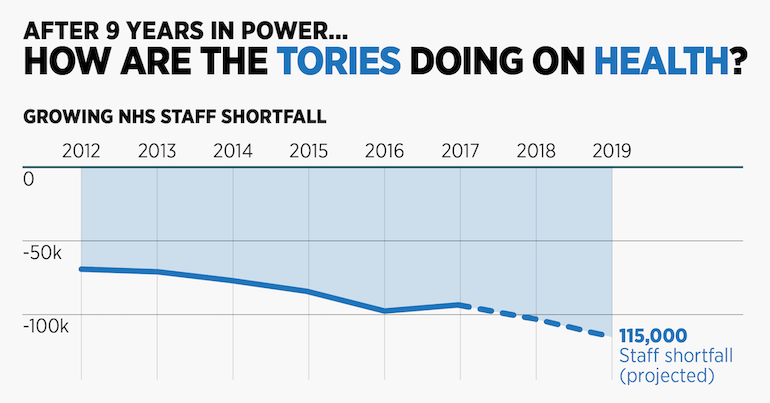 Tomorrow we vote for a new government. Here are some achingly simple, yet vitally important guides to help everyone before casting their vote. Because they show with brutal simplicity what the Tories have done over nine years.

The Conservatives on health

Ahmad Barclay ‘spent a day making charts to remind people of the Conservatives’ awful record in government since 2010′. The results speak for themselves. 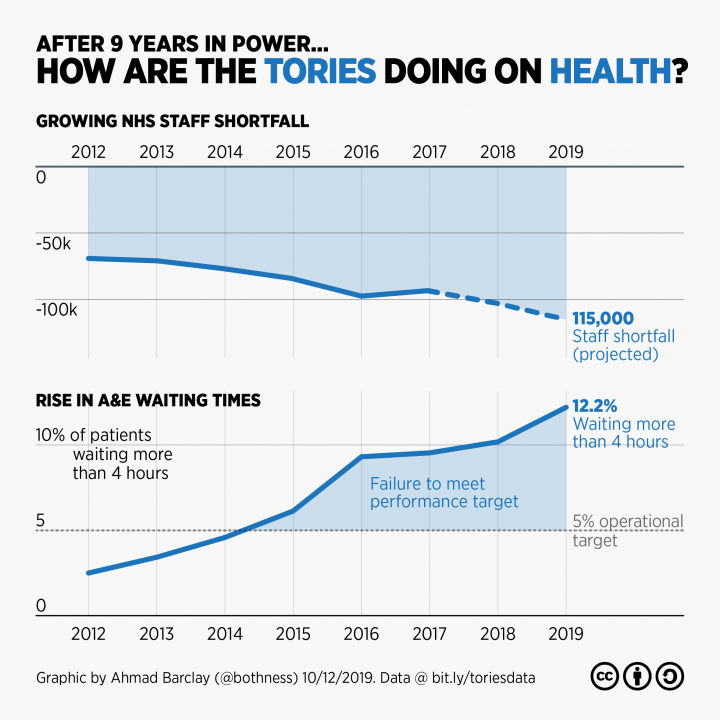 During this election, staff shortages, lack of beds, and A&E waiting times were encapsulated in one image of a four-year-old boy sleeping on a hospital floor. Boris Johnson’s response, and the subsequent efforts by the establishment media to rubbish the story, says it all.

As Barclay explained, “the health service has a staffing shortfall of over 100,000 (including over 30,000 nurses)”. Meanwhile, the Care Quality Commission’s (CQC) most recent report established that A&E waiting times are rising across the UK. The report stated:

July 2019 saw the highest proportion of emergency patients spending more than four hours in A&E than any previous July for at least the last five years. What used to be a winter problem is now happening in summer as well.

Time after time, Tory MPs boast about “record high” employment. They also brag that: “we’ve taken the unemployment rate down to its lowest since 1974”. 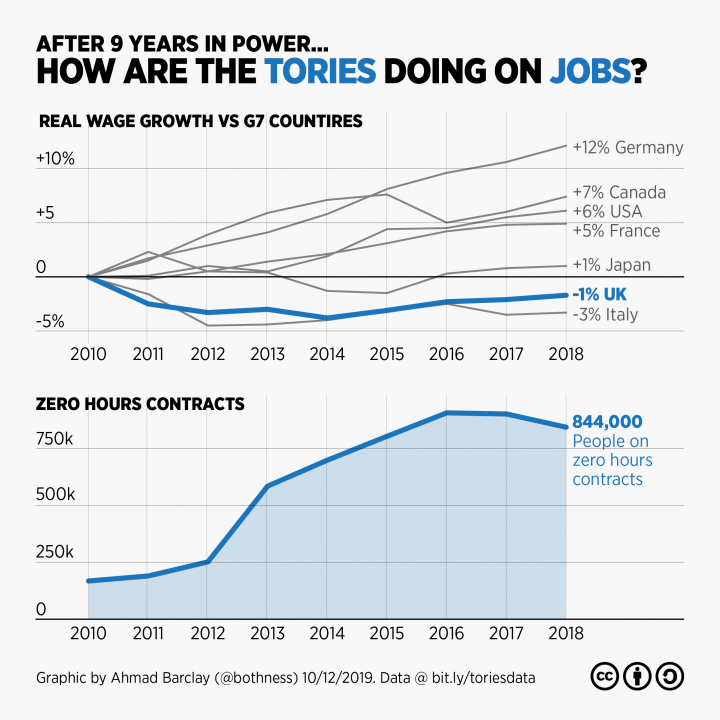 Since taking office, the Conservatives have relentlessly pushed forward their Universal Credit policy to allegedly ‘make work pay’. In 2015, Iain Duncan Smith, one of the benefit’s key architects as DWP secretary, claimed that it “guarantees you will always be better off in work than on benefits”.

But as the past nine years have shown, under Universal Credit, work doesn’t necessarily pay. Universal Credit has forced some people to use food banks and made others homeless.

As Full Fact reported, around 14.3 million people in the UK now live in poverty. Of these:

Barclay’s graph on cuts to police numbers against rising violent crime speaks for itself. 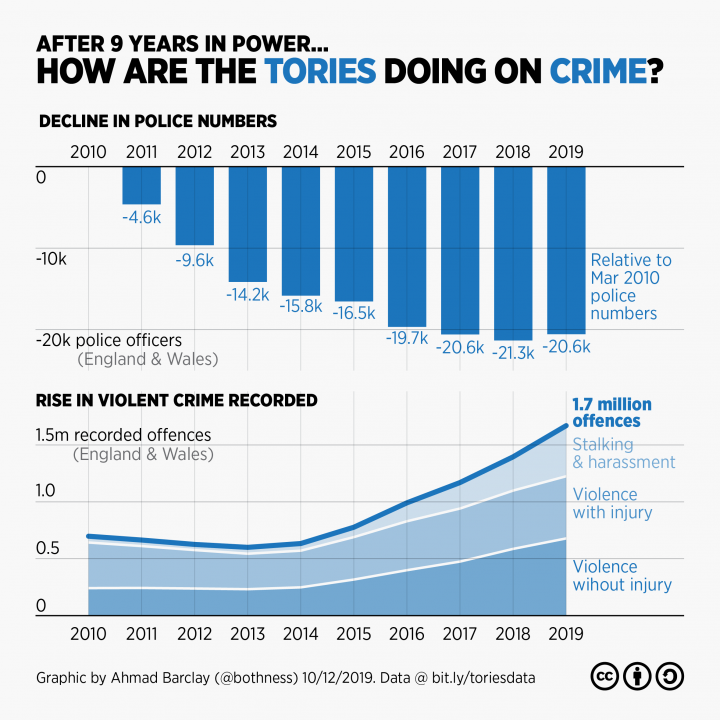 No matter what promises Johnson makes about “20,000 new police officers” if elected, yet again this only tells half the story. Because in England and Wales, the number of police dropped from 20,600 between March 2010 and March 2019. This brought numbers down to 123,200 officers by 2019. As Channel 4 FactCheck noted, “the new officers will simply cancel out previous cuts and get us back to 2010 levels”.

But the debate over police numbers is also a smokescreen which ignores the deeper issues about the rise of violent crime, especially among young people. We can’t overlook the impact of nine years of Conservative-led cuts and the damaging impact of austerity on a whole generation of young people. And nor can we ignore the way police treat too many young people, particularly those from Black, Asian and Ethnic Minority communities. As Network for Police Monitoring (Netpol) coordinator Kevin Blowe told The Canary:

All we are seeing is posturing from those who always insist more policing is the first option, rather than the absolute last resort, to every problem in society.

As Barclay also pointed out, continued Tory privatisation hurts “everyone’s pockets”. Since 2010, the cost of everything from stamps, to utilities, to public transport rose far above inflation. 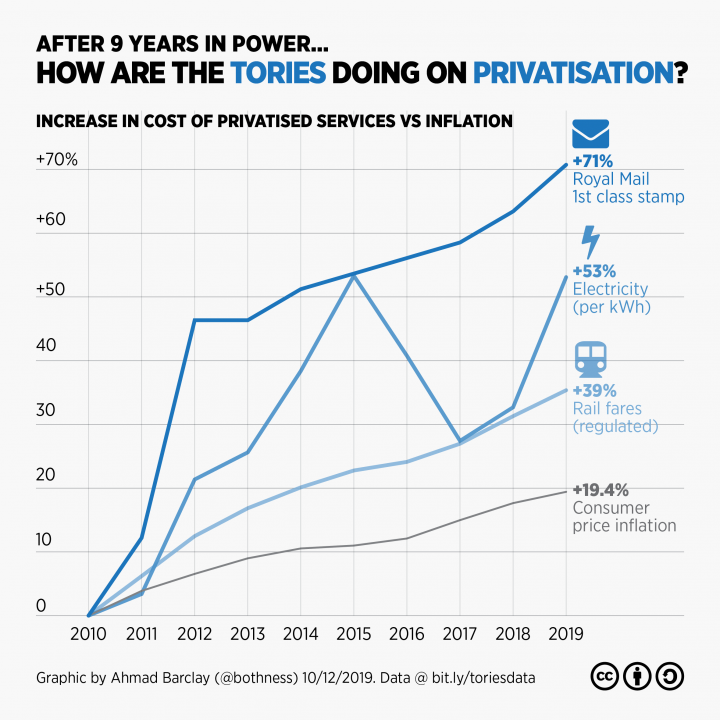 One of Labour’s key manifesto promises is to return these services to public ownership and end privatisation for profit. It states:

We will bring rail, mail, water and energy into public ownership to end the great privatisation rip-off and save you money on your fares and bills.

Facts, figures and statistics can feel overwhelming and daunting, especially during an election. But Barclay’s work translates these into a beautifully simple format and everything has been meticulously researched.

They say a picture tells a thousand words, and these are pictures that everyone needs to see before casting their vote on 12 December.