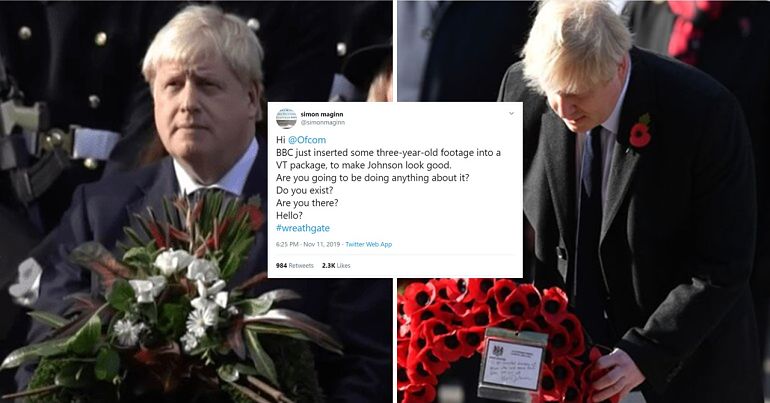 During Remembrance Sunday services, Boris Johnson laid his wreath upside down. It’s the kind of gaffe that could and would have haunted him until election day. But the BBC kindly replaced the mistake with footage from 2016, wilfully or otherwise shielding Johnson from the consequences. The BBC claims this was a simple mistake. But literally nobody believes it.

Broadcasters and newspapers normally spend Remembrance Sunday determinedly focussing their ire on Jeremy Corbyn. He’s too scruffy, he needs a shave, he didn’t bow low enough, he bowed too low like the jam-eating surrender monkey he is! It’s relentless. One year they even claimed he did a jig, as if dancing on the graves of Britain’s war dead. In fact, he’d been sharing a tender moment with 92-year-old World War Two veteran George Durack, who’d been cropped out of the image.

There is a landfill somewhere overflowing with the acres of newsprint dedicated to bashing Corbyn on Remembrance Day. So you’d think such sensitive souls would be all over Johnson. Um, no. Instead, the footage was replaced (the BBC insists ‘accidentally’) with unblemished footage from 2016. So instead of a scruffy Johnson making an idiot of himself, the public saw a clean cut Johnson laying his wreath perfectly.

2) It would take huge effort to ignore the film YOU JUST TOOK and dig out old footage #wreathgate
https://t.co/gfKLmbssmp

The BBC claims this was an honest “production mistake”. I mean really, who hasn’t edited out a major gaffe by a sitting prime minister weeks away from a general election with three-year-old footage? Come on. Unfortunately for the BBC, the public is just not in the mood for this nonsense right now.

Dear BBC, when did you lose your collective senses? When did you decide it was a good idea to risk a much loved public institution for the sake of the Tory Party? 3yrs ago I would have stood up for you, now, not a chance. I am ashamed. #wreathgate

#wreathgate should be the end for the BBC.
Not content with just misrepresenting, distorting and lying, they're now actively faking news, literally.
It would shame a tin-pot dictatorship.
I think we need direct action to take this garbage off the air.
We need to stop the BBC.

Even former BBC staffers came forward to undercut the corporation’s version of events.

I worked for ⁦@BBCNews⁩ for a dozen years – it’s near impossible for this to be a mistake (sad to say). We must know more #wreathgate https://t.co/CAXc4bouTV

I used to work for @bbcnews. The previous day's footage is right there in front of you. Footage from 3 years ago needs to be specially ordered from the Library. What sort of 'error'is that? #wreathgate #wreath
If they're lying like that, this needs investigation. #bbcbias https://t.co/IGO0ezghNc

But the BBC maintains its position regardless. Rob Burley, the BBC‘s editor of live political programmes, issued a stern tweet on the subject.

The whole #wreathgate thing really is like the Cyril thing. Despite the intrinsic absurdity of the allegation and all the evidence that it was untrue, wave upon wave of insulting, self-righteous and hysterical tweets keep on coming because people really want it to be true.

It did not help matters at all. The replies were fairly brutal. 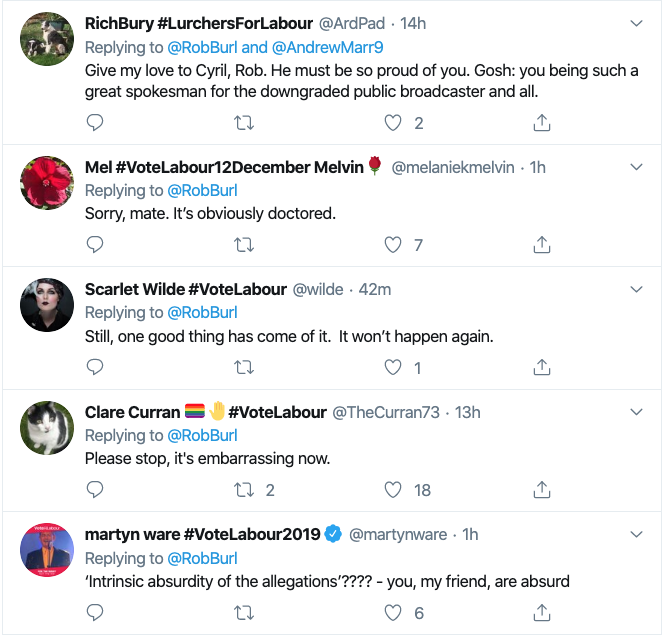 Whether the BBC edited the clip intentionally remains to be proven. But the BBC has earned the mistrust it’s being faced with now.

After the Panorama on Labour antisemitism doctored emails to give different meaning to their contents, the Labour Party described it as “a seriously inaccurate, politically one-sided polemic, which breached basic journalistic standards”.

Then there was the Newsnight set that pictured Corbyn as a Russian stooge.

"People were not completely clear about what he was saying" – previous special advisor to Harriet Harman and Ed Miliband, @ayeshahazarika, gives her thoughts on Jeremy Corbyn's Russia response #newsnight pic.twitter.com/hhDCUJ8rNL

The cases are so many and so grievous that Jolyon Maugham QC, director of the Good Law Project, intervened on the issue. In 2018, he claimed the BBC had regularly used “coded negative imagery” of the Labour leader since his 2015 election. So people have little patience with the BBC then cleaning up negative imagery of his political opponent Boris Johnson.

The BBC is in danger of losing public support permanently with its continued failure to provide real balance. It’s working against the very people that would historically have been its greatest allies. And no amount of nonsense apologies can cover the sense that something is very wrong with our public broadcaster.