While everyone focused on the Tories ‘Trump alliance’ with Farage, Johnson was up to something very sinister - Canary 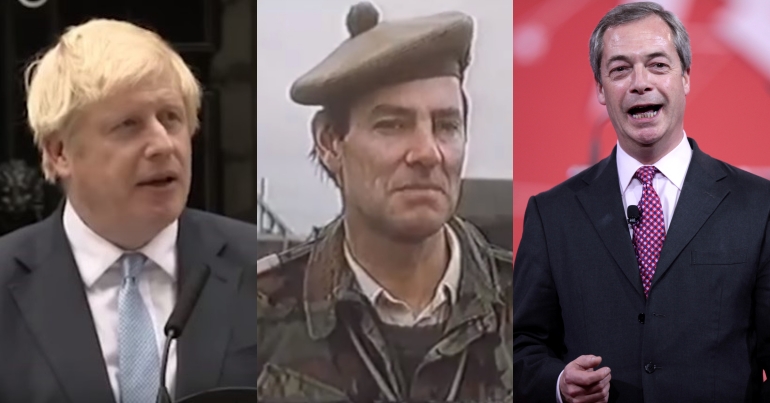 On 11 November, the media gave full attention to Nigel Farage’s decision not to stand his Brexit Party candidates in any of 2017’s 317 Tory seats. Corbyn called it a “Trump alliance”.

Meanwhile, Boris Johnson was up to something quite devious. He pledged to change the law to protect British army veterans who served in the north of Ireland from prosecution for killing. So, along with his pact with Farage, this tells us a lot about where Johnson’s loyalties lie.

Family reaction to the plan

One justice campaigner for the victims of British army killings responded angrily, saying:

This is effectively a licence to kill. A ‘get out of jail card’ or a blanket amnesty for killers in their war machine from the Bogside to Baghdad

The brother of a boy shot dead by a British army plastic bullet 37 years ago said politicians are using victims like a “political football”.

Irish minister for foreign affairs Simon Coveney said the Irish government hadn’t been consulted and that it would be in contravention of the Stormont House Agreement (SHA). The SHA already has agreed mechanisms for dealing with past killings. So what makes Johnson’s pledge even worse is that he might just be using it as a cruel and cynical “part of an election campaign”.

There must be no statute of limitations, no amnesty, for anyone who broke the law in NI. Where evidence exists, they should face the law, without exception.

But there was also veteran and unionist opposition to Johnson’s plan. Doug Beattie, a former British captain and Ulster Unionist assembly member, condemned Johnson’s plan, saying it would create:

a moral equivalence between veterans and the terrorist.

An end before a beginning

Johnson would achieve this amnesty from prosecution by amending the Human Rights Act 1998. He’d amend it so it wouldn’t apply to cases before 2000. A source for the Conservatives said:

We will amend the Human Rights Act 1998 to specify that it doesn’t apply to issues – including any death in the Northern Ireland Troubles – that took place before the Act came into force in October 2000. This restores the intended scope of the Act.

But as The Canary has reported, hardly any action has been taken against British forces anyway.

What the British government thinks

There seems to be a lack of knowledge among British government officials about past prosecutions. In May 2018, Theresa May said the investigations were “patently unfair” as the armed forces were the only ones being investigated. This is untrue because the greatest number of investigated killings is those attributed to republicans.

In March this year, former secretary of state for Northern Ireland Karen Bradley apologised after she said killings carried out by the police and army during the conflict in Ireland “were not crimes”.

To date just four British soldiers have been convicted of shooting civilians while on duty, with one murder conviction being overturned on appeal. According to the Pat Finucane Centre (PFC):

all four were freed after just five years of their life sentences through the use of the “Royal Prerogative of Mercy”. All were allowed to re-join the British army.

Additionally, the Public Prosecution Service (PPS) admitted that out of the 32 legacy cases decided since 2012, only five relate to the army. The majority of these still focus on Irish republicans.

The worst of both worlds

Building a fairer society by protecting the rights and bettering the lives of ordinary people is key in this election. Whether Johnson intends to follow through on this proposal or whether he’s just electioneering doesn’t matter. This pledge and his pact with Farage makes it clear whose interests he’s serving.