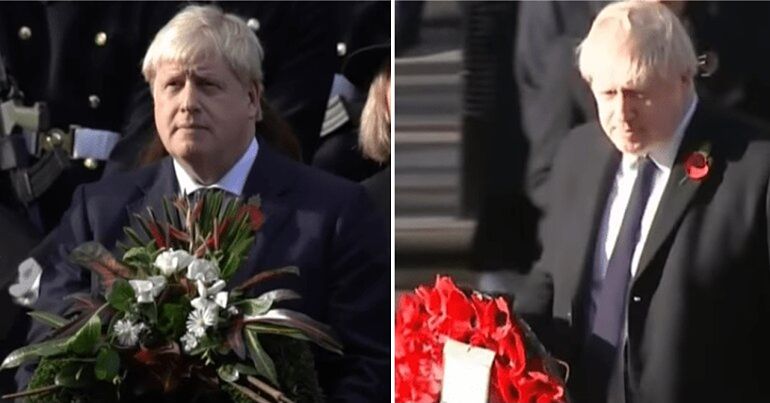 CORRECTION: This article was originally headlined “The BBC hoodwinks viewers, shielding Boris Johnson from his Remembrance Day gaffe”. We corrected the headline, introduction and conclusion of the article at 4.10pm on 11 November to make clear it was an accusation rather than a statement of fact. The BBC denies the accusation, saying it played the wrong footage as a result of a “production mistake”.

The BBC has played the wrong clip of Boris Johnson, leading to accusations that it hoodwinked viewers to protect the prime minister from his Remembrance Sunday gaffes:

Today, the BBC used 3 year old footage of Boris Johnson laying a wreath in order to protect Boris Johnson from ridicule at yesterday's gaffes where he stepped out early, arrived disheveled and placed the wreath upside down. pic.twitter.com/Yu92yKIZvg

On 10 November, the prime minister laid his wreath, to commemorate the millions of people who’ve died in wars, upside down. Instead of holding Johnson to account for the insult, the BBC broadcast archive footage of Johnson laying a wreath in 2016:

Hi @BBCNews. Could you please explain the editorial decision to use this footage of Boris Johnson laying a wreath in 2016 on this morning's news bulletin instead of footage from yesterday's service?#BBCBreakfast #BorisJohnson pic.twitter.com/bzyw1bktx7

The BBC has admitted it used the wrong footage but said it was a “production mistake”:

This morning on the programme we incorrectly used footage from a Remembrance Day service that was not filmed yesterday.

This was a production mistake and we apologise for the error.

Judging by the responses to the tweet, some viewers aren’t convinced by this explanation:

Fancy using the deaths of soldiers for your propaganda. Johnson lays wreath upside down but three year old footage used instead.

Is this what the soldiers died for? https://t.co/qMArN9AVnL

I've worked in TV for 40 years. The idea that a 'production error' makes a neat cut at exactly the point where the prime minister takes his wreath and cuts back neatly afterwards, inserting 3-year-old footage of that exact same moment is insulting & laughable. Tell the truth. https://t.co/NUnFXJ287x

Don’t worry, the BBC‘s got you

This isn’t the first time the BBC has aired incorrect footage. The outlet broadcast the wrong footage of Corbyn responding to the Conservative government’s budget in November 2017. It claimed a “mistake”, although the accidents always seem to benefit the ruling class.

And in this election, the BBC seems dedicated to covering for Johnson. The people-funded broadcaster recently edited out footage of NHS staff booing the Conservative leader when he visited a hospital. Former British ambassador Craig Murray wrote that such coverage reminds him of the “Uzbek dictatorship”:

BBC News this evening pump out carefully staged and lit footage of Johnson visiting Addenbrooke's Hospital, wearing a lab jacket and holding a pipette, without mentioning the fact he was roundly booed and had to flee the venue.
It's just like being back in the Uzbek dictatorship.

The apparent propaganda harks back to the 2017 election. For instance, in an election report on 16 May 2017, the BBC exaggerated the impact of Labour’s tax plans on some earners by 971%.

During the last election, the BBC also:

A Remembrance Sunday the establishment wants to forget

Johnson didn’t only lay his wreath upside down on Remembrance Sunday. There was yet another gaffe too:

Watch Boris Johnson step out of the line at the wrong moment.

Now imagine if this was Jeremy Corbyn. Imagine the headlines. Imagine the faux outrage. The Mail and Express et al would call him a traitor.

What do you get when it's Boris Johnson…

The BBC seems to many to be working overtime to convince your family, friends, and neighbours into supporting a corrupt status quo. The only way to win is through real conversations between real people about the issues at stake.