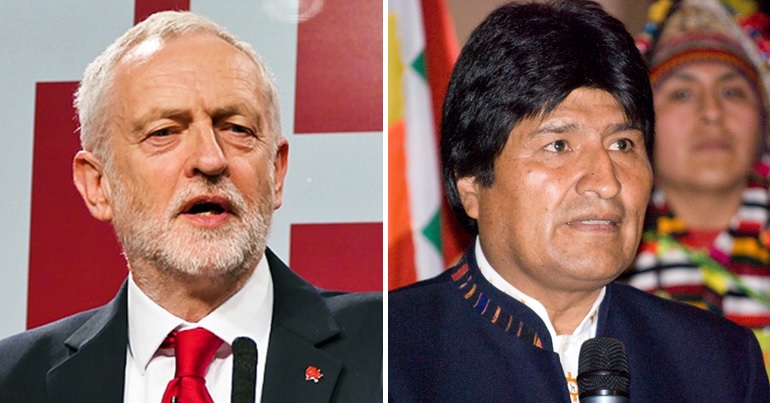 In one of Latin America’s greatest tragedies in recent years, a hard-right coup is currently underway in Bolivia – where a successful progressive government had ruled for just under 14 years.

To see @evoespueblo who, along with a powerful movement, has brought so much social progress forced from office by the military is appalling.

I condemn this coup against the Bolivian people and stand with them for democracy, social justice and independence. #ElMundoConEvo

As Scottish politician Ross Greer stressed, meanwhile, this coup shows that “the days of US-backed coups in South America are far from over”.

The military forced President Evo Morales out of power on 10 November, after weeks of violent hard-right protests. Earlier in the day, he had already called for a new election in an attempt to calm tensions. But he later said he was resigning in the hope of stopping right-wing destruction, kidnappings, and attacks and death threats against politicians and their families. Armed intruders later broke into Morales’s home in Cochabamba:

Bolivia's guarimbas demolish President Evo Morales' home. We are still trying to tally the number of homes, belonging to lawmakers of the MAS, which have been burned and destroyed in recent days by terrorists of the right. pic.twitter.com/58SE9vNyZj

The coup left no natural successor to Morales, because it also forced the resignation of the country’s vice president and the Senate president, who was next in line to lead. The only other official listed by the constitution as a successor – the head of the lower house – had already resigned.

Morales was the first member of Bolivia’s large indigenous population to become president, and he remains deeply popular among many Bolivians. While no government is perfect, many people considered Morales’s administration to be the “most successful” left-of-centre government in Latin America – and perhaps even the world. As The Canary previously reported, his government lifted “millions of people out of poverty” and oversaw very impressive economic growth despite “deep economic crises and an economic slowdown elsewhere in Latin America”. For these reasons, Bolivians recently re-elected his government (though with a reduced majority). Corbyn congratulated Morales on his victory and praised his government’s achievements.

Morales believed in using Bolivia’s natural resources to benefit its inhabitants rather than powerful corporations:

Why was Evo Morales overthrown? He was nationalizing the highly profitable lithium industry and planning to deal directly on the international market rather than exporting the commodity at bargain prices to Western corporations https://t.co/eaBrsre1ff

He was also a stauch critic of US imperialism:

This is the leader the world has lost.

This from 2018, when Evo listed the crimes of the US, whilst sitting next to Trump at the UN. He was never defeated democratically, they could only win with a military coup. pic.twitter.com/BRvP8vIiF4

A “fascist coup” with US backing

Just days before his resignation, Morales had warned that a “fascist coup” was underway.

For many decades, the US has sponsored and supported terrorism throughout Latin America to prop up hard-right corporatists and undermine democracy and human rights. Hundreds of thousands of people have died in the process. And amid the coup in Bolivia, intellectuals Noam Chomsky and Vijay Prashad pointed firmly to US involvement, saying:

The coup is driven by the Bolivian oligarchy, who are angered by the fourth election loss by their parties… The oligarchy is fully supported by the United States government, which has long been eager to remove Morales and his movement from power. For over a decade, the US embassy’s Center of Operations in La Paz has articulated the fact that it has two plans – Plan A, the coup; Plan B, assassination of Morales.

People also highlighted the involvement of the highly controversial Washington-based Organization of American States (OAS), which receives most of its funds from the US and has been accused of serving US foreign policy interests:

"This is a military coup — there's no doubt about it now," @ceprdc's @MarkWeisbrot says of Bolivian President Evo Morales stepping down Sunday, shortly after the Bolivian military called for his resignation. pic.twitter.com/ilaHWSHn4Q

It is unfortunate but not surprising to see a Guardian editor credulously accept the debunked claims of the OAS, which is 60% funded by the US & has been used repeatedly to undermine US-mandates targets of regime change & subversion: https://t.co/VNKVtcD2hO https://t.co/i4nMQPSyIx

Others pointed out the presence of racism among those backing the coup:

The ugly face of Latin American right is on full show today in Bolivia as demonstrators burn the indigenous flag in celebration of a successful coup against the country's only indigenous President. https://t.co/bQdRlQr0xs

Supporters of Morales and his achievements, meanwhile, are already resisting the coup. And so should everyone around the world who believes in democracy, social justice, and human rights.