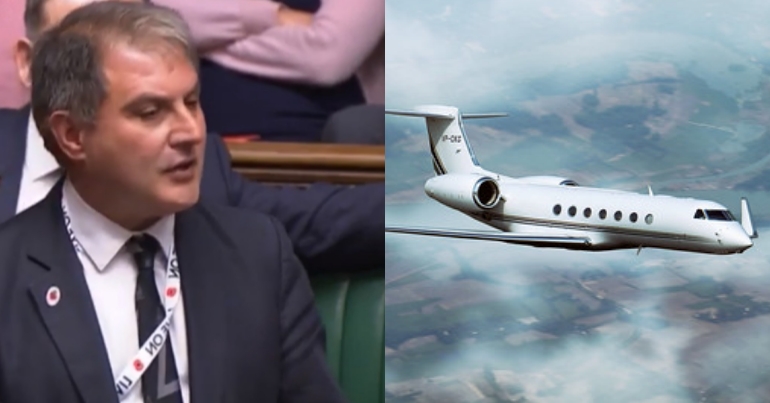 Accepting such donations suggests Lopresti is either completely out of touch or wholly uninterested in the effects the airline industry has on the climate crisis. So in effect, it really shows he cares little for the voters of Filton and Bradley Stoke.

These donations come when the UK claims to be serious about tackling the climate crisis. Additionally, 261 councils have already declared a climate emergency. In June this year, the government announced it would reduce carbon emissions to zero by 2050. This was under the terms of its plan to tackle climate breakdown, which has been criticised for being impractical.

In particular there’s pressure on the aviation industry to do much more about its role. The industry needs to act on practices like “fuel tankering” where planes fill up with extra fuel to avoid paying more, but which also leads to greater greenhouse gas emissions. So Lopresti’s financial relationship with the airline industry is baffling to say the least.

First elected in 2010 and an ardent Brexiteer, Lopresti is also a personal friend of KAC company head Dr Uday Nayak. Nayak has links to tax havens in the Caribbean and Mauritius. And like Lopresti, he also appears to be a Brexiteer.

Nayak claims he gave the money to Lopresti to go towards his election campaign in this marginal constituency. The constituency voted Remain in 2016.

And it’s a donation that could make a big difference given Lopresti spent £5,626 in the 2017 campaign. Meanwhile the second place Labour candidate spent just £3,885.

The Canary contacted Lopresti’s office for comment but he did not respond by the time of publication.

And it could get worse

Aviation firm Honeywell Aerospace claims almost 8,000 new private jets will be bought over the next ten years. But much more worrying is the expectation that the carbon footprint per passenger on such jets could be up to 40 times as much as on commercial flights.

The Common Wealth report goes on to state: “UK airports handled 128,000 private jets operating between Europe and the UK in 2018” and that estimates suggest: “on average, each of these flights carried fewer than five passengers”.

Common Wealth’s analysis arrives at a lower estimate for the difference in carbon footprint but still suggests:

In parliament, Lopresti has “generally voted against measures to prevent climate change”. The former soldier has also argued for legislation to protect army veterans from facing justice for killings in the north of Ireland. This is an argument that seems to be in keeping with Johnson’s pledge to end such prosecutions.

He’s been accused of bullying and harassment in the workplace, and he’s also had to repay wrongly claimed expenses in 2017-18.

So the people of Filton and Bradley Stoke have a simple choice. They can choose an ardent Brexiteer, accused of workplace bullying and who takes money from an industry in climate change denial.

Alternatively, they can choose a candidate who believes in a new Brexit deal and referendum. This is a candidate who also supports the green new deal that will reduce greenhouse gases and create jobs. The choice seems obvious.