Last night, the BBC edited a Labour email and broadcast the hit job to millions - Canary 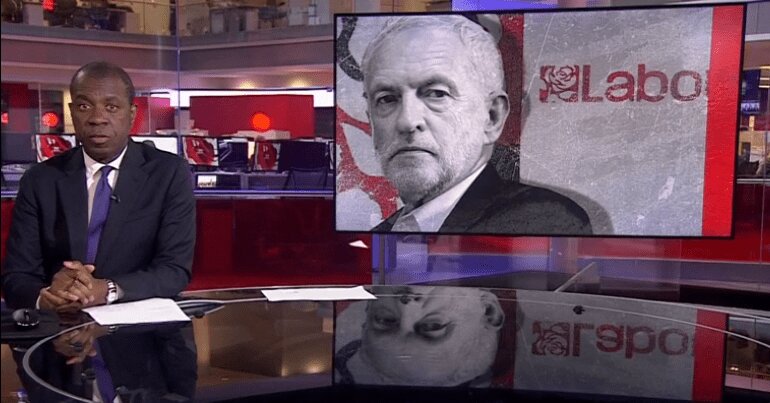 On 10 July, the BBC stood accused of “doctoring’ a Labour email. The public organisation then broadcast the result to millions – not once, but twice.

The broadcaster first showed the edited email during a Panorama episode entitled Is Labour Antisemitic?. It later discussed it on BBC News at 10. The BBC repeated the misrepresentation even though Labour complained:

The edited email presented Labour’s director of communications Seumas Milne as interfering in the party’s disciplinary process, which is supposed to be independent. The publicly-funded broadcaster’s version of Milne’s email read:

something’s going wrong, and we’re muddling up political disputes with racism… I think going forward we need to review where and how we’re drawing the line.

But Labour released the full email, which shows that Milne was responding to a request from a former Labour staff member for a view on a complaint. And in the email, he wrote:

Having identified the subject of the complaint as a “Jewish activist, the son of Holocaust survivor”… if we’re more than very occasionally using disciplinary action against Jewish members for anti-Semitism, something’s going wrong and we’re muddling up political disputes with racism.

In response, a BBC spokesperson told The Canary:

The significance of the email from Seumas Milne is that it showed one of the most powerful figures in the Labour Party expressing concern about the handling of anti-semitism complaints and suggesting the wider process should be reviewed. This goes contrary to the Labour Party’s claims that this process was independent of the Leader’s Office. The impact of this email on those dealing with the complaints process was made clear in the eyewitness testimony shown in the programme.

But in response to a request, Milne was specifically talking about Jewish people being accused of antisemitism. The quote Panorama used omitted that.

Effectively, Milne warned against Labour participating in the ‘wrong sort of Jew’ antisemitic trope in the email. Because the subject of the antisemitism complaint in question was a “Jewish activist” and “the son of Holocaust survivor”.

We are denounced as the wrong kind of Jews, not actually members of the Jewish Community… ‘antisemitism enablers’ and other insulting terms.

The Labour right and corporate media have also accused Corbyn of antisemitism for meeting up with Jewish people, such as hosting Jewish Holocaust survivors in parliament and attending a Jewish Sedar (Passover feast).

On social media, people were aghast at the BBC‘s conduct:

BBC News at 10 just repeated lines from an email that was basically doctored by Panorama to completely change its meaning. I’ve complained to the BBC and I urge you to do the same by calling 03700 100 222. They had been told but chose to ignore this fact. https://t.co/8k4VFQyum5

The BBC is doctoring emails to attack a Labour leader and his staff. This has to be a nadir for the corporation in its coverage over the last four years. Shocking!#Panorama https://t.co/Cuo4AV5TBr

In airing outright fabrications & falsehoods in their Labour antisemitism #Panorama, the BBC has finally, conclusively, exposed itself to the entire UK as a shamelessly anti-left propaganda organisation.

There needs to be an urgent inquiry, & the BBC must be fully democratised.

Even corporate journalists like the FT‘s chief political correspondent suggested that the BBC is misleading viewers:

Labour is livid about tonight’s BBC Panorama programme looking at how the leadership has handled anti-Semitism cases.

Here’s one claim in Panorama vs Labour’s defence.

The quotation does appear to have a totally different meaning when taken in its entirety…. pic.twitter.com/Nv5o3T7Jti

This time, the BBC has stepped way over the line. Labour had complained that the broadcaster was completely misrepresenting Milne’s email. Yet it broadcast the selective edit twice to millions of people. That is utterly unacceptable conduct towards the official opposition.