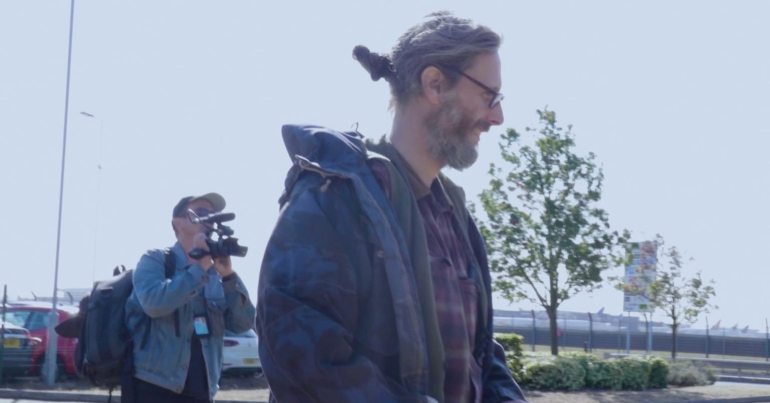 This article was updated on 19 September at 09:30 to include a revised statement from the Metropolitan police. Originally a spokesperson told The Canary that the arresting officers did not know the man was a journalist when he was arrested. This statement was revised after the bodycam footage of the officers was reviewed.

A photojournalist, who is a member of the NUJ, was arrested by the Metropolitan Police on 18 September for photgraphing a protest.

Guy Smallman was filming one of the Heathrow Pause protesters flying a toy drone near Heathrow when he was arrested. As the image above shows, he was clearly wearing a badge that identified him as press.

As people pointed out on Twitter, Smallman is a well known and well respected journalist:

Disturbed to hear that well known news & documentary photographer @GuySmallman has been arrested while “filming activists flying drones” at Heathrow Airport. I hope @metpoliceuk recognise him as a journalist and release him quickly #PressFreedom #journalism #phnat

Guy Smallman has been a very successful professional journalist for over a decade. https://t.co/KNwNq7dguV

Others pointed out that journalists had filmed other days of the drone protest without arrest:

His arrest also led people to wonder if it was “an attempt to avoid scruitny of police behaviour”:

Arresting a photojournalist for documenting a public protest smacks of an attempt to avoid scrutiny of police behaviour. There's been clear guidelines about this sort of thing for more than a decade. https://t.co/Of892nlIar https://t.co/QTZzRlxs5l

Kevin Blowe, coordinator of the Network for Police Monitoring told The Canary:

Campaigners need the work of journalists to cover the issues they hope to promote but it has generally been understood and accepted by the police that the press observes, rather than participates, in protests.

Guy Smallman’s arrest is, therefore, not only an alarming attack on the freedom of the press but a strong indication senior officers are intending to crack down hard on environmental protests, after the criticism they received about the policing of Extinction Rebellion’s huge action in London in April.

We have feared such a knee jerk reaction for some time, especially with campaigners returning to the streets in October. We are particularly worried that legal observers, who are also non-participants in protests, will face an increased risk of arrest too.

A spokesperson for Metropolitan Police told The Canary:

A further three people have been arrested today, Wednesday 18 September in relation to protest activity that took place in the vicinity of Heathrow Airport.

All three have been taken to a south London police station and remain in custody at this time.

A total of 24 people ([A] to [X]) have now been arrested as part of this operation. [A] to [U] have been bailed or released under investigation pending further enquiries.

It is now clear that [X] is a photographic journalist and upon further investigation officers are satisfied that he was not involved in any criminal activity. He has now been released with no further action.

Officers have reviewed body worn footage from before [X] was taken into custody and he states he was a journalist and was in possession of a press pass.