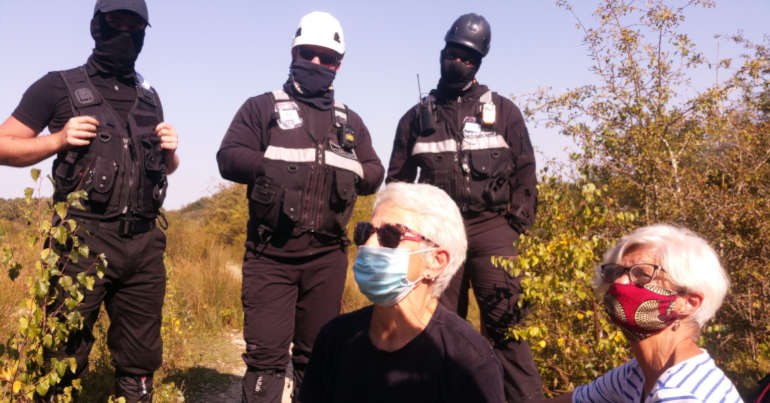 Bailiffs have evicted tree protectors from a protest encampment at Calvert Jubilee Nature Reserve in Buckinghamshire.

Part of the reserve is due to be destroyed to make way for the HS2 high speed trainline.

Berkshire, Buckinghamshire and Oxfordshire Wildlife Trust (BBOWT) has accused HS2 of not giving them notice of the eviction. BBOWT owns the Reserve, but a spokesperson for the Trust told The Canary that HS2 has forced them to give up possession of parts of the land under Schedule 16 of the High Speed Rail (London – West Midlands) Act 2017.

HS2 has previously been called “the most expensive and destructive infrastructure project in Europe” and opponents say it will “destroy almost 700 wildlife sites”.

At 6am on 22 September, the protest site at Calvert Jubilee Nature Reserve was evicted.

Indra Donfrancesco, an organiser against HS2, told The Canary:

At 6am today National Eviction Team, dozens of police and private security burst into the peaceful protection camp where only 3 people were living, slashing tents and securing the area…

It has been a privilege to get to know this beautiful lakeside reserve for a season, watching wild fowl like Bittens nest. it is heartbreaking to now hear chainsaws in their woods.

‘A haven for wildlife’

Local people are not happy about the potential loss of this beautiful site. BBOWT tweeted:

Today, without notice, #HS2 have taken possession of our Calvert Jubilee nature reserve. They will now destroy decades of hard work by @BBOWT staff & volunteers who have made it a haven for wildlife. This is a sad day for us, and for all who fought to save this special place. pic.twitter.com/S2CDhM8RG9

Many opponents of the project shared pictures of the reserve on Twitter, and of the ecosystems which will be lost as a result of the project:

Slideshow of beautiful Calvert Jubilee nature reserve in Bucks, a much loved wildlife haven maintained by @BBOWT volunteers. This morning #HS2 bailiffs seized possession without notice of a large area of the reserve home to rare butterflies & nightingales. https://t.co/2KM2mVV98z pic.twitter.com/uM2qWo6UBH

Reflecting on some happy times spent at @BBOWT Calvert Jubilee Nature Reserve before #HS2 arrived today to destroy it. pic.twitter.com/eEPc4kWL91

BBOWT has been resisting the destruction of the reserve since it was proposed back in 2010:

Since the proposed route was published in 2010 we have been battling against the Government’s plans for HS2 and the destructive impact the project will have on our wildlife and countryside. BBOWT led the local campaign to speak up for wildlife, challenged the lack of Strategic Environmental Assessment (SEA) for the project, and continued to make the case for better wildlife protection.

BBOWT made a statement accusing HS2 of not giving notice for the eviction:

BBOWT is devastated that High Speed 2 Ltd have now taken legal possession of a large section of our Calvert Jubilee Nature Reserve.

Anti-HS2 protestors who had set up camp have been removed from the site by security guards and police. HS2 have a warrant for the site so officially have taken over.

Despite HS2 assuring us that they would give us notice of when they would take possession, they moved onto site without informing us.

Construction workers will destroy decades of hard work by BBOWT staff and volunteers who have made the site a haven for wildlife.

An area on the eastern side of the reserve will be flattened to make space for the railway.

The Canary contacted HS2 for comment, but we had not received a reply at the time of writing. Thames Valley Police confirmed to The Canary that their officers had been present during the eviction, but claimed that they:

were in attendance to provide reassurance, to ensure public safety, and facilitate the rights of both the protestors and HS2.

Land protectors set up a camp at the Reserve three months ago, just one of many protest camps set up around the country to oppose HS2.

Last week a blockade was set up to prevent the eviction of the site. It was eventually cleared away by Thames Valley Police. This statement was posted on Facebook by one person who was arrested during the eviction. The demonstrator, using the alias ‘Miss Six’, berated the mainstream media for their silence on the devastation caused by HS2:

It might sound dramatic, but the fate of our countryside, nay, our LIVELIHOOD, relies on the common folk sharing these reports and livestreams. The media (a tool strictly reserved for promoting corporate propaganda) sure as hell ain’t gonna do it. The power belongs to the PEOPLE. So keep sharing, keep viewing, and never ever shut up because of the fear of “controversy”. Your voice matters. Get out there and be the change you want to see in the world 🌟

Love and good vibes from the tower 🙂❤✌

‘We are not stopping’

The fight against HS2 is ongoing. Protests are planned at the beginning of October against the destruction of woodland by HS2. According to Donfrancesco:

We are not stopping, we will continue to protect every tree and habitat on the destructive path of HS2