The new coronavirus rules only work if you're rich - Canary

Boris Johnson revealed the Tory government’s latest coronavirus (Covid-19) measures on Tuesday 22 September. But some of the advice will only work for richer people. And it shows that once again the Tories are abandoning the poorest people in the UK.

The government has outlined several new rules along with advice. BBC News summed them up. It said that in England, the new rules included:

But the work from home advice is a problem. Not least because many of the poorest workers simply can’t do this.

Research by the think tank the Resolution Foundation found that rich people’s “ability” to work from home is greater than the poorest workers: 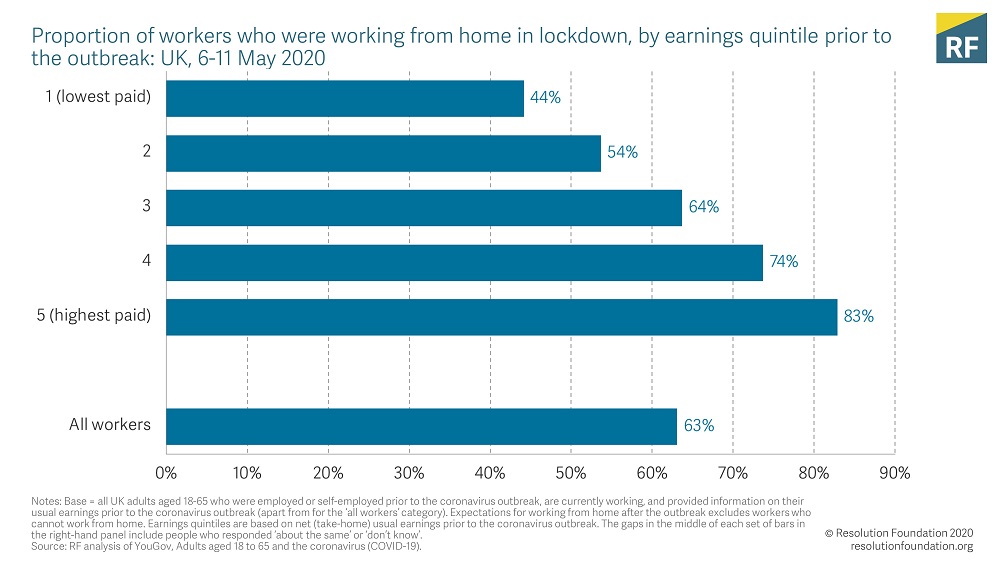 This also shows in its industry-by-industry analysis. The lowest paid sectors often provide the least ability to work from home: 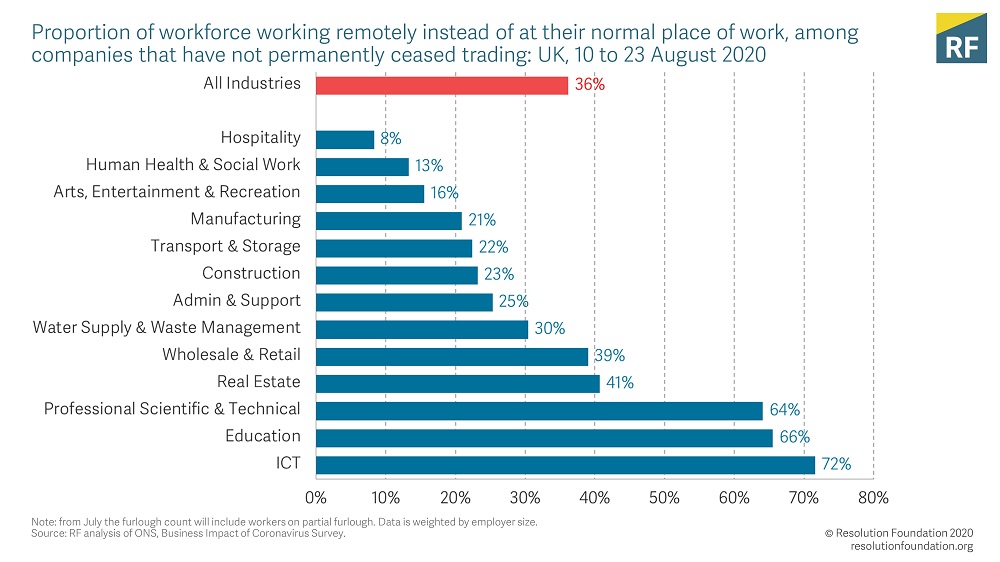 The Welsh government has partly addressed this issue.  If low-paid workers have to self-isolate due to coronavirus, it is paying them £500. This is to cover the 14 days of lost earnings.

BBC News reported that the furlough scheme is ending on 31 October:

Almost 10 million jobs have been supported by furlough, which pays the wages of those who cannot work because of coronavirus.

Chancellor Rishi Sunak has ruled out extending the scheme.

But the Resolution Foundation disagreed with that figure. It said on 1 August:

this is simply not true. Although it is true to say that in total nine million [since then, 10 million] people have been furloughed for at least one three-week period since March, this cumulative figure does not reflect what’s happening right now.

In other words, 10 million people is the total figure – not the figure at any one time. It said on 18 September that:

Our latest estimates suggest that take-up of the JRS in late August was around 3 million, highlighting that while we’re seeing significant numbers returning to work, there is a real risk of a large rise in unemployment as the scheme is phased out over the next six weeks.

The Resolution Foundation said that people working in hospitality and leisure were at risk.

So, low-paid workers are facing a perfect storm. Many are unable to work from home. The furlough scheme is coming to an end. And for some, there’s no guarantee they’ll keep their jobs.

Lockdown has meant a working from home revolution…

But, while widespread home working has been essential for controlling the pandemic and has worked for many people, it is not an option for millions of other workers – particularly for low-paid workers in customer-facing roles who will again face the biggest health risks from the rising virus caseload. There’s also a world of difference between older home-owners, and those living in crowded flats or alone, for whom enforced home working has big downsides.

All this comes against a backdrop of Johnson blaming rising coronavirus cases on “too many breaches” of the rules by people. But it’s been some of the government initiatives that have helped spread the virus. The government told people to “Eat Out to Help Out“. So, they did. And then it turns out the scheme could have helped cause the rise in cases.

Johnson also said that people’s common sense was the “greatest weapon”. But when the government sets rules which are impossible for the poorest people to follow, it’s unclear what he thinks will happen. Moreover, as always it’s the people at the bottom of society who suffer the most. The Tories’ call to work from home is just another example of institutionalised classism against society’s poorest people. And the richest? They just keep on getting richer.