PMQs was a waste of 12 minutes, until the SNP stepped in - Canary 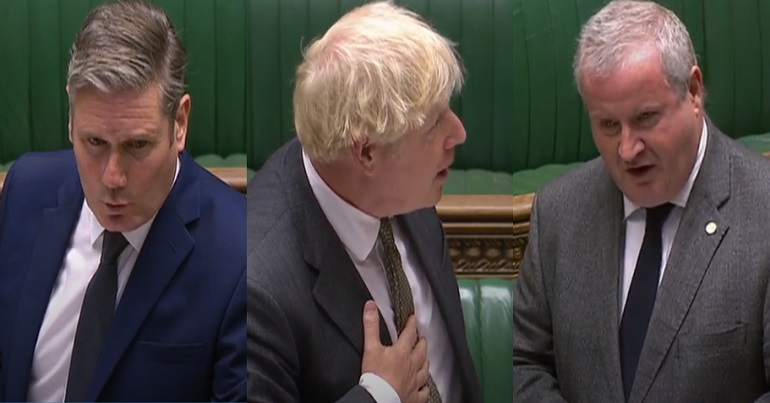 If you wanted to waste 12 minutes of your life, you could have watched Prime Minister’s Questions (PMQs) on Wednesday 23 September. That was until the SNP got involved.

Boris Johnson and Keir Starmer were both muddled, to say the least. Although the Labour leader did seem more robust than he has on previous occasions. Probably something to do with Angela Rayner and Ed Miliband’s mauling of the PM last week.

But Starmer still failed to land any direct blows. His choice of subject was all over the place. It seemed to be on test and trace. But Starmer hit Johnson from various angles, which came across as messy: from calling out his contradictions, to questioning his understanding of epidemiology, to school children struggling to get tests.

Johnson also floundered on his replies. From badly explaining coronavirus (Covid-19) epidemiology, to defending the disastrous Dido Harding, and the government sending children back to school. Overall, neither leader seemed on the ball – and neither of them came across as totally sure of what they were talking about.

But fear not. Because the SNP’s Westminster leader Ian Blackford bounded in to save the day.

The SNP: mauling the PM and showing up Starmer

Blackford got straight to the point, unlike Starmer’s rambling questioning. He said that “one million jobs” were at risk because of the furlough scheme ending; calling it “of the Tory government’s own making”. Blackford then went for the jugular. He said that Johnson:

must announce an immediate extension, no half measures, no half-baked projects, to this vital and life-saving scheme. Will the prime minister show [the] leadership required and save the jobs?

The PM floundered, not answering the question. He reverted to his now go-to, and rather creepy and epidemiologically dangerous, phrase:

What we will do… is continue to put our arms around the people of this country… and come up with the appropriate creative and imaginative schemes to keep them in work and keep the economy moving.

That’s so poor…. What we’re talking about is protecting the jobs of people today. It’s not indefinite… the first steps to any recovery is admitting that there is a problem. … The solution for millions of people right now is an extension… of the furlough scheme beyond October

The government so far has no plans to extend the furlough scheme. But at least Blackford’s probing was to the point, on one subject, and in a way that everyone watching could understand. Meanwhile, Starmer was convoluted, complex, and off-target. Despite his attempt at robustness and vigour, he fell way short of Rayner and Miliband’s mauling prowess.

Good job the SNP are there to pick up Labour’s slack.