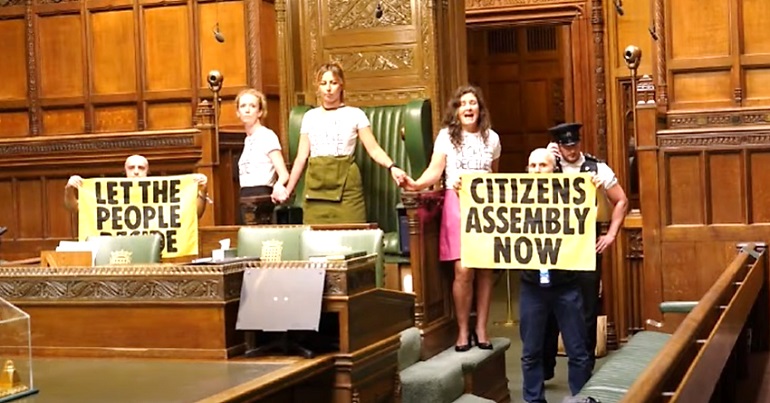 Extinction Rebellion (XR) UK have burst into parliament in protest. Members have superglued themselves to the Speaker’s chair. It’s to challenge the lack of action by the government and corporations on the climate catastrophe. XR are saying that parliamentary democracy isn’t fit for purpose, and that people should instead form “citizen assemblies”. Of course, superglue companies must be delighted. And, XR is not the first group to do this kind of stunt.

BREAKING NEWS: Extinction Rebellion supporters have superglued around the Speakers Chair inside the commons chamber.

Right now inside Parliament a speech is being read out demanding a Citizens' Assembly Now: “We are in crisis. We can not afford to carry on like this…" pic.twitter.com/JqKBasRaCH 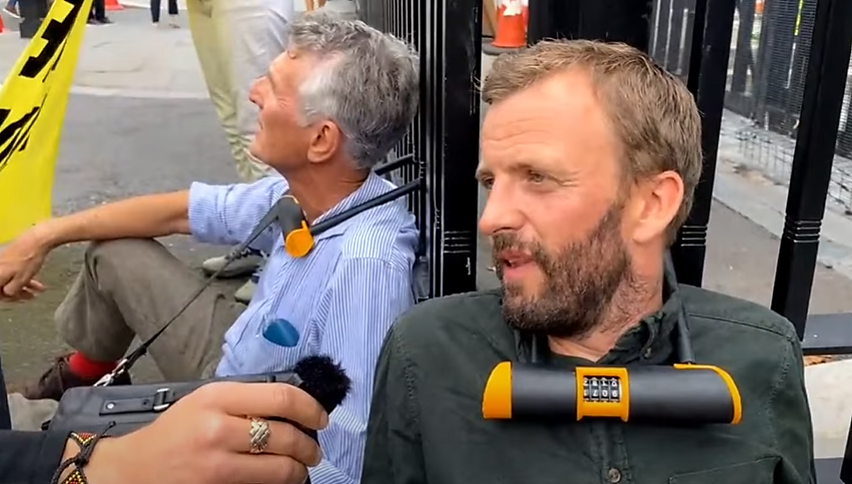 People attached banners to parliament itself:

On its Facebook page, XR UK said it and its members were:

currently protesting inside and outside of Parliament, demanding a Citizens’ Assembly on climate and ecological justice. Inside Parliament, protesters are taking action. Outside the building, protesters have dropped a banner from the scaffolding and have locked on in front of the railings.

There is an urgent need to upgrade our political system: a new Prime Minister will be chosen next week by a fraction of the country, and the cost of living crisis will leave millions unable to pay their bills this winter. A citizens’ assembly on climate and ecological justice would be a new, fairer politics that would represent ordinary people.

XR UK’s demands for citizens assemblies are based on the fact that politicians are not doing enough about the climate catastrophe. As the group wrote:

The Citizens’ Assembly on Climate and Ecological Justice will bring together a “mini public” of ordinary people to investigate, discuss and make recommendations on how to respond to the climate emergency. Similar to jury service, members will be randomly selected from across the country. The process will be designed to ensure that the Assembly reflects the whole country in terms of characteristics such as gender, age, ethnicity, education level and geography. Assembly members will hear balanced information from experts and those most affected by the emergency. Members will speak openly and honestly in small groups with the aid of professional facilitators. Together they will work through their differences and draft and vote on recommendations.

The Citizens’ Assembly will be run by non-governmental organisations under independent oversight. This is the fairest and most powerful way to cut through party politics. It will empower citizens to actually work together and take responsibility for our climate and ecological emergency.

As of 1pm on Friday 2 September, XR UK’s protest was still ongoing.

Of course, XR is not the first group to breach parliament in protest over our politicians. For example, in 2015 Disabled People Against Cuts (DPAC) entered parliament – subsequently being abused by police and security. The group repeated the action in 2016, when security told the BBC to stop filming because of it.

Moreover, the protest seemed all a bit white – with XR’s historical diversity problem seemingly not fully resolved. And storming parliament when no politicians are there seems a bit timid as the building is entirely open to the public, anyway – although XR UK did note on its Facebook page that:

This is Extinction Rebellion’s opening act for our September plans. Join us at 10am, Marble Arch, on 10th September to continue to demand a Citizens’ Assembly.

But overall, it’s good to see XR UK taking some actual direct action – as opposed to other organisation’s usual preference for state-sanctioned A-to-B marches. Let’s hope it builds into something bigger, more radical, and diverse this September.