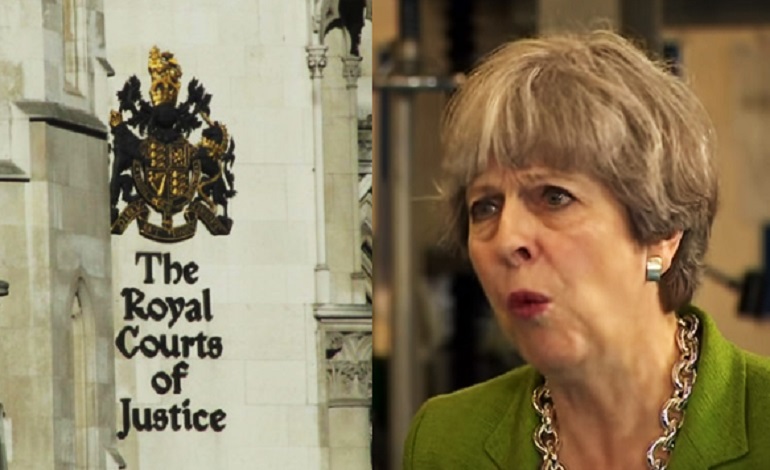 Theresa May’s government is facing court action, amid allegations that it has committed “ongoing failures” in its obligations under international law. But it’s not the first time the Tories have been in the dock over this issue either.

Plan B is a charity which supports legal action to tackle climate change. It states its aims as:

ensuring those responsible for greenhouse gas emissions bear the costs of loss and damage, we will increase the incentives for investment in clean technologies, harnessing market forces towards a better future for us all.

And now, Plan B has turned its attention to the UK government. The group has previously warned the government that it believes it is breaching its obligations under the Climate Change Act 2008, and specifically its carbon target for 2050. But it has ignored Plan B’s requests. So now, the charity has begun [doc] official proceedings for a judicial review of the government’s actions.

Plan B says that the government has broken [doc] the law because it has failed to “to review and revise” the 2050 target “in light of developments in climate science and international law”. It specifically says that the government has allowed [doc p1] an “ongoing failure” to “revise” the 2050 target. And Plan B says this failure is:

failure of the Government to revise the UK carbon target to keep pace with the enhanced ambition of the Paris Agreement the government has done so much to promote. If the UK, as a relatively wealthy, developed nation, an architect of the Paris Agreement and a self-proclaimed climate leader, fails to meet its international obligations under the Agreement, its leadership claim is false and its good influence on others is lost.

Bindmans specifically noted [doc, p14] the government’s Committee on Climate Change’s analysis of the Paris Agreement and its implications for the 2050 target. It stated that the agreement’s aim, “to limit warming to well below 2°C and to pursue efforts to limit it to 1.5°C” went further than the current 2050 target. The Committee also said [doc, p14/15] that:

While relatively ambitious, the UK’s current emissions targets are not aimed at limiting global temperature to as low a level as in the [Paris] Agreement, nor do they stretch as far into the future.

It also noted that delayed action would only substantially increase the overall challenge of reducing global warming. But the Committee ended [doc, p15] by advising the government:

Do not set new UK emissions targets now. The UK already has stretching targets to reduce greenhouse gas emissions. Achieving them will be a positive contribution to global climate action.

It is this inaction which is central to Plan B’s case. So, Bindmans detailed numerous grounds on which it has based its legal argument. These include that:

But Plan B says [doc, p35] it will halt action towards a judicial review if the government, by October:

review[s] the 2050 Target to determine an appropriate amended 2050 Target taking into account the relevant principles… and setting clear reasons for any decision reached as a result of that review.

That’s like a pilot saying, as his plane careers towards the mountainside, that he’s not quite ready to change trajectory because he needs more time to study his map. It’s not a reasonable or rational response to the situation.

But the government disagrees. A spokesperson for the Department for Business, Energy and Industrial Strategy told The Canary:

The UK is a global leader in tackling climate change – we were the first country to introduce domestic legally binding emission reduction targets and played a vital role in securing the historic Paris Agreement. Since 1990, we have cut emissions by more than 40 per cent while growing our economy by two thirds. This means we lead the G7 nations on clean growth.

The forthcoming Clean Growth Strategy will be an ambitious and robust plan, which will outline how we will reduce emissions further in line with the Climate Change Act and build on the economic opportunities across the country.

Writing’s on the wall

As Naomi Klein said [p335] in her book This Changes Everything:

For decades, the environmental movement spoke the borrowed language of risk assessment, diligently working with partners in business and government to balance dangerous levels of pollution against the need for profit and economic growth. These assumptions about acceptable levels of risk were taken so deeply for granted that they formed the basis of the official climate change discussion. Action necessary to save humanity from the very real risk of climate chaos was coolly balanced against the risk such action would pose to GDPs, as if economic growth still has a meaning on a planet convulsing in serial disasters.

And while the environmental movement has moved on from this school of thought, the UK government clearly has not. Because if it had, it would accept Plan B’s argument that it is failing in its climate change obligations. And it would take urgent steps to address the situation.

But it’s not, and so Plan B sees little option left but to take the legal route. As Klein proclaimed in her latest book: “No Is Not Enough”. And for Plan B and campaigners, it no longer is.