A prominent whistleblower has been banned from travelling to Canada. And there are implications for all of us [OPINION] - Canary

Award-winning whistleblower and political activist Chelsea Manning has received a banning order from the Canadian police. Manning is set to appeal against the ban. Because not only does the order appear faulty, but it is also a direct challenge to free speech.

In 2013, Manning was convicted of violating America’s Espionage Act – along with other offences – and sentenced to 35 years in prison. But in January 2017, after a series of global campaigns, US President Barack Obama commuted her sentence.

The order was issued by the police to the Minister of Immigration, Refugees and Citizenship Canada, after Manning tried to enter Canada on 22 September 2017: 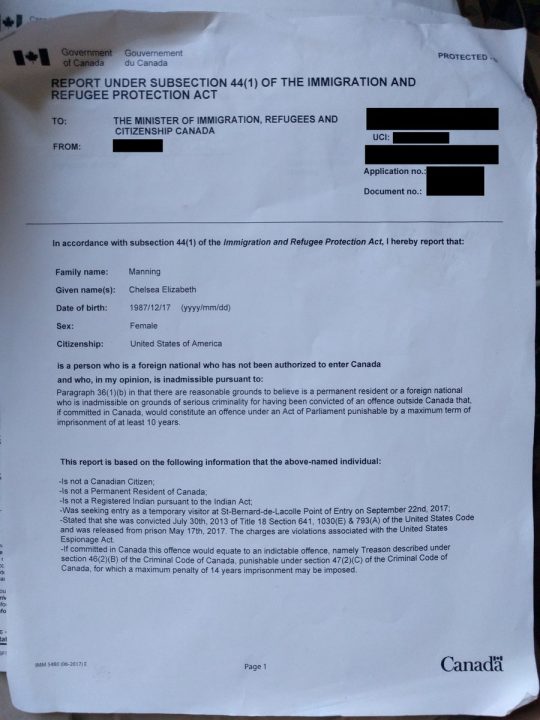 The order, which the author caveats with “in my opinion”, goes on to say that the violations of the Espionage Act that Manning was convicted of in the US is equivalent to the crime of Treason in Canada. The Guardian reports:

Manning’s support team have responded with astonishment to the suggestion by Canadian authorities that her prosecution under the US Espionage Act was equivalent to treason under Canadian law.

They stressed that the Espionage Act was unprecedented around the world as it allows no margin for whistleblowers to argue that the disclosures they made were in the public interest.

Moreover, the Canadian Criminal Code [with highlighted sections, via Manning] states in section 2 (b):

[Every one commits treason who, in Canada] without lawful authority, communicates or makes available to an agent of a state other than Canada, military or scientific information or any sketch, plan, model, article, note or document of a military or scientific character that he knows or ought to know may be used by that state for a purpose prejudicial to the safety or defence of Canada.

But Manning did not directly provide material to an “agent of the state”, but to WikiLeaks, a publisher and media conduit. CIA director Mike Pompeo has previously described WikiLeaks as a “non-state” entity.

Nor are any of the media that went on to publish that material “agents of a state”. For example, articles based on Manning’s leaks appeared in The Guardian, The New York Times, Der Spiegel, The Bureau of Investigative Journalism and the BBC.

Indeed, in an article published by The Guardian, Manning observed:

…when I was court-martialled for providing government documents and information that I felt were in the public interest to a media organization, the government charged me with “aiding the enemy” – a treason-related offense under the US constitution and military justice system that even civilians may be charged with. During one of my pre-trial hearings in January 2013, the military judge in my case, US Army Colonel Denise Lind, asked the government lawyers: ‘Does it make any difference – if we substituted Wikileaks for The New York Times: would the government still be charging this case in the manner that it has and proceeding as you’re doing?’ An assistant trial counsel for the government answered a straightforward ‘Yes, Ma’am’…

The New York Times was not prosecuted and Manning was. Manning added:

The government further argued that there was no distinction to be made between any media organizations that provided information to the public, if the government felt that would ‘aid’ the enemy: whether such information was published by a small-time blog, a controversial website like Wikileaks, a national newspaper like the Washington Post, or an international one like the Guardian, to the government, they can all be ‘aiding the enemy’.

Indeed, Manning was acquitted of ‘aiding the enemy [state]’ charge.

And on a technical point, the banning order fails to mention that Manning is a dual US-UK citizen, boasting an extensive Welsh-Irish family: 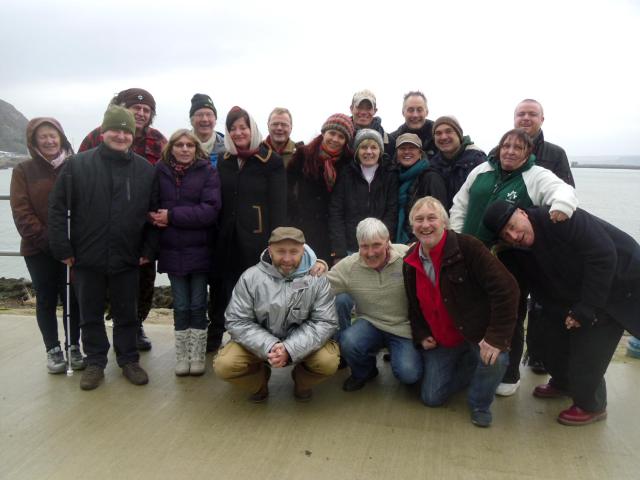 Unacceptable to see @xychelsea unable to enter Canada. The government must fix this and allow her in our country. #cdnpoli https://t.co/5qp1ou82pF

And Manning stated she will appeal against the order:

the law cited by @CitImmCanada is *not* similiar at all https://t.co/RNtjKbclxk

The ban by Canada came only days after Harvard University rescinded an invitation to be visiting fellow to Manning. This was as a result of pressure by a serving and a former director of the CIA.

At an anti-fascist rally in Berkeley, Manning was dismissive of Harvard’s moves:

Since her release from prison, Manning has been a relentless campaigner for human rights and LGBTQ+ rights and refugees. She is also the recipient of several awards. These include The Guardian’s Person of the Year and the prestigious Sean MacBride Peace Prize (though Manning made it clear she is not a pacifist).

Instead of banning the award-winning activist, Canada should welcome her. As political activism – as well as leaking information about war crimes – is not a threat to democracy but an asset.