London's 'hidden homeless' outnumber those on the streets by 13 to 1. And LGBTQ+ people are being hit hardest. - Canary 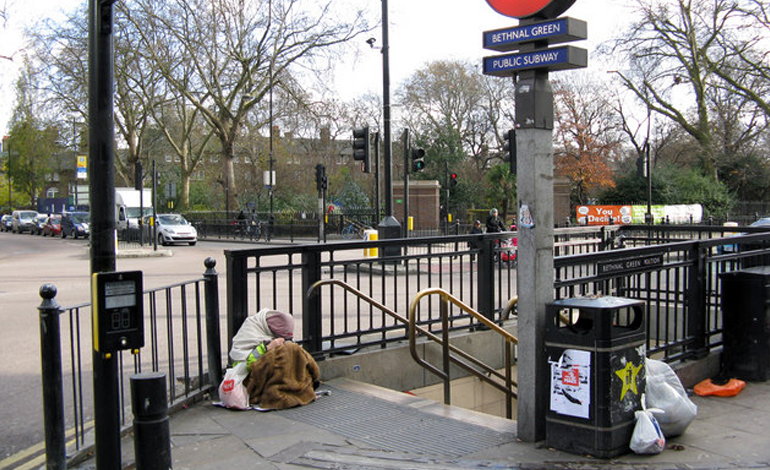 The London Assembly has reported there are “thirteen times more hidden homeless” in the capital city than people sleeping on the streets. This category includes people without a home but who don’t show up in official data, such as those living with friends and family or residing in a squat.

As a result, accurate figures are hard to confirm. But the London Assembly’s findings reflect a national trend of increasing homelessness – especially for young LGBTQ+ people.

Published on 27 September, the Hidden homelessness in London report claims that up to 12,500 people may be hidden homeless every night in the city. This is 13 times greater than the number sleeping on the streets. Most affected [pdf p4] are people who are:

single and without dependent children, and therefore not defined as being in ‘priority need’. Most commonly this affects young people…

And even within this category, there are clear sub-grouping trends. Young LGBTQ+ people comprise [pdf p12] a high rate of hidden homeless, with “indications that [they make] up a quarter of youth homelessness”. Many of these people say [pdf p4] their sexuality is central to being forced out of home:

Two thirds of LGBT homeless youth reported parental rejection as one of the top three reasons for their homelessness. This issue is particularly prevalent among the transgender community, according to evidence we received.

‘Relationship breakdown’ is cited [pdf p3] as one of two major causes leading to homelessness. The other is ending of an Assured Shorthold Tenancy, the standard contract in the private rental sector, which housing charity Crisis has previously slammed. Familial breakdown includes everything from parental rejection through to emotional and physical violence. And this particularly affects young LGBTQ+ people.

The LGBT Youth Homelessness report by the Albert Keller Trust, one of the sources used by the London Assembly, shows [pdf p6] the extent to which abuse and violence is a primary cause for people fleeing their homes: 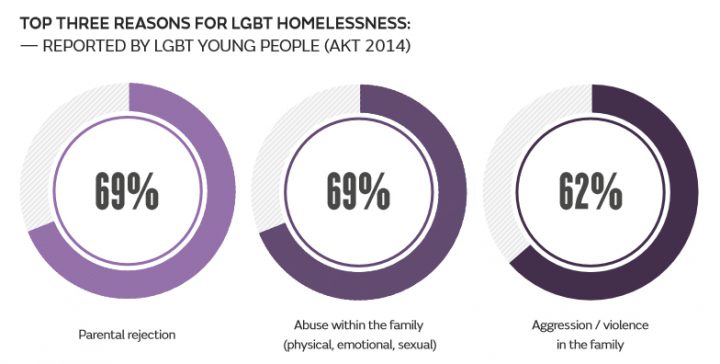 The London Assembly’s report comes in the wake of recent condemnation by the National Audit Office. On 13 September it pointed the finger at government welfare reforms as a leading cause of homelessness. But if those statistics on homelessness alone weren’t shocking enough, Hidden homelessness in London also brings to the surface the deeply embedded homophobia and transphobia in our culture.

In a video accompanying the report’s release, CEO of Stonewall Bob Green remarks:

Stonewall Housing has been running since 1983… but the issues are still present today in 2017 because even though we now have equal marriage, we now have the Equality Act, actually it’s much harder to change people’s minds and attitudes.

The impending Homelessness Reduction Act is focussed on as an important step forwards in tackling the issue. It will replace the use of ‘priority needs’ in providing housing and require local authorities to aid all eligible applicants.

But it’s clear this won’t challenge the root of the problem. Social attitudes towards sexuality and gender identity, though changing, are still forcing thousands of young LGBTQ+ people out of their homes every night. And that’s something we must all fight against.

– Contact Stonewall Housing if you or someone you know is affected by these issues.

– Support the work of Streets Kitchen, a food project for and by people affected by homelessness of all descriptions.