US war planes fly close to North Korea. But the media is hiding the full story. [IMAGE] - Canary 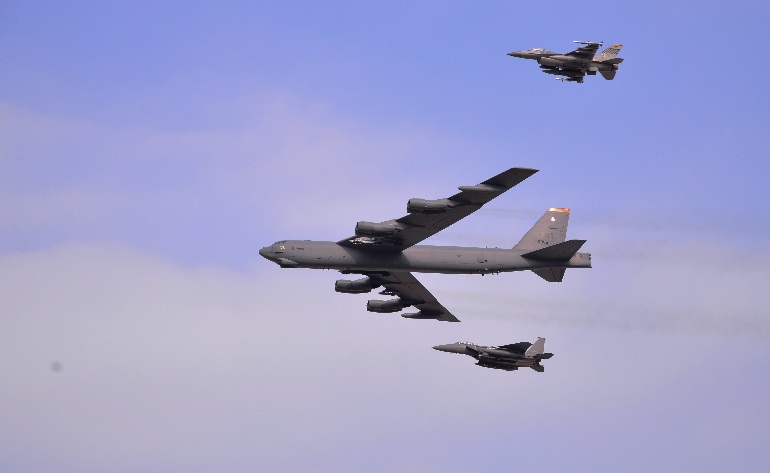 Donald Trump recently said the US might soon have “no choice but to totally destroy North Korea”. And North Korean Foreign Minister Ri Yong Ho believes Trump has “declared war” on his country. But as US war planes posture, the media is still failing to tell us the full story.

War planes and the threat of conflict

US bombers and fighter escorts recently flew through international airspace to the east of North Korea. The Pentagon said this was the farthest to the north that these planes had flown so far this century. In this context, media outlets have been posting headlines like:

And as former Harvard University professor Ash Carter has said regarding another possible US war in North Korea:

Also, because the US has around 6,800 nuclear weapons and North Korea reportedly has 10, there is the prospect of the conflict becoming nuclear.

But in this context, the media is still failing to tell the whole story.

It’s not black and white

Media Lens has previously accused outlets like the BBC of ‘massively hyping’ the North Korean threat to the US while ignoring America’s own history of “provocation and brinkmanship” (along with coups and invasions). It said in particular:

Current news coverage about North Korea omits significant history. The fact that the United States devastated the Korean peninsula in the 1950s is regularly buried.

The US reportedly committed numerous war crimes during the Korean War (1950-1953). Air Force General Curtis LeMay, for example, wrote: “we killed off over a million civilians and drove several million more from their homes”.

But it’s not just that aspect of history that tends to be absent from mainstream media coverage of US-North Korean tensions. It’s also South Korea’s history.

On 26 September, the BBC published a piece titled: Nine charts which tell you all you need to know about North Korea. And the first image in the article is this one: 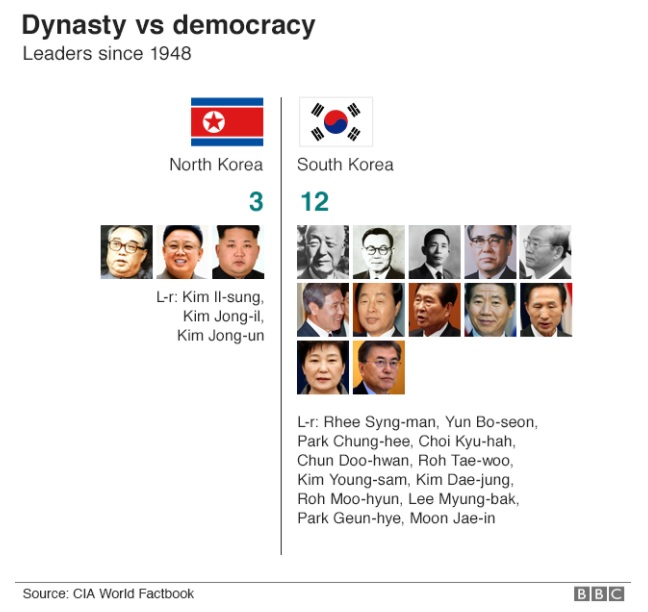 To be fair, this image helps to highlight North Korea’s monarchical post-war political model effectively. But it also does the reader a disservice by giving South Korea’s history the title “democracy”. Because Park Chung-hee – who led South Korea between 1961 and 1979 – was a dictator. And as The Diplomat writes, Park oversaw:

a severe crackdown on society: protesters, activists, and dissidents were often jailed and tortured; many died in captivity or during confrontations with riot police or the military.

While cracking down on political foes, critics and nay-sayers, Park organized the tycoons totally behind him…

As with other so-called ‘developmental dictators‘, like the Republic of China’s (Taiwan) Chiang Kai-shek and Singapore’s Lee Kuan Yew, Park formed an important part of US plans to ‘contain communism’ in East Asia. He and others received investment, aid and access to US and Japanese markets, and in turn kept wages low and restricted workers’ rights.

Name-calling helps no one

Intentionally or not, media outlets all too often turn the US-North Korea standoff into a conflict between good and evil. And as former UK diplomat Simon Gass (the man who negotiated the Iran nuclear deal) recently said, that just plays into the hands of people like Donald Trump:

you sometimes get political leaders who because they have had very little contact with a country – and sometimes none – have formed a very clear and very erroneous two-dimensional understanding of what motivates the other side.

Gass suggested that reaching a more nuanced position was the key to finding a resolution to tensions. So “name-calling and exchanges of ritual insults by the main two parties to the debate”, he said, was not helpful at all.

But to find a peaceful solution, it’s not just down to the politicians. It’s also down to the media – the people whose job it is to hold them to account.