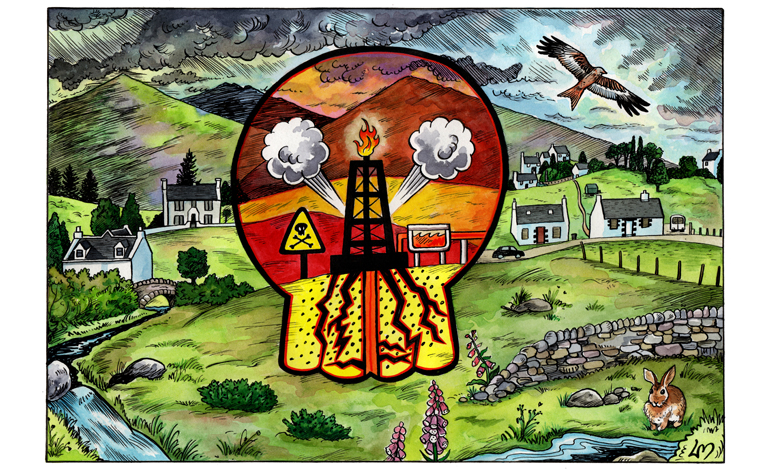 Hydraulic fracturing (fracking) has been banned in Scotland. On 3 October, Scottish Energy Minister Paul Wheelhouse announced that “fracking cannot and will not take place in Scotland”. A moratorium on the extraction process introduced in January 2015 will “remain in place indefinitely”. Meanwhile, anti-fracking activists in England continue to face police violence.

Wheelhouse announced a permanent moratorium following the Talking “Fracking” public consultation, which received more than 60,000 responses. Running from 31 January to 31 May 2017, results showed over 99% of responses opposing fracking.

More than two thirds of the 8,000 ‘substantive’ replies, which included postcodes, came from residents in areas likely to be explored for sites.

The Energy Minister also voiced concerns about lack of evidence on how the process affects human health, while highlighting the difficulty it creates for Scotland meeting climate change targets.

Communities across Scotland, particularly in areas where developments could take place, have yet to be convinced that there is a strong enough case of national economic importance when balanced against the risk of disruption they anticipate on matters such as transport, risk of pollution and impacts on our general health and wellbeing.

As a result, fracking is now banned in Scotland. The full decision will be released in December in the Scottish Energy Strategy document.

In England, meanwhile, there are currently two sites in the early stages of fracking. Preston New Road (PNR), near Blackpool, has seen vibrant protests since January 2017. Kirby Misperton (KM8) has seen active resistance to its site since September 2017.

Both locations have seen police violence against peaceful protesters. The Network for Police Monitoring (Netpol) published a film on “aggressive and inconsistent tactics” used by police at PNR. Police officers were even caught laughing and joking about their violence.

At KM8, protests have grown increasingly volatile with 29 arrests at the site since 19 September. A video published on 21 September shows rough manhandling by police of a protester as she tells them she has “neck injuries, shoulder injuries and a crushed torso”:

The decision to ban fracking in Scotland has been made based on scientific and economic data as well as the overwhelming consensus of the people most likely to be affected: local residents.

Yet the Tory government in Westminster is doing all it can to push fracking forwards in England. In October 2016, it sided with drilling company Cuadrilla by overruling Lancashire County Council’s rejection of a fracking site at PNR.

This decision by the Scottish government is an important step in freeing ourselves from destructive fossil fuels. When will Westminster follow?

– Check out Frack Off for nationwide information about fracking and resistance.

– Read more about fracking at The Canary.