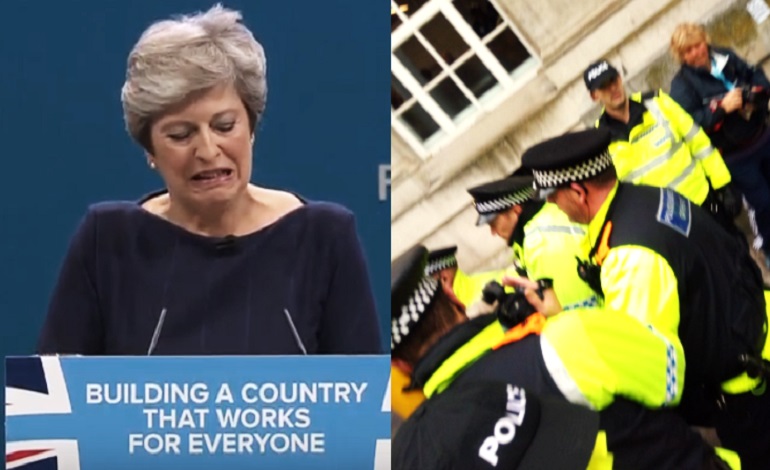 While Theresa May juggled falling ‘F’s and P45s at her conference speech on Wednesday 4 October, angry scenes were erupting outside. And they’re scenes the Conservatives would probably rather no one saw at all.

As part of the People’s Assembly’s Take Back Manchester festival, Disabled People Against Cuts (DPAC) organised a ‘Wall of Sound’ outside the conference venue. The idea behind the protest was to make as much noise as possible to raise awareness about life for disabled people under a Conservative government.

The police presence at the demo was significant: 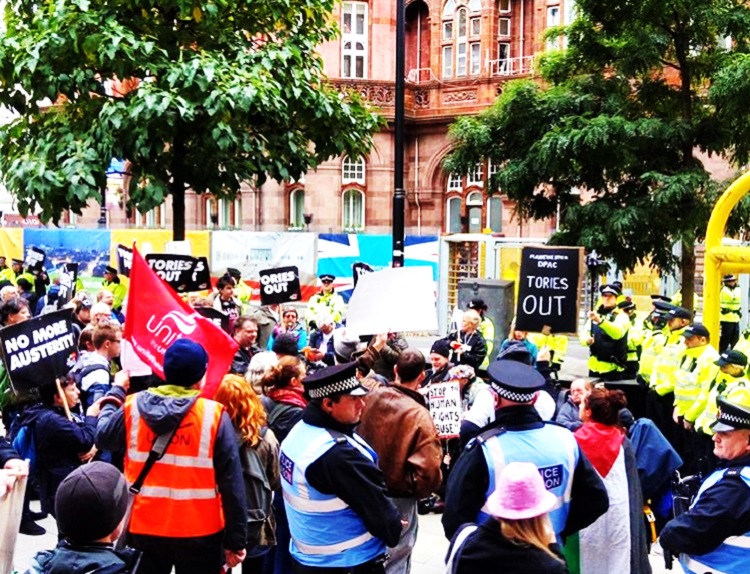 But some protesters made their feelings clear about Conservative austerity, which has led to cuts to people’s benefits: 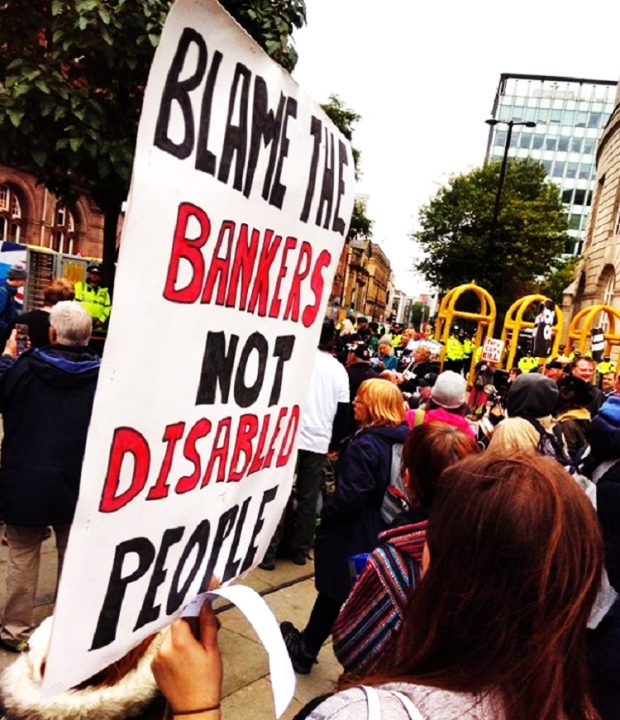 And there were claims of excessive police force:

Wednesday’s demo came after two disabled people were arrested on Sunday 1 October at the main Take Back Manchester protest. Both were taking part in a blockade of Manchester’s tram system when the arrests took place. Greater Manchester Police (GMP) told The Canary that one of the people arrested in connection with the tram line protest “has been charged with causing public nuisance”; and that “the other woman involved was given a caution”.

But there were complaints about GMP conduct across the six-day festival. Linda Burnip from DPAC told The Canary:

The Tories were, as usual, hidden away behind metal barricades and protected by large numbers of snipers on the roof of the conference building.

The street policing was also extremely aggressive. And disabled protesters, legally protesting for their human rights, were swamped by excessive numbers of officers. One was physically and brutally manhandled; being lifted in their wheelchair into a non-accessible police van putting them at risk of serious injury. A veteran campaigner in his 80s suffered severe bruising to his arms. Both incidents are shocking but will only serve to make disabled campaigners more determined than ever to make their voices heard.

In a statement, the GMP told The Canary:

Our officers tried everything possible to reason with protestors who were blocking tram lines out of Manchester City Centre causing major disruption across the network and having a significant impact on the travelling public across Greater Manchester. A number of the protestors voluntarily moved but others remained with no regard for the impact their actions were having on others or the potentially dangerous situation they were creating on a live tram line.

With the right to protest also comes a high degree of personal responsibility. Our officers had no option but to arrest these individuals and used reasonable force to move them in a safe manner for everyone involved.

But disabled people clearly feel forced to protest for their rights. And many believe they have been subjected to what TV show The Last Leg described as a “genocide” by the Conservative Party.

Since 2010, Conservative-led governments have cut:

Also, as The Canary has been documenting, in recent weeks, cross-party politicians and campaigners have been calling for the rollout of Universal Credit to be stopped. This is because the change in benefit is pushing people into poverty and driving them to food banks. And life for disabled people in the UK has become so bad that the UN has had to intervene.

As The Canary previously reported, the UN Committee on the Rights of Persons with Disabilities (UNCRPD) met in August in Geneva, Switzerland. It assessed how well the UK government is sticking to its obligations under the UN Convention on the Rights of Disabled People. The UK government agreed to these obligations in 2009. And the UNCRPD was unequivocal in its opinion on how disabled people are treated by the Conservative government. Its Chair, Theresia Degener, said in a statement seen by The Canary:

The UNCRPD released its findings on 31 August; you can read The Canary‘s full analysis here. It said the government is failing disabled people in over 70 areas – from basic human rights, to not tackling discrimination, to the damaging impact of austerity and welfare cuts. It gave over 90 recommendations, the most critical in its 10-year history.

But we’ve been here before. This is now the fourth report in 14 months by the UN into the Conservative government. All of them condemned the Conservative government’s treatment of disabled people, saying it had committed “grave” and “systematic” violations of their human rights. And it’s been just over a year since disabled people blocked Westminster Bridge, to much media attention, to highlight what the UN has now reported on. But still, nothing has changed.

As The Canary noted before:

It is quickly becoming unclear as to what it will take to give disabled people the rights and recognition in the UK they deserve. But something has to change. And it has to change quickly.

Unsurprisingly, there was little at the Conservative conference to give disabled people hope. So it seems that all that’s left for them is to continue with protests like Take Back Manchester. Which, in 21st-century Britain, should be wholly unnecessary.

– You can also write to your MP, asking them to support the UNCRPD findings.

Featured image via YouTube/Screengrab and additional image via Chrissy Brand