Have you had an accident involving a pheasant that wasn't your fault? - Canary 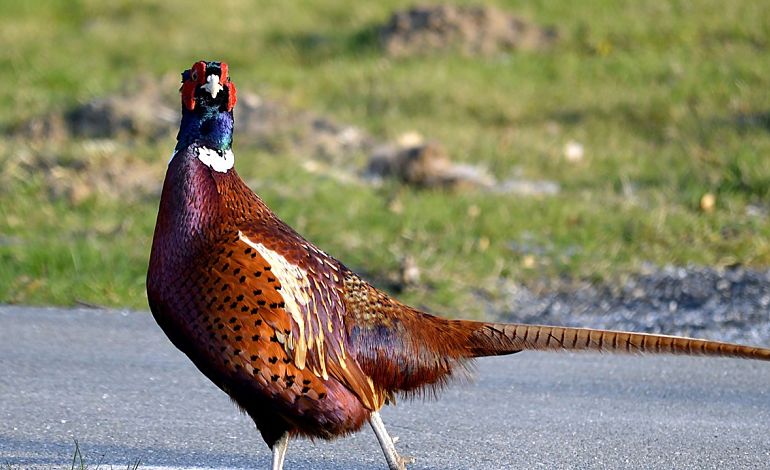 October is a tough time to be a pheasant. The shooting season, which runs from 1 October to 1 February, has begun. And birds that dodge the guns are more likely to get run over than at any other time of year.

All over the roads

Millions of pheasants die on the roads every year. The most conservative estimates put the figure at over two million. Some experts think it could be as much as “a third of all pheasants”, which would be well over 10 million. These numbers don’t include the times when birds are only slightly injured. Or the ones that escape when a driver or rider swerves to avoid them. Pheasant strikes can be deadly.

A report released on 4 October suggests that pheasants are the most likely bird to die on UK roads. They account for nearly 40% of all carcasses recorded by the public. The researchers also found that there are two times of year that are far worse for pheasants. This contrasts with findings from 50 years earlier, when road deaths were spread more evenly throughout the year.

The difference now is due to the birds mostly being artificially reared and then released for the start of the shooting season. Where previously pheasants bred in semi-natural conditions, most now grow up with no parents to teach them about hazards. Also, as the report points out, pheasants have “relatively small brains”. Suddenly free to roam after their confined early life, pheasants have next to no skills for dealing with roads, which they’re drawn to because of an instinctive attraction to “linear features”. But pheasants who don’t get run over straight out of the box and then manage to survive the shooting season still face a tough challenge. At the end of the season, many estates stop providing food for the birds, so they have to forage more widely. So road deaths spike in the spring as well as the autumn.

Pheasants can cause severe damage to vehicles because they’re not small birds. A male weighs around 1.4kg, females about 1kg. No one has fully studied the impact of pheasants on the wider environment but again weight is significant. The released population of pheasants each year has a mass in the order of 40,000 tonnes. This compares to the entire regular UK bird population mass of about 25,000 tonnes (which includes surviving pheasants gone wild).

Releasing non-native species is illegal and yet around 35 million pheasants, as well as millions of red-legged partridge, get pumped into the UK ecosystem each year. Over five million young pheasants come from overseas. The pheasant also has a curiously flexible legal status which means you won’t have anyone to sue if one takes out your car radiator, because it’s a wild bird. Although it’s livestock when the shoot owner is applying for planning permission or filling in a tax return. Yet not subject to minimum farm welfare standards because it’s “intended for use in… sporting events or activities”. They’re wild during the shooting season, so you can legally shoot them. But they’re livestock at the end of the season, meaning you can legally capture them for breeding.

So if you’ve had an accident involving a pheasant, and it wasn’t your fault, don’t call anybody. Because it wasn’t their fault either.

At least not legally.

– Read more from The Canary on Game Shooting.