A king and his army are trying to crush democracy. In Europe. In the 21st century. [TWEETS] - The Canary 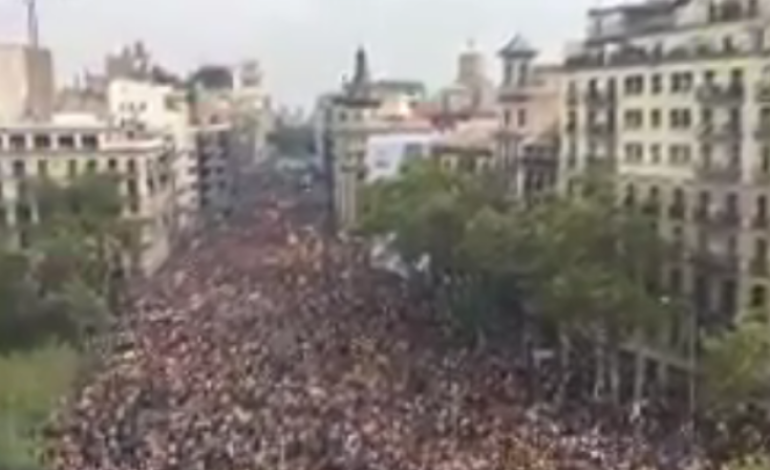 On 1 October, a Catalonian referendum for independence took place in Spain. But Madrid responded with violence. And there is even a report [Spanish] that the Spanish government has deployed the army to Catalonia. Although you would think, given the response of Spain’s monarch King Felipe VI the day after the referendum, that it was Catalans who had crossed the line.

Felipe’s speech was notable not just for what he said, but what he didn’t say. He began by saying:

We are living through very grave moments for our democratic life…

But that was not a reference to the use of force by the Guardia Civil (the paramilitary national police) to thwart Catalonia’s democratic process by seizing ballot papers and ballot boxes. Indeed, not once did he condemn that violence, which reportedly saw around 761 men, women and children injured by the Guardia Civil.

Indeed, there was much violence, but also courage:

Nor did the king reference the pro-referendum websites taken down on the orders of the Spanish state.

Nor did he mention how people had to be protected from state sanctioned violence by Catalan firefighters:

The Barcelona fire fighters showed a lot of courage and pride today! Fair fucks to them! #CatalanReferendum pic.twitter.com/90u0kZOE5n

But there was also, apparently, an implicit threat in the king’s speech:

faced with this situation of extreme gravity…, it is the responsibility of the legitimate powers of the state to ensure constitutional order and the normal functioning of our institutions, the validity of the state of law and self-government in Catalonia, based on the Constitution and its Statute of Autonomy.

This might explain why the Spanish army is reportedly being sent [Spanish] to Catalonia.

Meanwhile, on 3 October, Catalonia came to a standstill as a general strike, supported by nearly all the union federations, took hold. And possibly over a million Catalans took to the streets in Barcelona and other cities to affirm the independence referendum result.

On the first day of the general strike, Barcelona had probably its largest rally ever, with thousands occupying the streets in all directions:

In Catalonia, democracy is not just about votes or government. It’s also about consensus between people on the street, in neighbourhoods, workplaces, and community centres. On the eve of the general strike, for example, people met to organise what would happen:

As journalist Paul Mason, who was present, observed:

What I saw in El Clot, and in the other districts, corresponds so closely to the original Athenian form of democracy that the parallel is worth exploring… In Catalonia on Sunday I saw something like a true demotic participation – and that should make the world, and the EU, think twice before dismissing the whole thing as a nationalist stunt.

The official count from the Catalan government was:

The turnout would have likely been greater had the Guardia Civil not acted in the way it did.

On the evening of the referendum, Catalan president Carles Puigdemont issued a statement. He made it clear what the next stage in the referendum process would be:

The government that I preside over will present today’s results to the Parliament of Catalonia, where the sovereignty of our people resides, so it can proceed in accordance with the Referendum law.

And unlike King Felipe’s speech, Puigdemont’s statement made direct reference to the violence and who was behind it, speaking of:

the unjustified, abusive and severe police violence committed by the Spanish government… [and] the brutal repression unleashed by the government of Prime Minister Mariano Rajoy…

Later, Puigdemont clarified that the independence declaration would be issued either at the weekend, or early the following week.

What happens next is anyone’s guess. But the fact that the Spanish government is reportedly sending in the army is ominous. And Europe needs to speak up for democracy before it’s too late.