Today the ghost of fascism stalked Catalonia. But it did not count on the response [TWEETS] - Canary 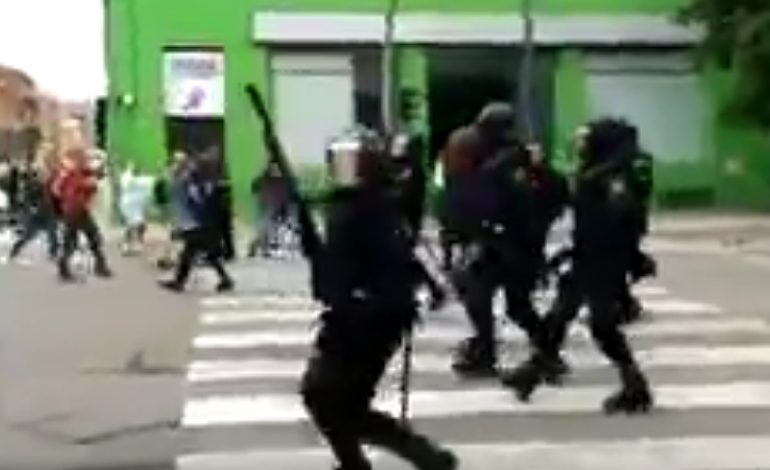 On 1 October 2017, the ghost of Francisco Franco’s fascism descended on Catalonia. Officers with the Guardia Civil, Spain’s paramilitary police, attacked civilians who merely wished to participate in a referendum on independence. They included elderly people and children, who had occupied polling stations to ensure the vote went ahead.

But it didn’t stop there, with riot police firing on voters with rubber bullets and baton rounds.

It was late morning when reports first came in that police were firing rubber bullets at people in the streets, sustaining injuries. Then came this dramatic picture from Solidaridad Obrera, the news bulletin of the anarchist union the CNT (National Confederation of Labour):

Another eye witness tweeted pictures of rubber bullets found on the ground:

But this was not one lone cop. Video evidence emerged of several Guardia Civil officers firing at citizens:

This assault took place at a polling station at Sant Julià and people of all ages were physically manhandled by the paramilitary police:

And at the Ramon Llull school, used at a polling station:

The police violence was indiscriminate, with victims including elderly people:

But not all went to plan. Catalan firefighters bravely intervened to prevent more violence:

At the time of writing, the Catalonian government reported that 761 people had been injured.

The Guardia Civil raided the offices of three Catalan government ministries: Economy, Governance, and Social Affairs. Several Catalan government buildings were also raided, including Finance and the Telecommunications and IT headquarters.

The Guardia Civil also served notice [Spanish] to the staff of El Nacional to desist from publishing announcements related to the referendum. Other media were similarly [Spanish] served notices. Domains of official referendum sites were shut down too. But WikiLeaks restored the main referendum site that provided information as well as registration details.

Then on 20 September, dock workers from the CNT tracked ships where up to 16,000 riot police were to be accommodated. And ‘hacked’ police audio conversations suggested that officers were just itching [Spanish] for a fight.

The ghost of fascism

On referendum day, Catalans showed remarkable restraint in the face of the thuggish violence of the Guardia Civil. The latter have done their utmost to try and sabotage the vote and it remains to be seen whether that vote will be declared valid.

For the ghost of fascism is still to be seen. But for how long? Indeed, it’s reported that defence committees, in the style of the 1936 Spanish Revolution, are organised and waiting. But whatever the outcome of the independence referendum, it’s clear, given the police violence, that Madrid has lost.

And it is the Catalans who have won.