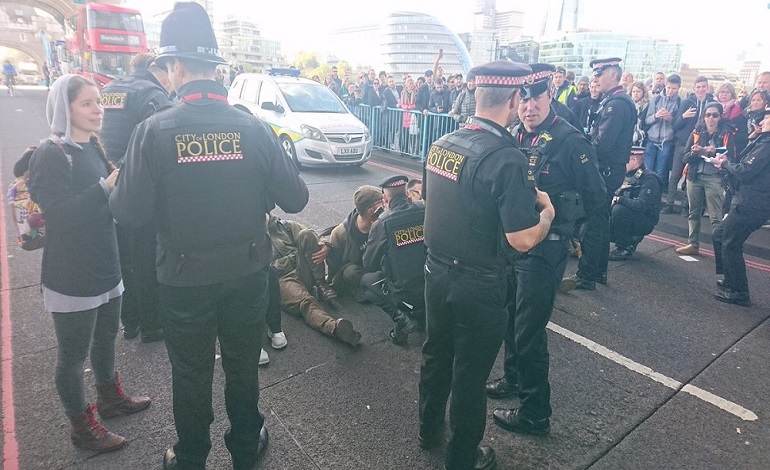 People are taking drastic action to highlight a public health crisis which kills 40,000 people a year. Because they believe the situation is getting so bad, they have said they are willing to go to jail to draw attention to it.

Stop Killing Londoners is a campaign group raising awareness of air pollution. It is not politically affiliated and aims to represent all demographics of Londoners. The group believes the most effective way of highlighting the issue of air pollution is through civil disobedience. And on Monday 30 October, the group began a week of action with disobedience as its central theme.

At around 12pm on 30 October, campaigners began a sit-down protest on Tower Bridge in central London. They unfurled banners, bringing traffic in both directions to a standstill:

The event lasted for around an hour, with Stop Killing Londoners telling The Canary it “caused gridlock across the City of London”. Police were quickly on the scene to try and end the sit down:

Update – blockade still in progress and has now been going for almost an hour. Police reluctant to make arrests but these now imminent pic.twitter.com/JuGm2XkYZo

Police eventually moved the campaigners. Seven people have been arrested and charged for obstructing the highway.

As The Canary previously reported, illegal levels of nitrogen dioxide in the air, attributed in the main to diesel emissions, led to 40,000 early deaths in the UK during the last year alone. This means toxic air killed twice as many people last year as car crashes, breast cancer, and murder combined. It is roughly equal to the number of people who die each year from a stroke.

In London, nearly 10,000 people die each year as a result of air pollution. Researchers from King’s College London said there were 5,900 deaths in London in 2010 associated with long-term exposure to nitrogen dioxide (NO2). And 3,500 deaths were as a result of exposure to particulate matter called PM2.5.

The Stop Killing Londoners week of action will continue, with peaceful civil disobedience planned around the capital. The group told The Canary:

We have pledged to carry on with an escalation of disruption this week; understanding that for some of them this could mean they would eventually face jail.

The group has written to both the government and London Mayor Sadiq Khan, urging them to take action. You can read the group’s open letter here. But Stop Killing Londoners said:

Our members will continue their peaceful civil disobedience until they receive a satisfactory response.

It’s important to remember that air pollution is not just a London issue: there were 169 places in the UK which breached legal air pollution levels in 2016. It is a rapidly growing, nationwide crisis that the government merely shrugs its shoulders over. It seems that groups like Stop Killing Londoners plan to keep applying pressure on the government, until it acknowledges a situation that is literally killing people every day.