Don't be sad about 'Blue Monday'. It was created so Rupert Murdoch could sell holidays. [TWEETS] - Canary 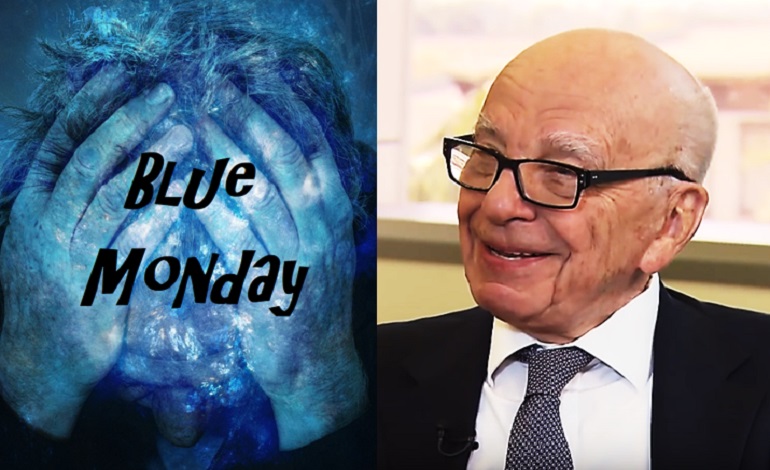 15 January 2018 is officially this year’s ‘Blue Monday’. And while many people mark the occasion by sharing their stories of mental health and depression, it’s worth remembering why the day came into existence: because Rupert Murdoch wanted to sell package holidays.

How does it feel, to treat me like you do?

Blue Monday was created for the Murdoch-part-owned Sky Travel TV channel in 2004. As Ben Goldacre documented for The Guardian in 2006, Sky Travel‘s PR firm hired the services of Dr Cliff Arnall to calculate the most miserable day of the year. As a pitch by Porter Novelli, the agency that designed the Blue Monday campaign, reportedly said:

Blue Monday – January Blues Day is Officially Announced: The 26th January is the most depressing day in the calendar for the majority of Brits as measured by a simple mathematical formula developed on behalf of Sky Travel.

By taking into account various factors such as avg temperature (C), days since last pay (P), days until next bank holiday (B), avg hours of daylight (D) and number of nights in during mth (N), we create a formula such as C(P+B) N+D. This formula allows us to work out the day with the highest ‘depression factor’ which you can then use as a focus for making things better, booking your holiday etc…

I thought I was mistaken…

Porter Novelli PR should have really put the “booking your holiday” bit in italicised capital letters, because Blue Monday was literally created for generating travel sales. As Arnall, who has since distanced himself from Blue Monday, said in 2010:

I was originally asked to come up with what I thought was the best day to book a summer holiday but when I started thinking about the motives for booking a holiday, reflecting on what thousands had told me during stress management or happiness workshops, there were these factors that pointed to the third Monday in January as being particularly depressing… but it is not particularly helpful to put that out there and say ‘there you are’… it is almost a self-fulfilling prophecy that it is the most depressing day.

The day is still acknowledged every year, with people using it to talk about depression. It is important to remember, though, that mental health issues are a year-round challenge for one in four of us. And as some social media users commented:

Every day has the potential to be a 'Blue Monday' which is what many pushing this particular day down our throats seem to forget!

BREAKING NEWS: THERE’S NO SUCH THING AS ‘BLUE MONDAY’.

It’s made up. It’s just another Monday. People get down, depressed & unwell on all days of the year.

Let’s concentrate on supporting each other & getting people the help they need.#BlueMonday

Sky Travel went off air in 2010. But Blue Monday, and what some describe as the “pseudoscience” behind it, still live on. And if 15 January this year seems somewhat miserable, don’t worry – Arnall may have the answer. The doctor was also responsible for naming the “Happiest” day of the year – a date in mid-June. This time, to help Wall’s ice cream sell more lollies.

– If you are concerned about someone’s mental health, or need support yourself, please contact the Samaritans on 116 123.