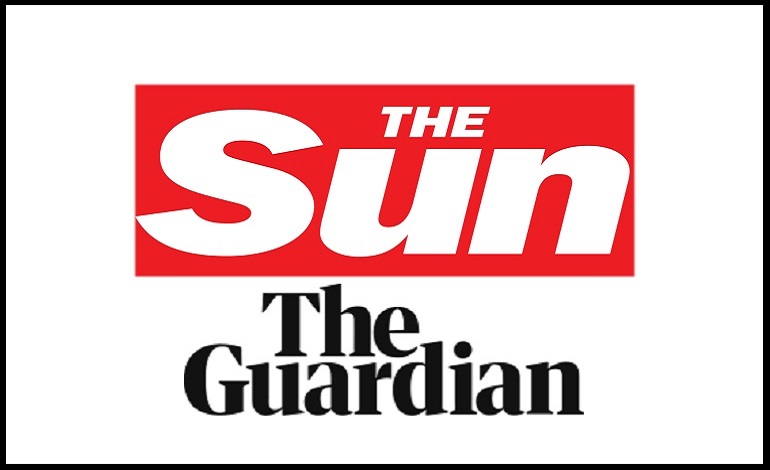 On Monday 15 January, The Guardian released the first edition of its newly formatted print newspaper. Billed as “tabloid” in style, it did not go unnoticed by The Sun, which took aim at the left-leaning publication in its editorial. But needless to say, the right-wing tabloid’s comments on The Guardian were somewhat laughable.

As BBC News reported, The Guardian‘s restyling from a broadsheet to a tabloid is a cost-cutting exercise. Its Editor Katharine Viner told BBC Radio 4 Today:

The main reason we did it is because it saves millions of pounds to print a tabloid like this.

We’re on track to lose less than £25m this year and we intend to break even next year which would be the first time since the 1980s that the paper has broken even.

For newspaper readers, all redesigns are guilty until proven innocent. The millions of people who buy a daily newspaper in Britain are creatures of habit… So anybody who undertakes a redesign of a newspaper is mad, brave, desperate – or some combination of all three…

The Sun sharpens its claws

The Sun was far more scathing in its analysis. Its editorial began by “warmly” welcoming The Guardian to the “tabloid club”: 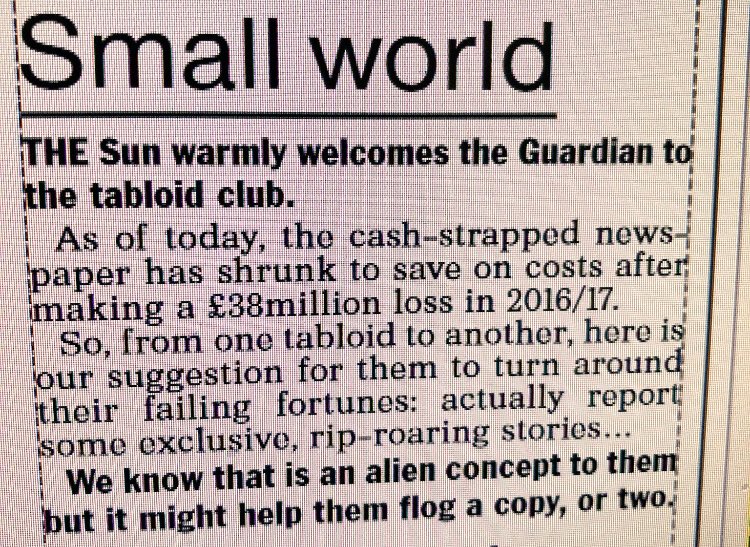 But journalists at The Guardian may have a few problems with The Sun‘s digs over financial losses and “exclusive” stories. Because the Rupert Murdoch-owned tabloid itself lost £24m in 2017 – something The Guardian reported on 10 January. Maybe The Sun was playing tit-for-tat in terms of gloating over The Guardian‘s financial black hole.

It is hard to imply, though, that The Guardian doesn’t report “exclusive, rip-roaring stories”, when it helped break both the Panama and Paradise Papers tax haven leaks, along with the revelations from Edward Snowden; stories which won it two Pulitzer Prizes.

As co-editor of The New Socialist, Tom Gann noted:

Obviously I've got my problems with Mason, and in lots of ways I think he's dangerous for a left politics here, but this does feel like a bizarre and reactionary decision from The Guardian. https://t.co/TU9eGa25Cm

Mason's been binned for the wrong reasons- when Corbynism is a significant political thing for the broadsheet ostensibly of the left to get rid of one of its few commentators sympathetic to the project it demonstrates something bad.

Tony Blair still looks like a war criminal in the 'new-look' @guardian: the paper that has battled so hard to rehabilitate him, constantly platforming his views and pushing him as some kind of elder statesman. pic.twitter.com/5q8JCRYZxR

The Sun‘s sarcastic editorial is fairly standard for the barrel-scraping tabloid. But The Guardian‘s financial losses, and subsequent rebranding, do pose more questions over the uncertain future faced by the UK’s print media. But in the meantime, it means that there’s a whole internet full of fledgling, independent news sites and publications to explore – one of which you’re currently reading.

Featured image via Wikimedia/Wikimedia and additional image via screengrab