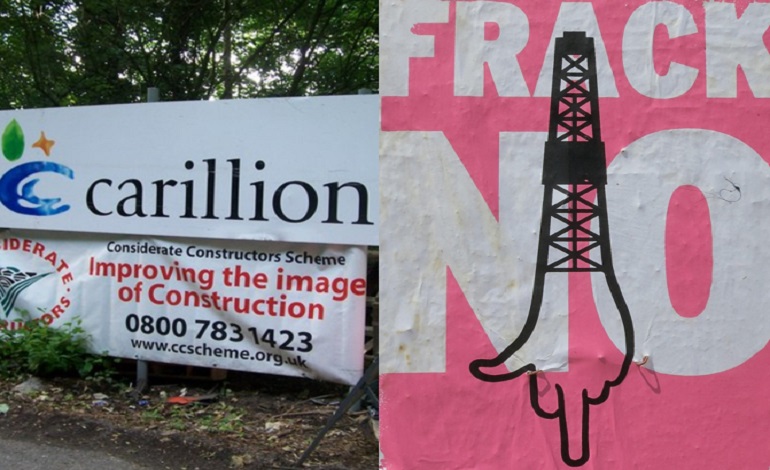 It has emerged that the boss of the collapsed public sector contractor Carillion also heads up a tax-avoiding fracking company. And like Carillion, the firm is in financial trouble, with the government at one point threatening to dissolve it.

The government has granted Third Energy a licence to extract shale gas by hydraulic fracturing (fracking) at the KM8 site. It’s situated in the village of Kirby Misperton in North Yorkshire. Its operations have been controversial, with local residents and campaigners protesting around the site since December 2016. They call themselves ‘protectors’. And they set up the Kirby Misperton Protection Camp to highlight the opposition to fracking that exists in the area.

Third Energy has been dogged by controversy. Its parent company, Third Energy Holdings, is registered in the Cayman Islands tax haven. But its ultimate owner [pdf, p14] is Barclays.

The protectors claim that, although Barclays promised [paywall] to sell its stake in Third Energy, this has not yet happened. And nor has Third Energy filed its overdue 2016 accounts, raising questions about its viability. The government previously issued [pdf] it with a compulsory strike-off notice in December 2016, threatening [paywall] to dissolve it because the 2015 accounts were late.

As with any company placing reliance on another group company for financial support, the directors acknowledge that there can be no certainty that this support will continue, although… they have no reason to believe that it will not do so.

The Official Receiver will be investigating Cochrane, as well as Carillion’s other directors. This could prove embarrassing for the government, as Cochrane has also been Lead Non-Executive Director of the Scotland Office since 2015. And he is a trustee for HRH The Duke of Edinburgh’s Commonwealth Study Conferences. This is a:

Global leadership programme for exceptional senior leaders selected each year from governments, businesses and NGOs across the 52 countries of the Commonwealth.

Leigh Coghill of the Kirby Misperton Protectors unearthed the findings. She told The Canary:

We have looked closely at how Third Energy are running their business. It’s obvious that we cannot trust them to finance either safe working practices or the clean up afterwards when things go wrong. Scores of fracking companies in the US have gone bankrupt leaving a bitter legacy of polluted drinking water and poisoned soil for communities and local authorities to clean up.

The Canary asked Third Energy to comment. It said it did not wish to comment on Cochrane’s involvement in Carillion and directed us to a Times article [paywall]. But it said of its tax affairs:

Third Energy Holdings and all subsidiary companies are compliant with all UK tax policies and we pay our taxes here in the UK. As our trade association has already pointed out several weeks ago, people need to be aware of the facts – all UK profits from oil and gas companies onshore are ring-fenced as part of the tax rules meaning that UK profits are subject to UK tax. The Corporation Tax for UK onshore oil and gas companies is currently set at 30%, significantly in excess of normal Corporation Tax. In addition, the industry has committed to a substantial payment to local communities based on the revenue it generates. The government will also ensure that all business rates will go directly to local councils.

The government: asleep at the wheel?

The fall-out from Carillion’s collapse continues to rumble on. But Cochrane’s roles at Third Energy and within government raise yet more questions about how a huge public sector contractor like Carillion could have gone to the wall, under the not-so-watchful eye of the Conservative government.

This article was updated at 9.50pm on Thursday 18 January to reflect a statement from Third Energy.