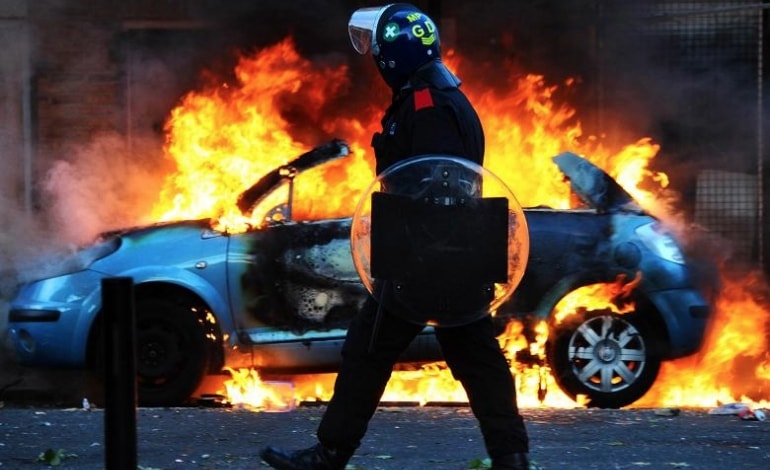 The new Conservative vice-chair for youth Ben Bradley has quickly made the headlines for all the wrong reasons. Bradley came under fire for an old blog post where he advocated vasectomies for unemployed people. But now, another of his posts has come to light. And in this one, Bradley believes “police brutality” was the answer to deal with rioters. This is despite police brutality being one of the causes of the riots.

In 2011, riots spread across the UK. They began in Tottenham after a protest over the police shooting of Mark Duggan. During the protests, the police refused to meet with Duggan’s family and friends. According to Paul Lewis, who covered the protests for The Guardian:

What happened over the next four hours is subject to debate, but what is clear is that tensions gradually escalated, as police made only limited attempts to talk to the demonstrators.

Lewis also reported that it was an incident with a 16-year-old girl that ‘sparked’ the riot:

Others present said the spark for the rioting was a specific incident involving a 16-year-old woman, who stepped forward to confront police around 8.30pm, demanding answers, but was attacked with shields and batons.

“They beat her with a baton, and then the crowd started shouting ‘run, run’, and there was a hail of missiles,” said Anthony Johnson, 39. “She had been saying: ‘We want answers, come and speak to us.'”

And as the protest escalated, a doubledecker bus was set on fire and missiles were thrown.

The riots spread across London and the UK during the next few days. There was widespread damage to property and looting, and five people died.

If we have any sense as a nation we’ll stay home tonight and make it easy for the police to find the ones hanging around town centres with their faces covered. For once I think police brutality should be encouraged!

And he echoed a similar sentiment in another post about the death of Ian Tomlinson. Tomlinson, a newspaper seller, was unlawfully killed at a protest just months before the riots. Bradley wrote:

The government and the judicial system need to stand behind the police and make it clear that they will get the backing they need in such events. If Ian Tomlinson was told by riot police to stop and move away and he didn’t do so, then surely the police have every right to assume that he’s planning something; surely they have every right to treat him as suspicious for their own safety? It’s all well and good the government and the public saying he shouldn’t have been pushed but they weren’t there on the ground having to make the split second decision.

Bradley has since apologised for his comments:

I wrote a number of blog posts when I was in my early 20s and I accept some of the language I used was inappropriate and I apologise for that. They were written at a different time of my life – getting married, becoming a father and now being an MP have changed my outlook.

It wasn’t just in Tottenham where police brutality was blamed for the riots. In Hackney, Lewis argued that tensions with the police, especially over stop and search, were a trigger:

That was a significant driver behind what happened and why many came out to the streets, particularly in some areas. You really got that sentiment in Hackney more than anywhere else that there was this mutual animosity between a sector of the community and the police… When we interviewed police officers some of them actually concurred.

Interviews with rioters across the country also back up this analysis. Many cited incidents involving the police as reasons for their participation. In fact, 85% of those interviewed claimed that policing was an “important” or “very important” reason why the riots occurred.

86% of those interviewed also claimed poverty as a reason behind the rioting. As anti-police-surveillance group Fitwatch noted at the time:

For years the carrot of capitalism has been dangled in front of kids with the stick of police brutality and harassment to keep them in place. Now with EMA [Education Maintenance Allowance] cut, youth services decimated, university unaffordable and mass unemployment, many don’t see a future and no longer have anything left to lose. This is a generation growing up with capitalism blasted in their faces, living in areas colonised by gentrification. Every day these shiny unattainable products are shoved in our faces through advertising, telling us our lives will be happier if we have the latest product, and then we act surprised when people start looting.

Speaking to The Canary, Kevin Blowe, coordinator of the Network for Police Monitoring, stated:

There are no circumstances where actively encouraging police brutality is ever appropriate – when he made these comments, Ben Bradley was essentially calling for officers to act unlawfully. His comments about Ian Tomlinson, an innocent man who died as a direct result of an institutional tolerance for violent behaviour by officers during the G20 protests in 2009, are equally revolting. Sadly, they seem to reflect an unpleasant strand of authoritarianism and lack of empathy within the Conservative Party that has helped to maintain ever more coercive police powers for the last decade.

Bradley may have apologised for his statements, but serious questions need to be asked over whether someone who previously thought police brutality and vasectomies for unemployed people were good ideas should hold such a position of power in government.

Politicians like Bradley also need to start seeing the real root causes of events like the 2011 riots. Otherwise, they will happen again.