The Sun's Brexit tapestry has to be seen to be believed. And even then... [IMAGES] - Canary Workers’ Co-op 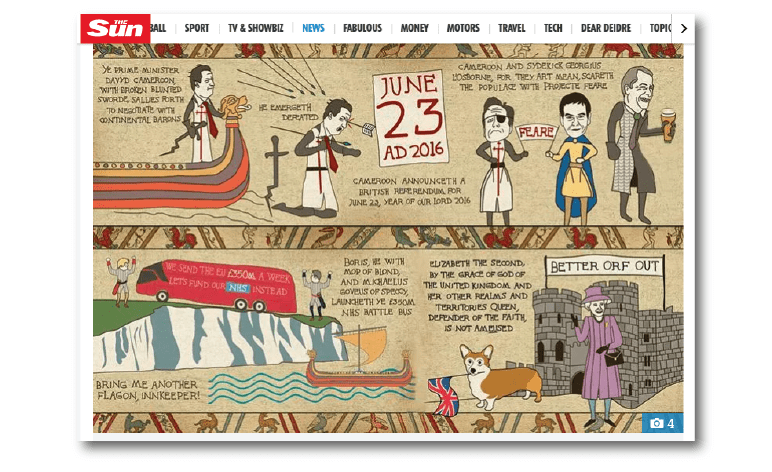 To celebrate the French President loaning the UK the Bayeux tapestry, The Sun has drawn a tapestry of its own. One that quite bizarrely ends with (spoilers) President Macron being decapitated by Theresa May. Somewhat suggesting the goodwill gesture hasn’t generated all that much goodwill.

The Sun introduces its tapestry by writing:

The 11th-century Bayeux Tapestry, which depicts the humiliating defeat, is now set to be displayed in Britain for the first time in 950 years.

Britain faces another moment of destiny as Brexit frees us from continental shackles.

Today, THE SUN marks that historic people’s victory with the Bye-EU Tapestry – proof, if any was needed, that the EU was one long stitch-up.

How exactly the tapestry ‘proves’ this is unclear. Although it does seem to prove that even its supporters see Brexit as a bit of a carry on. One that’s had little in the way of actual, demonstrable results.

The tale begins with Cameron’s failed attempt to make the EU take our demands for straight bananas seriously.

Also pictured is a smiling Nigel Farage. It’s worth noting that this is 2016 Farage though. Not the Farage of today, who last year spoke at a far-right German rally and supported an alleged sex offender. Presumably The Sun wouldn’t picture that Farage smiling. Presumably.

The tapestry goes on to celebrate the ‘NHS battle bus’. A vehicle you may know as the ‘bullshit-mobile’ or ‘fib-wagon’.

This section is all pretty much accurate to be fair. Although it’s worth noting that Gove’s treachery has not been punished by the Murdoch empire; because notably, he was asked to interview Donald Trump for The Times with Rupert Murdoch in attendance. Other forms of ‘treachery’ have been less well received, however. As the paper recently wrote:

THE SUN SAYS Smug Tory rebels should be deselected for betraying both their PM and country.

The truth is they sacrificed all loyalties and duties on the altar of their egos and a bizarre fanaticism for the EU.

Here we get to the most significant (i.e. only) achievement of Brexit so far – the return of the blue passport. And even that’s debatable, as the old passports were actually [paywall] an entirely different shade of blue.

More bizarre is the immortalising of the Brexit stamps. Because despite a Sun campaign, there won’t actually be any. Although that hasn’t stopped people from suggesting their own:

Off with their heads

The tale ends with Theresa May decapitating the European leaders we’re currently attempting to forge a beneficial trade relationship with. It’s unclear how this will further negotiations. It’s also worth noting that, historically, the UK has never conducted a successful trade negotiation with a headless negotiator.

Possibly, this scene has some sort of symbolic meaning. Although that would suggest The Sun was working on two different levels. And as we all know, that’s two more than it’s ever worked on in the past.