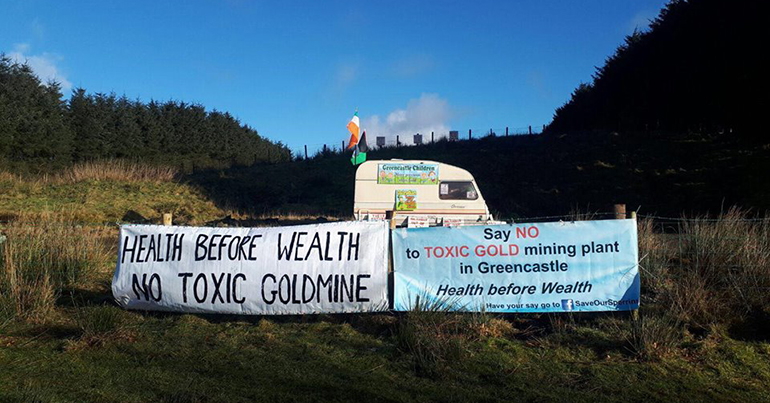 Activists have told The Canary they will “do jail” to stop [pdf] Dalradian Resources’ gold mine in the Sperrin Mountains, Northern Ireland. The Canadian mining company applied to mine in November 2017, and expects to begin full mining within two years.

Locals have grave concerns the mine will pollute their community through the use of cyanide in the extraction process. A similar process at a gold mine in Baia Mare in Romania in January 2000 resulted in cyanide leaking into local rivers and wiping out over 80% of the fish population. The Sperrins are an Area Of Natural Beauty (AONB) and said to be “rich in historic and archaeological heritage and folklore”.

The area is of religious and historical interest. It is thought to be one of the most ancient routes in Ulster and the site of a Mass Rock [paywall] where Catholics attended mass in the 17th century.

Cormac Mc Aleer, a spokesperson for local opposition group Save Our Sperrins, told The Canary he has grave concerns about the use of cyanide. He is concerned about the:

lack of experience and of expertise among the relevant environmental monitoring/enforcement statutory agencies.

Mc Aleer also claims the “lack of transparency that has emerged with Dalradian has exacerbated those concerns”.

A number of incidents at the exploration mine caused local fears to rise. Dalradian’s exploration licence permitted it to remove ore for “analysis, test, trial or experiment”. But it did not permit the sale of ore. But the Crown Estate, which receives royalties on all gold mined, denied this when it was revealed that Dalradian shipped 15,000 tonnes of ore to the USA. The Crown Estate then said Dalradian “has permission to sell any gold”. Furthermore, the Crown Estate’s involvement means it will receive the benefit and not the local region, as claimed.

Safety concerns were raised in early 2017 when personnel from Vertase FLI Limited who were working at the mine suffered serious injuries. And in 2016, Dalradian was caught in a public dispute with the Police Service of Northern Ireland (PSNI) over a £397,000 security bill.

What is happening in Northern Ireland is not just a local issue. The Mining Injustice Solidarity Network (MISN), based in Toronto, aims:

to draw attention to and resist the negligent practices of Canadian mining companies.

According to its website, Dalradian has been “exploring for and finding gold” over the last six years. It has big plans, as CEO Patrick Anderson once declared:

I’m not talking about a single mine. We are working on building a mine camp here.

Dalradian estimates that mining will continue for at least 20 years.

Dalradian refutes local concerns. In a previous statement seen by The Canary, it claims:

Since 2009 Dalradian has informed and engaged with the local community and stakeholders through a variety of means, including newsletters, public meetings, private meetings, site and tunnel tours and via our website and social media. Dalradian also has a Community Engagement Team on site at
all times.

Object to the plan

Those opposed to Dalradian’s application have until Thursday 22 March to object. Save Our Sperrins is hosting a clinic on 22 March to assist those wishing to submit detailed objection letters.

The Canary contacted Dalradian for further comment but none had been received at the time of publication.