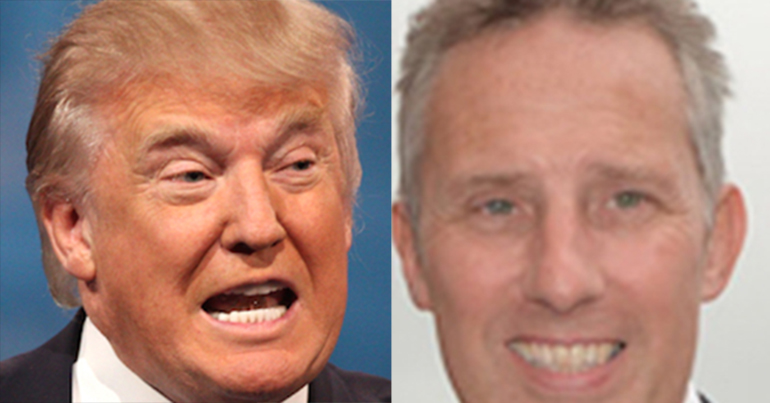 The DUP’s Ian Paisley Jr met the Trumps in the White House and he couldn’t contain his excitement. Staunchly British, opposed to and mocking of Irish culture, the DUP reached peak hypocrisy in attending Irish events to curry favour with Washington this Paddy’s Day.

But leaving the hypocritical nature of the DUP’s anti-Irishness aside for a moment, let’s look at how young Ian slobbered so pathetically over the sexist, racist, Islamaphobic and anti-LGBT Trump, in the Belfast Telegraph. But then sexism, racism, Islamaphobia and homophobia are hardly strangers to the DUP.

Although it reads like Alan Partridge's autobiography, it's actually Ian Óg gushing about the love he received from a racist, bigoted, deeply unpopular leader with an idiot son.https://t.co/BPEdx30d2R

But Paisley also took great satisfaction at how unionists had “outnumbered” the Irish at the Capitol Hill Speaker’s Lunch addressed by An Taoiseach (Irish prime minister), Leo Varadkar. An event that celebrates “Irish heritage”.

Delighting in the “potential opportunities” that Brexit and Trump could offer, Paisley explained he felt:

very honoured to have developed a close relationship with the Trump family.

And, according to Paisley, it’s not a recent development either. It began “many years ago”.

With the awe and delight of a first-time concertgoer, Paisley bragged about the “further privileged access” that allowed him access to the “inner sanctum” where:

no NI person has ever been brought.

Paisley was utterly star struck and revelled at being on a “first name basis” with Trump.

So dazzled was he by the bright lights of Washington he forgot who he was meeting and greeting.

US Republican senator Peter King is a supporter of Sinn Féin. But then King, it would appear, is also Islamophobic.

Having pulled off a “coup” as Unionists “outnumbered” Republicans, Paisley cautioned his fellow unionists:

Be assured, our opponents will have noted this turning of the tide and they will make a concerted effort in the years ahead to wind back the influence. We must not lose the bounce.

He signed off in a tone familiar to the bible bashing DUP collective – “God Bless America”. But just as Paisley couldn’t contain his excitement he shouldn’t contain his surprise when this President dismisses yet another that thinks they’re in the “inner sanctum”.