A former huntsman has been convicted of killing a fox, and the case exposes a crucial loophole - Canary 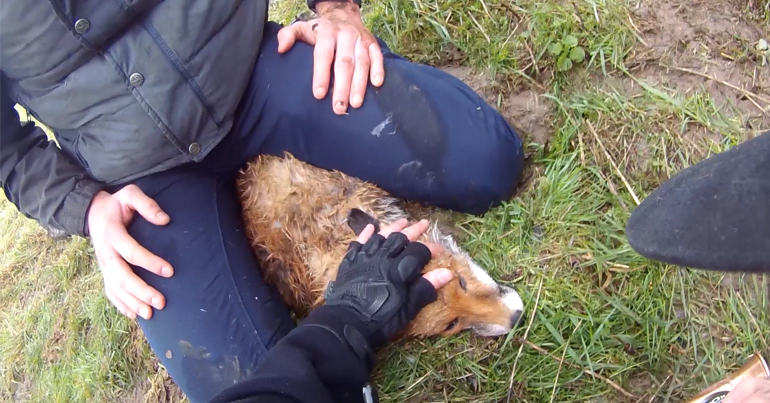 A former huntsman has been convicted for illegally killing a fox. But his co-defendant, a falconer, was cleared of all charges. And it raises questions about loopholes in a law protecting wildlife.

On 4 April, George Adams was found guilty of illegally killing a fox on 1 January 2016. The former huntsman of the Fitzwilliam Hunt, based in Peterborough, was convicted after a two-day trial. But John Mease, on trial for the same charge as well as a second of animal cruelty in 2013, was cleared of all charges.

Video taken by hunt saboteur Stephen Milton shown during the trial revealed Adams hunting with around 40 hounds. Milton also said he had seen no attempt by Adams to call the hounds off the fox, having tracked the animal through the day.

Judge John Woollard is described as saying “it was clear” that Adams had no control over the hounds on the day.

Falconer Mease was present during the 1 January 2016 hunt with a golden eagle. This was described in court as an attempt to use the ‘falconry exemption’ (6a) to the Hunting Act 2004, which allows a fox to be chased by hounds out of cover. But the fox must be killed by a bird of prey once on open ground.

Peterborough Telegraph reports that Prof Stephen Harris, who spoke during the trial, explained:

Hunts would regularly use packs of dogs with up to 40 hounds before the hunting ban was implemented, but hunts using birds of prey in the past would only use two or three to catch the fox.

The Hunt Saboteurs Association (HSA) also reported on 3 January 2016 that:

the eagle [the hunt] had present was never un-hooded and not in a position to fly.

However, Mease was cleared of charges relating to the New Year’s Day hunt. And he was also cleared of a second allegation of unnecessary cruelty to an animal after he stuck a knife into a fox’s eye.

Prosecutor Joe Bird described the attempt to use the falconry exemption as a “smokescreen”. And a magistrate at the trial appears to have agreed. Chris Luffingham, director of campaigns for the League Against Cruel Sports (the League), said:

The magistrate said this huntsman was trying to cover up illegal hunting by pretending to use a bird of prey.

Loopholes were allegedly introduced into the Hunting Act after Tony Blair, whose government introduced the law, spoke with a hunt master. The most famous is trail hunting, in which hunts claim to follow an artificially laid scent. But the falconry exemption is also widely used.

In 2005, soon after the Hunt Act came into force, the Department for Environment, Food and Rural Affairs (DEFRA) said the exemption would be unlikely to provide legal protection for hunts. It wrote to Protect Our Wild Animals, a hunt monitor group, saying:

Employing (whether or not released to hunt) a bird of prey which does not ordinarily hunt that particular wild mammal [would be illegal] … because, in our view, it suggests that the flushing was not for the purpose of enabling the bird of prey to hunt the mammal.

And an article in The Guardian notes that a golden eagle “only takes small fox cubs in the wild”.

Falconry bodies were also opposed to the exemption. In 2005, a chairman of the Hawk Board told The Guardian that “hunting and falconry… are not compatible”. And a chairman of the Council of Hunting Associations said the body had “concern about the welfare of birds”.

In the same article, the League is quoted as saying:

The technical exemption in the Hunting Act is for falconry not foxhunting. Using a falcon as an excuse would be laughed out of court. This is truly farcical.

And Adams’ conviction appears to bear this out.

The falconry exemption defence’s failure to stand up in court is an important milestone in the fight against hunting. Following Adams and Mease’s trial, HSA spokesperson Lee Moon said:

The guilty verdict today proves that hunting with a full pack of hounds is not the same as Falconry and the judge in summing up confirmed as much. The outcome today will of course have wider reaching implications for all those hunts around the country who claim to use this exemption.

And given the widespread use of birds of prey by mounted hunts in England and Wales, the impact could be huge.

– Check out Hounds Off if you are having problems with hunts trespassing or damaging your property.