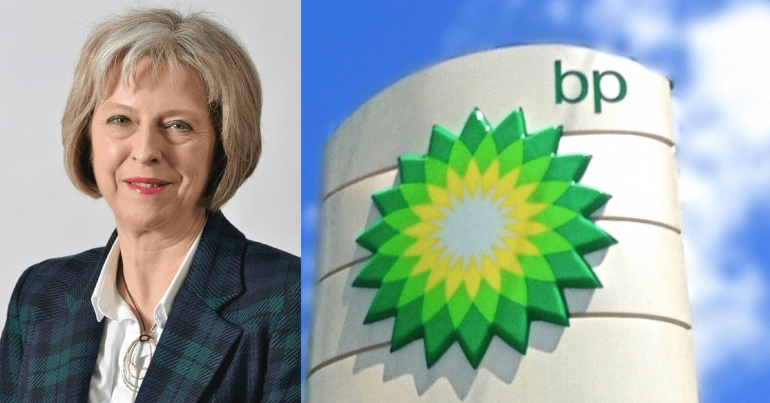 Campaign group Culture Unstained has obtained emails highlighting how the UK government has been cosying up to oil giant BP. There is a worry that the UK government is prioritising corporate interests over the public interest. And BP’s track record on climate change really brings this issue into focus.

The UK government’s relationship with BP

Dear Greg, this is a very important meeting for us this year and it would be very much appreciated if you could join us this year.

Clark didn’t make it, although climate minister Claire Perry was “delighted” to go instead.

These meetings are the result of a “strategic relations” programme or ‘buddy’ scheme that the government introduced [paywall] in 2011. The scheme helps big companies forge closer ties with ministers in key positions of power. In 2013, Greenpeace told the Guardian that the growing list of companies in the scheme could skew policy “towards narrow corporate interests rather than the wider public good”.

Dudley previously said that Cambridge University should “come to its senses” and not drop its investment in fossil fuels.

The problem with BP

Tom Burke, the chairman of climate change think tank E3G, said BP’s low-carbon strategy “is a 20th century response to a 21st century problem”. This is because the corporation’s strategy doesn’t include a target for reducing the burning of oil and gas – which is how BP contributes to climate change the most. BP has plans to reduce its operational emissions; but as Luke Sussams of Carbon Tracker told the Guardian, these:

while welcome, are too small to move the needle to prevent runaway climate change or reduce BP’s exposure to carbon risk.

The corporation’s strong ties with the government concern all of us and will affect our future in dramatic ways. So we have a right to know exactly what this relationship is like.

– Read more articles from The Canary on Environment.