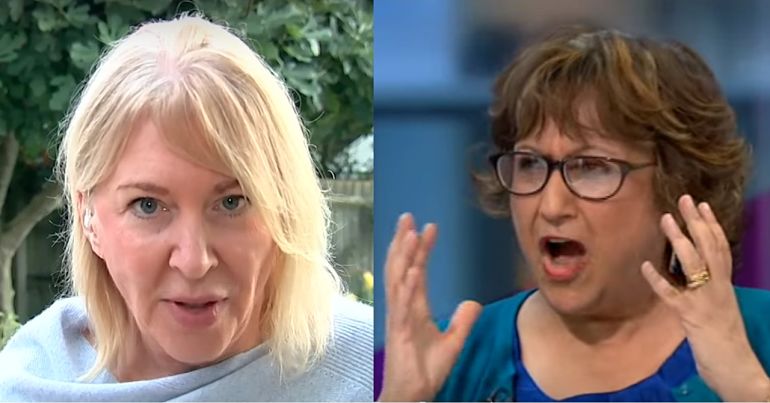 The very day that the Conservative Party launched its plans to tackle abuse on social media, one of the party’s own MPs was busy harassing a British journalist for being born in another country.

It’s standard racist fare to silence criticisms from ethnic minority citizens with demands for gratitude and fealty. In working-class communities, that sounds like: “Shut up or go back to where you came from”. Middle and upper-class racists have been taught to couch the same message in less easily damnable language. Enter Nadine Dorries, Tory MP and all-round UKIP-alike blowhard. 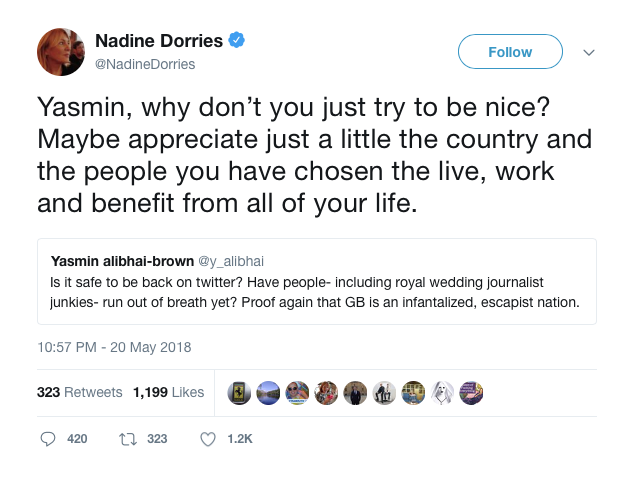 When Alibhai-Brown, a veteran of British journalism, challenged Dorries over the comments, the Tory MP accused her of ‘playing the race card’:

Seriously Yasmin, the last time you and I were together you apologised to me for being so ‘hateful.’ Below you to play the race card, you’re better than that. Have a nice day. https://t.co/0ve1VCSLHM

So much for the respect pledge

The timing is almost as outrageous as the comment itself. Earlier on 20 May, digital minister Margot James outlined the government’s plans to tackle online abuse. The measures included fining companies which publish or incite abuse against people in public life. And party chair Brandon Lewis has been very vocal about the need for less abusive politics:

"We have got to crack down on this kind of behaviour"@BrandonLewis calls on Labour once again to produce their own Respect Pledge and join us in stamping out online abuse. pic.twitter.com/hphXuxuspS

A day later, a serving Tory MP has made an overtly racist public attack on a veteran British journalist; a woman whose Ugandan-Asian heritage should not be fair game to her critics. The reaction of the Conservative Party will tell us everything we need to know about its commitment to tackling online abuse and racism.