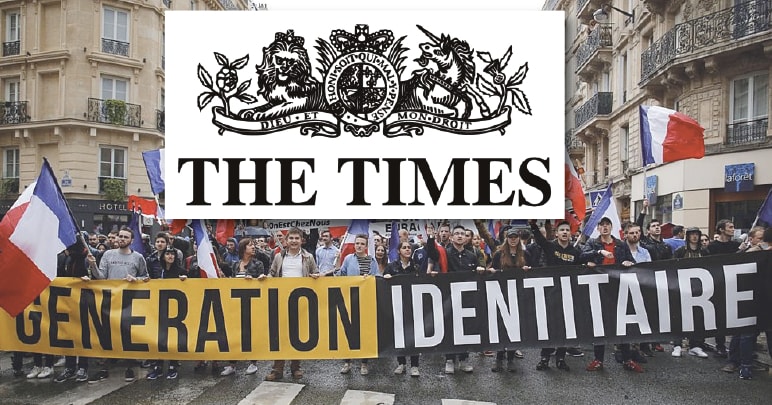 On Sunday 20 May, Rupert Murdoch’s Sunday Times tweeted a link to an article on young British fascists. The tweet drew such a negative response it was deleted.

The Times appears to have deleted their disgraceful "hipster fascists" Tweet. pic.twitter.com/hfI55F082m

Although the tweet didn’t give a complete picture of the article itself, it has drawn attention to wider problems at the Times.

People were quick to point out the issues with the tweet:

Fixed that for you, ya weird Nazi-enabling old shits pic.twitter.com/YLoq1Domc7

But there is a difference between the tweet and the article, as the author has been pointing out online:

Classic case of reading only the tweet and not even the first sentence of the actual piece…"breathing new life" is a quote from Hope not Hate; "hipster fascists" a quote from another anti-racist group https://t.co/MRXCqvYUfS

But the opening of Gilligan’s article [paywall] reads quite differently, as much of it is taken from quotes:

A 23-year-old City banker leads a movement of young “hipster fascists”, which is “breathing new life” into the British far-right, according to anti-racism campaigners. Middle class and well-spoken, dressed in skinny jeans and New Balance trainers rather than bomber jackets and boots, members of Generation Identity (GI) are accused of using slick branding and coded language to “normalise” extremist views.

Journalists working in the mainstream media often don’t have any say on how their work is published and promoted. As such, Gilligan has some right to be angry, but his anger should be directed at the Times.

It’s well known that social media links and headlines are read far more [paywall] than the stories they’re promoting. It’s also far from the first time an outlet has been accused of ‘normalising’ modern fascists. There have been muliple articles detailing this in recent years. And professional editors at the Times should be aware of the far right using image as a ‘propaganda tool‘:

The problem goes beyond social media too. This was the print edition: 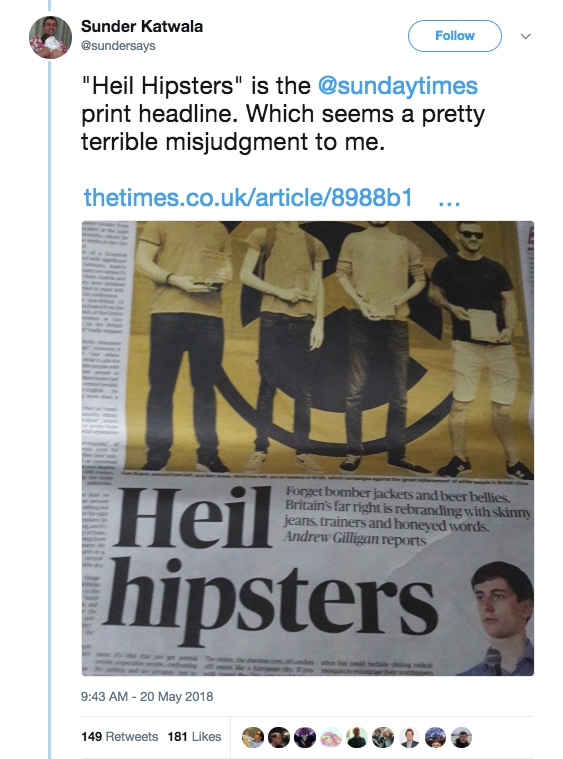 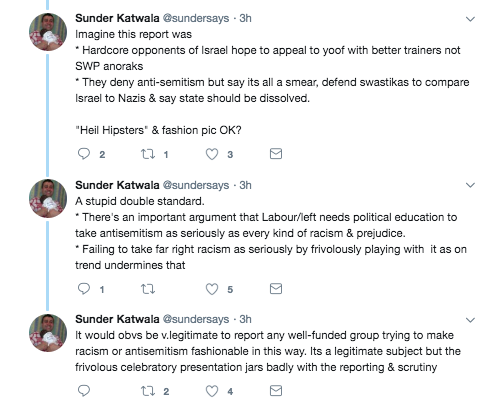 The problems with the article also run deeper. And the Times can’t escape its own track record when it comes to how people engage with its articles.

Reading between the lines

One thing people are pointing to is the obvious class issue (the following tweet also references an article from the Mail):

Sometimes the press doesn't even attempt to hide the prejudice it has towards the working class. Middle class women do drugs shock! A middle class fascist! These are things for the commoners surely. pic.twitter.com/Z2XihjKWan

it’s also in a sense about the quality of them. The older traditional lot are seeing them breathe new life into the movement. We haven’t seen someone like [Dupré] in a while . . . a young, articulate, normal-looking far-right activist who works at a bank like Standard Chartered.

Yet Gilligan does nothing to point out the problem with this language. Expressing shock when middle class people are bigoted is dishonest. The “hipster fascists” are not exceptional in many of their beliefs. Just look at some of the politicians in UKIP or the Conservatives.

Islamophobia is a fiction to shut down debate

This is a popular argument among the far right. The Times has also fallen in with the right in its demonisation of trans people. And Gilligan is one of the journalists there who has published multiple, non-favourable articles on the subject – some of which turned out to be untrue.

The Times can’t publish articles denying Islamophobia and bashing trans people and expect to escape scrutiny on how it covers fascists. Gilligan’s article wasn’t what the tweet suggested, but that doesn’t mean it was without fault. The media need to do a better job reporting on the far right. Especially when they’re more likely to call out the targets of bigotry than the bigots themselves.