The Philip Cross scandal: How Wikipedia is being used against left-wing journalists - The Canary 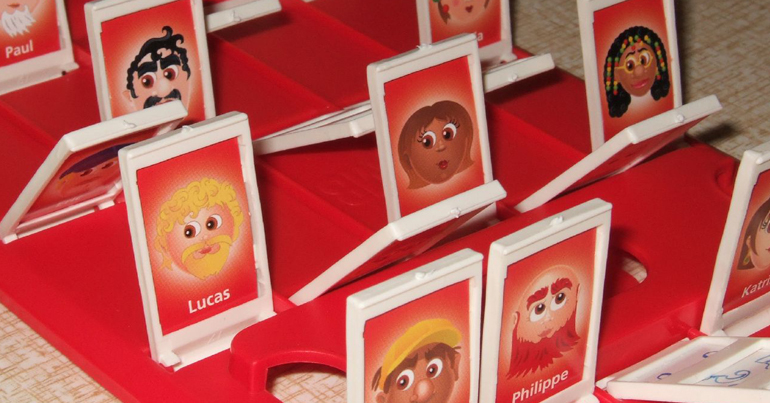 A mysterious Wikipedia editor named Philip Cross has made more than 130,000 edits to pages across the online encyclopaedia. But questions are being asked about who the editor is and what his motivations are.

Cross is a frequent and prolific Wikipedia editor – or ‘Wikipedian’ – who’s made approximately 134,000 edits over 14 years. That’s an average of 27 edits every single day. The Wikipedian has been particularly active since September 2012, making between 737 (August 2013) and 2,385 (April 2018) edits per month. And he does these consistently through the day, from 8am to 10pm. But it’s not just his doggedness that has begun to raise eyebrows.

On 18 May former UK diplomat Craig Murray published The Philip Cross Affair. Murray voices his concern that Cross’s intention is to

attack and undermine the reputations of those who are prominent in challenging the dominant corporate and state media narrative.

And he goes on to highlight a number of prominent left-wing figures whose pages have been a particular focus for the Wikipedian. These include:

But Murray isn’t the only one raising questions. Media activists FiveFilters have also published an extensive insight into Cross’s Wikipedia activity. It provides examples of politically motivated editing, including:

Cross doesn’t like Sheffield University professor Piers Robinson. So, he edits his Wikipedia entry and removes the fact that Robinson has written for the The Guardian… and throws in an unsourced claim about journalist Eva Bartlett (someone else he doesn’t like) and then tries to make a tenuous, defamatory connection between Robinson and another one of his targets (journalist Vanessa Beeley).

Other people and outlets have also begun talking about the mysterious Wikipedian. They include news analysis site Media Lens:

At least one @Wikipedia editor 'gets it' on what the 'Philip Cross' affair could mean for @Wikipedia.https://t.co/BlmJbVm8DG pic.twitter.com/sfpSfwZjAj

Its Wikipedia page has had 851 edits by Cross (57.27% of page total) and is the editor’s second most active page.

Wikipedia stalker-troll Philip Cross’s ´hateful activities’ twice brought an ex-MP close to suicide & might have pushed me over the edge too if I didnt have family/friend support. @jimmy_wales ´s frosty attitude towards the multiple victims of Cross is shocking, to say the least.

And even Wikileaks thinks there’s something odd going on:

The Canary has also been subject to the Wikipedian’s edits. User Jupitusese created The Canary’s Wikipedia page on 2 June 2016 at 11:41pm. Cross made his first edit at 8:55am the following morning: 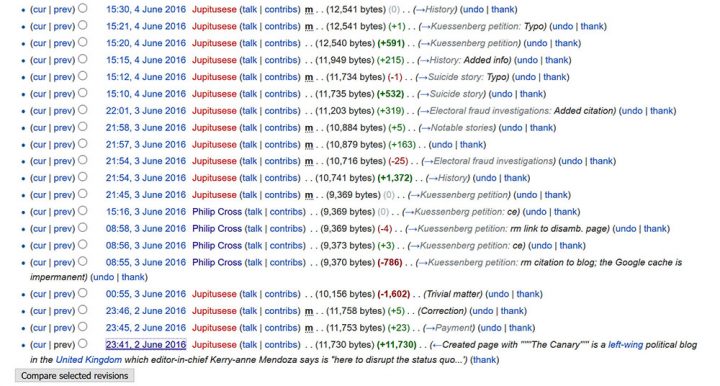 Cross has remained a regular editor of The Canary’s Wikipedia page since. At the time of publishing, Cross’s last edit was on 26 February 2018. He’s made 37 edits, or 18.59% of the page’s total revisions. Many edits appear to be minor, such as grammatical corrections. But others are more loaded.

One edit on 30 November 2017, for example, sees Cross extensively modifying a quote about The Canary by Carl Miller of the Demos thinktank.

The original includes Miller describing “the rise of the digital world” (and, by implication, websites such as The Canary) as “democratizing” as well as “an echo chamber”. Cross’s edit leaves just the section about echo chambers. Though Cross justified the edit as being a “better reflection of the original”, it loses the nuance found in Miller’s original quote.

And Mike Barson, a member of ska band Madness, revealed that Cross had edited out a section on his page relating to The Canary.

Ha I read your article and had a look at my wikipedia page for a laugh and what do you know there was Philip Cross, he removed a comment on my page about momentum from an article in the @TheCanaryUK from @MrTopple wtf! pic.twitter.com/piWqn4rqRn

The reason for the edit is given as “BLPSOURCES”, referring to the “BLP problem”. This is information in ‘biographies of living people’ that lacks sources or is unreliable.

There have been many guesses about the Wikipedian’s identity. But concrete information has so far remained elusive. And responding to questions, Wikipedia founder Jimmy Wales believes people’s complaints about Cross are “so wrong”.

Because as far as I can tell so far, those complaints are so wrong as to be risible. Look into it further. Or show me some diffs.

Cross has also edited pages relating to art, music, history and architecture. Yet political subjects remain the editor’s focus. And, as FiveFilters points out, there is a bias over years of Cross’s editing – not only negatively impacting left-wing and anti-war figures but also positively impacting right-wing figures. These include Times journalists Oliver Kamm and Melanie Philips.

FiveFilters explains why Cross’s apparent political editing is a problem:

Wikipedia entries very often appear first in search results, and so for many will be the first and only port of call when researching something. People unaware of the political nature of the editing that goes on on the site, in this case supposedly by a single, dedicated editor, are being seriously misled.

The mystery of Cross is still unfolding. But the whole case hammers home just how critical we all need to be as readers of, and subjects to, the media. Not just the mainstream media, but even apparently neutral outlets such as Wikipedia. So we must remember to approach all platforms with a critical eye, especially those that initially appear unbiased.

– Support The Canary so that we can continue casting a critical eye over politicians, events and the mainstream media.